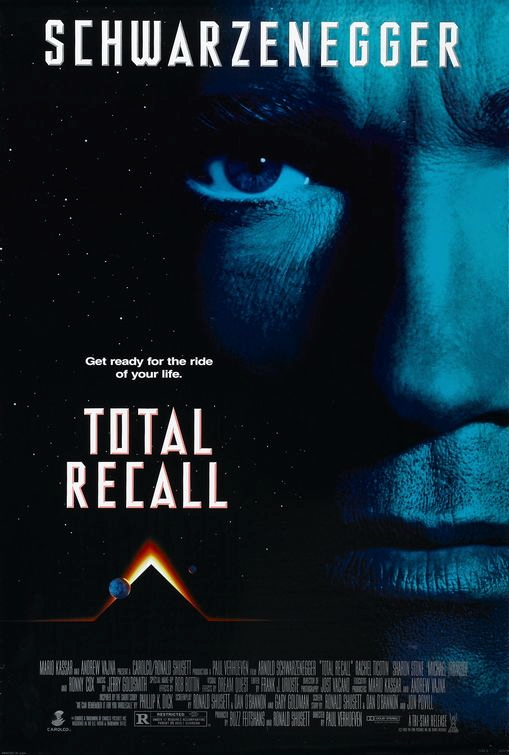 “The year is 2084. Douglas Quaid is a construction worker, every night Doug has been having horrible nightmares about the planet Mars and it has become very obsessive for Doug. Doug goes to Rekall Inc. a company that sales false memories of ideal holidays. When Doug has a false memory of a holiday on Mars implanted, it all goes terribly wrong. Doug has lost his memory and he is being chased by a group of assassins and his beautiful wife Lori is a agent who claims his whole life is a fake and he isn’t who he is. After discovering he is Hauser, a former Mars Intelligence agent, Quaid goes to the colony on Mars, in hoping of finding answers. Where he meets a woman named Melina who is working for rebels and the assassins are working for Vilos Cohaggen, the colony’s corrupt administrator. As Doug sets out to discover who he is and why Cohaagen is after him, Doug not only is finding answers, he also begins to question reality. Is the events of Rekall INC, being chased by assassins and going to Mars really happening? Or Is it all a dream?” (courtesy IMDB)

More than three decades ago director Ridley Scott brought Philip K. Dick‘s novel Do Androids Dream Of Electric Sheep? to the screen as Blade Runner (1982), and the darkly moral cybernetic thriller changed the way Hollywood felt about the future. A spate of moody science fiction films – some adapted from Dick stories, others simply inspired by Blade Runner – followed Scott’s landmark production. Then Total Recall (1990) blasted onto cinema screens, mostly set on Mars and starring Arnold Schwarzenegger as an adrenalised version of Dick’s tortured modern man lost in a maze of alternate realities. The original screenplay for Total Recall was written by Alien (1979) creators Dan O’Bannon and Ronald Shusett, based on the Philip K. Dick story We Can Remember It For You Wholesale.

Producer Dino De Laurentiis took on the project, to be directed by Bruce Beresford starring Richard Dreyfuss, and began pre-production in Queensland, Australia. Unfortunately, when Dino’s Dune (1984) flopped at the box-office, the producer lost all enthusiasm for Total Recall, but the collapse of Dino’s company provided an opening for Arnie, who purchased the film rights for only US$3 million and negotiated a salary of US$10 million plus 15% of the profits, with complete control over the entire production. He had veto power over the producer, director, screenplay, co-stars and promotion, immediately hiring Dutch director Paul Verhoeven, fresh from the blockbuster RoboCop (1987). Total Recall was one of the last major Hollywood blockbusters to make extensive use of miniature effects rather than computer generated imagery. Only a year later, James Cameron‘s Terminator II Judgment Day (1991), also starring Arnie, prompted a revolution in special effects with its extensive use of CGI.

In 2084 everyman Doug Quaid (Arnold Schwarzenegger) has an ideal life with a steady construction job and a loving wife (Sharon Stone). But constant dreams of another life on the now-colonised Mars leads Quaid to Rekall, a retail outlet that implants fantastic virtual-reality memories into your brain. Opting to enjoy a spy fantasy, Quaid’s procedure apparently fails when Rekall workers uncover previously embedded memories in his mind. Following his Rekall visit, Quaid is suddenly attacked by coworkers and even his wife, who explains that she is really an agent pretending to be his spouse. Now on the run, Quaid receives a suitcase from Hauser, his former self, which includes a video explaining that he must travel to Mars. Once on the red planet, Quaid meets up with Melina (Rachel Ticotin), the girl seen in his dreams, in a small mining colony tightly restricted by Vilos Cohaagen (Ronny Cox), a ruthless politician who controls the price and flow of oxygen. In addition, Cohaagen’s shoddy buildings have created mutants from Mars atmosphere and an insurgency, which Quaid soon discovers he was a part of.

Walking a fine line between reality and imagination, Verhoeven’s Total Recall plays out like a science fiction version of North By Northwest (1959). Although hardly the embodiment of the average guy, Arnie is still commendable as the paranoid Quaid, never quite sure if he is living or dreaming. Verhoeven actually shot the film to support wither the reality or hallucination theory, as Quaid’s adventure does not truly begin until he is in the Rekall chair. In the end, it is up to the audience to decide. As with Verhoeven’s other science fiction movies RoboCop (1987) and Starship Troopers (1997), the director piles on the ultra-violence (enough to garner an Adults Only rating on its original cut) but leaves out much of the black comedy that made his other films so unique. Despite being a blockbuster action flick filled with trademark Arnie one-liners, the screenplay retains many elements of its inspiration, most notably Philip K. Dick‘s wariness about government agencies and corporations. 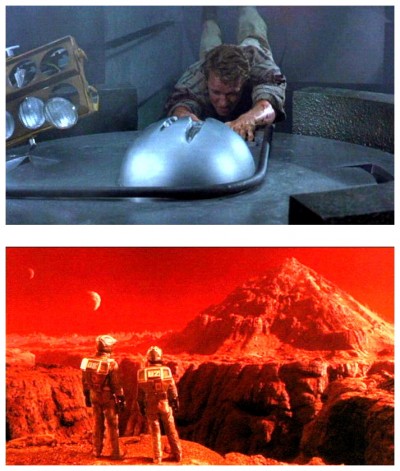 The jarring score by Jerry Goldsmith is an exciting one indeed, reminiscent of his soundtrack for Capricorn One (1977), and Total Recall also displays a dazzling collection of practical special effects courtesy of Rob Bottin and his crew, such as Arnie pulling a tracking device out through his nose, Marshall Bell‘s full-body makeup of rebel-leader Kuato, and an elaborate mask that comes apart in sections – a scene in which, unfortunately, the animatronic framework can clearly be seen. As a matter of fact the production is riddled with minor problems that could only be solved with CGI rig removal, such as the crewman’s head that can be spotted behind behind the bed during the first sex scene, or the tracks of the camera dolly when Quaid gets in the Johnny-Cab (Robert Picardo), or replace the stuntman’s face clearly seen when Quaid jumps onto the subway car, or Sharon Stone‘s rubber knife blade. Ironically, Total Recall was overtaken at the box-office the following year by the even-bigger Arnie vehicle Terminator II Judgment Day (1991), which officially ushered in the era of computer-generated effects and rig-removal.

Vigorous box-office response to Total Recall led screenwriters Gary Goldman and Ronald Shusett to scout potential source material for a sequel, seizing upon The Minority Report, a Dick story first published in 1956. The story concerns John Anderton, a middle-aged chief of a future Washington DC Pre-Crime law enforcement division, accused of murder in a world where precognitive telepaths – Pre-Cogs – predict impending homicides with unerring accuracy. The premise failed to work as a sequel to Total Recall but, rewritten by Jon Cohen under the title Second Sight, the material eventually attracted the attention of actor-producer Tom Cruise, who presented the screenplay to filmmaker Steven Spielberg. But that’s another story for another time. Right now I’ll ask you to please join me next week when I’ll have another opportunity to sterilise you with fear during another terror-filled excursion to the back side of Hollywood for…Horror News! Toodles! 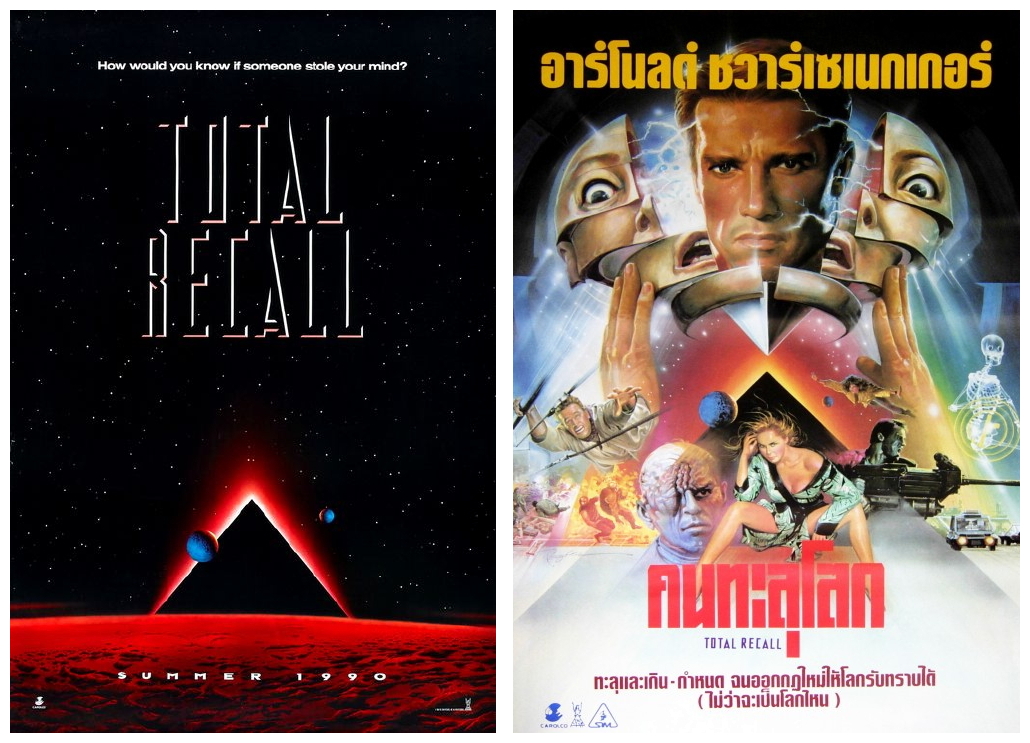