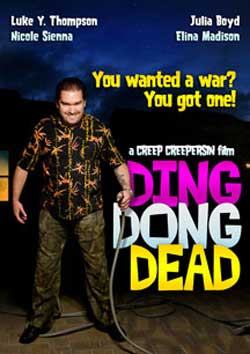 A gang of lovely young ladies known as the Ding Dong Ditchers terrorize a sleepy suburban town by ringing peoples’ doorbells and then running away. Crazed and pathetic loser Doug has just been fired from his job, so he decides to make a stand against the Ding Dong Ditchers in order to impress Claudia, who’s the attractive woman who lives right across the street. However, Doug’s initially minor dispute with the Ding Dong Ditchers eventually escalates into an all-out no-holds-barred war.

With today’s struggling economy, young adults find difficulty managing a stable job, and look to different outlets of entertainment to get by on a very low income. Along with the advent of a media laden society, young adults have also become more socially inept, and unable to deal with reality. In Creep Creepersin’s Ding Dong Dead, a recently jobless man deals with a group of misanthropic females who continue to play on the childish game of ding, dong, ditch while trying to impress his recently widowed neighbor fighting his societal self esteem issues.

Doug (Luke Y. Thompson) is overweight, single, and awakens to his phone ringing letting him know he has been laid off from his only legitimate lifeline of a job. He lies to his mother when she calls to ask if he is doing well, and finds refuge in gawking at his across the street dweller, Claudia(Elina Madison). He daydreams of ways he can hit on the hot chick from across the yard, and goes over passionate scenarios in his head of what life would be like if he could get over his raging self consciousness issues. When he finally walks out to pursue the young vixen, they engage in conversation about rampant noises being heard from outside their homes.

When Doug goes to the local ampm for late night refreshments, he runs into the gang of young women all clad in black. He complains about their unwillingness to vacate the road, and harasses them until they finally get out of his way. This inadvertently starts a war with the gang, as they begin to ring his door bell, and when he answers the front door, there is no one in sight. This goes on all night, until he confronts some of the young women in his back yard.

They play pranks on him, like spraying him with the hose and he is none too pleased with their weird behavior. When a dispute between two of the door bell ditches ends with one of the girls being dead, the war escalates when the women blame Doug for the mysterious disappearance of one of their sisters. Doug must decide once and for all what to do about these pesky doorbell ditchers, whilst proving himself before Claudia.
Creep Creepersin’s Ding Dong Dead is a low budget and campy, as most of the film is shot within the director’s own home and the actors wore their own clothes in the production. The music is digitally made and repetitive, as listening to the same two themes within the whole flick. Ding Dong Dead builds up to the very end, where Doug goes on an epic killing spree of bloody proportions, not letting a group of girls get in his way while talking dirty to them that he has difficulty doing in one-on-one situations with potential girlfriends.

In a little over an hour’s time, Ding Dong Dead tells a comical story about what happens when a silly game is taken seriously, and turned into an all out bloodbath by the what seemed to be harmless victim. The movie serves as a lesson to those who continue to mess with the wrong people will be reciprocated dangerously when taken the wrong way.