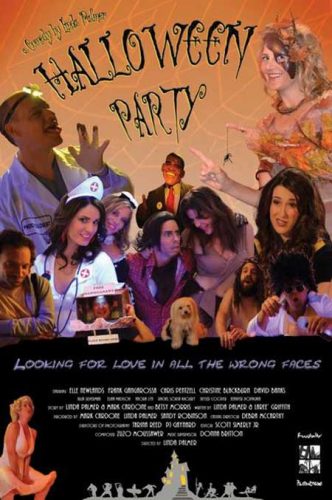 Ben and Julie’s annual Halloween Party is about to go off the Richter scale, when their single, high maintenance girlfriend drags in a homeless guy, thinking he’s a party goer, because she needs an escort.

Halloween Party is the first feature length film from Writer/Director/Producer  Linda Palmer,  and boy is it a wild ride.

First, I have to say the soundtrack to this film is really fun.  And these people love Halloween in a big way. Ben (Chris Pentzell) equips his little dog with a camera so he can watch what goes on at the party, and also has cameras set up around the house.  Ben and Julie’s (Christine Blackburn) friend Erin (Elle Newlands) needs a date for the party, but is also trying to avoid her ex Donny (David Banks), who will also be at the party. Erin has dated everyone they know. 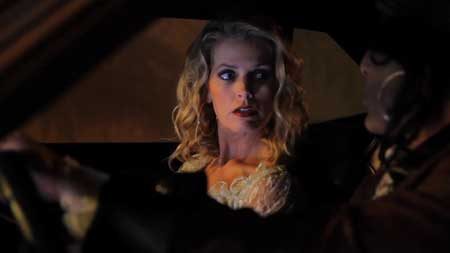 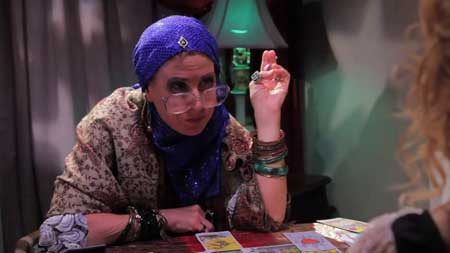 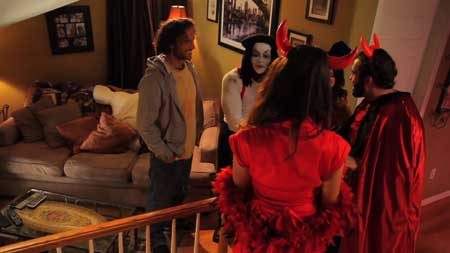 There are so many colorful characters at the party, including Elvis, Obama, Sarah Palin, Marilyn Monroe, a Mime, and many more.  Erin meets a homeless guy in the alley outside the party and forces him to go to the party with her. Mason (Frank Gangarossa) the homeless guy is mainly concerned with how bad he smells. Music, dancing and drinks for everyone.  Now this is a party! For a low budget film, they did a pretty good job with the crazy characters and keeping it interesting. Yes, the costumes are campy, but they are fun.

Cole (Danny Pardo) and his wife Penny (Andrea Leithe) enter as the couple of the night, dressed as a Pirate and a Wench. They really can’t stand each other and soon Cole is trying to hook up with some girls. In fact, everyone is trying to hook up with everyone.  Cole and Penny are just one example of the many relationships you get to see the dynamics of during the party. As crazy as it may sound, this is a movie about relationships. Erin is checking out every guy at the party as a potential date, while other party goers are checking out the homeless guy and how he smells. The interactions between the party goers are sometimes hilarious and sometimes sad.  The acting really isn’t bad, and most of the characters are really likeable.  Throughout the party, there are intimate webcam scenarios of various guests. 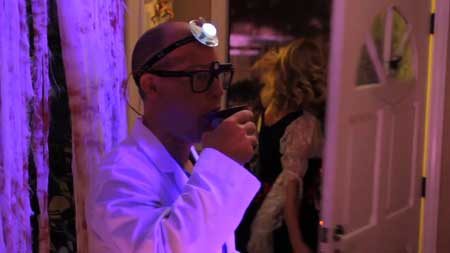 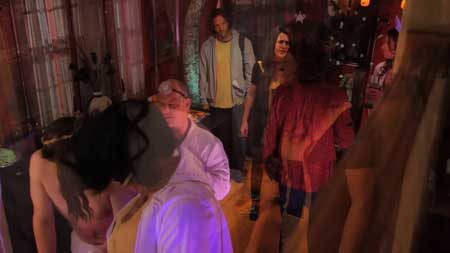 People are hooking up and sharing stories about their party escapades.  Erin’s ex Donny, is literally trying to hook up with every girl at the party.  Donny is definitely the kind of guy that you probably don’t want to hook up with, and the fact that he’s dressed as a really bad Werewolf makes it even funnier. There is a scene with a spider where everyone freaks out, that made me laugh out loud.  I also found it really funny that trick or treaters come to the door during the entire party and random people give out candy and sometimes other things. I mean this party is wild, so the little kids coming to the door was just comedic.

A mysterious fortune teller is telling people’s fortunes, but Ben and Julie can’t figure out who she is or where she came from. This party is madness.  Erin has lost Mason the homeless guy, and is fed up with the other guys at the party, and gets some relationship advice from Julie.  After finally finding Mason and having a heart to heart talk, Erin realizes that Mason is pretty likeable and finds out that some of the other guests know Mason from church. 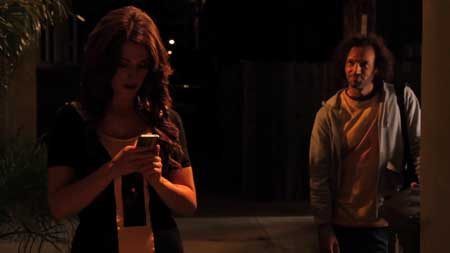 Donny realizes Mason is  homeless  and wants to expose him, but that doesn’t go the way he planned.  Mason’s true tragic past is revealed, and Erin has an encounter with the mysterious fortune teller, that Ben and Julie think doesn’t exist.  Almost everyone is getting naughty at the party, while Erin, Donny and Mason have a confrontation. 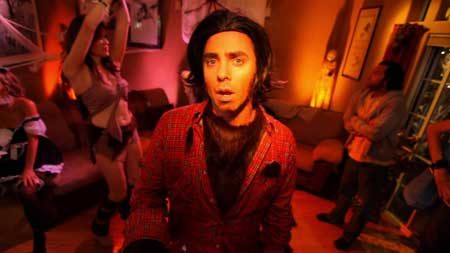 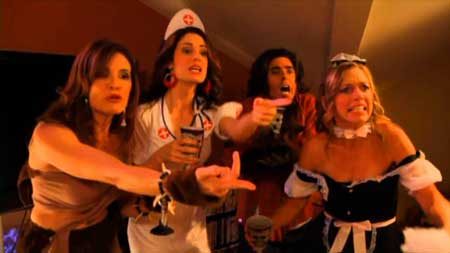 They manage to get away from Donny, and while Erin is getting Mason cleaned up, Donny ends up in a pretty hilarious, but awful situation for the end of his night.  Somehow Mason ends up dressed as a fortune teller, which is pretty symbolic, if you’ve paid attention to the film, and he and Erin leave the party together.  We finally get to see Ben and Julie’s mysterious daughter who is mentioned several times during the party and, with the exception of a few unfortunate characters, the party has a happy ending.  I was left wondering  if Erin finally found a real relationship with Mason.  I hope she did. This movie was fun.