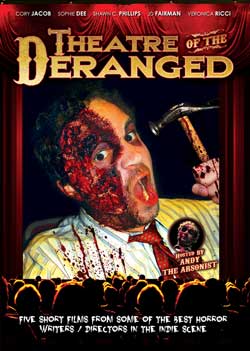 Andy the Arsonist welcomes everyone to his theater of derange for a wild night of thrills, chills and spills. Andy kick’s off the night by hosting five short horror films from some of the best Horror Writer/Directors in the indie scene.

As this film is actually an anthology containing five short indie films (each done by a different director), I thought that it would actually be more appropriate to review each one individually. Between and introducing each segment were little comedy skits by the quirky ‘Andy the Arsonist’, which, although there were some funny moments, I did find a little irritating and thought he should just shut up. 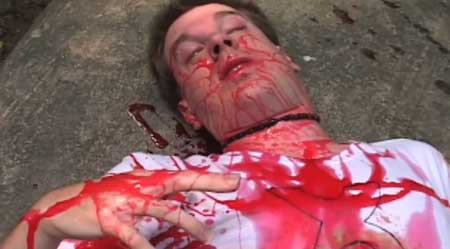 First off, there’s Lust for Blood by M. Kelley and Shawn C. Phillips, which I definitely think is the weakest of the selection. For this reason, I find it unusual that this one was chosen to go first, as this immediately put me in a disappointed mood. This short film told the story of a guy who goes to a carnival and ends up turning into some sort of monster, who spews out green vomit and likes to tear people open with his bare hands. There’s a nod to the original Evil Dead there with the ‘visceral’ effects, aiming at disgusting the audience as opposed to scaring them (I’m sure one of the victim’s insides looked like spaghetti in tomato sauce, but what do I know). The storyline was weak, the acting was weak and I didn’t really find any way of enjoying it, not even in the campy z-movie kind of way unfortunately.

The second segment was Bad Dennis by Liz Gilbert and it was already a vast improvement from the former short film. The storyline here was solid and whilst not the most imaginative in the world, for the purposes of a 15 minute short film, did just fine. This was about a group of four young adults (whose acting is fairly atrocious, I have to say) travelling to some mysterious ‘haunted tree’ as part of some apparent dare about ‘getting it on’ beneath it. With the perfect backdrop of gloomy English weather, the group get a little lost (as per usual) and encounter a bizarre witchcraft shop on their way. Once they finally arrive, things take a turn for the worse when they start disappearing. One girl is tied to a chair and tortured whilst the other three wakes up in a giant hole in the ground designed to be a prison. Though this might sound like the standard proceedings of most slasher movies, the delightful twist here is that the director plays on our sense of reality, creating scenes in which the characters were just dreaming. This harks back to the first Final Destination film where the gift of foresight is seen as perhaps not quite so great a gift after all. 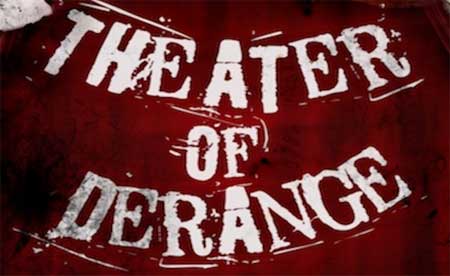 Thirdly, the segment Speak Easy by James Cullen Bressack which is personally my favourite of the anthology. This one introduces us to two guys (best friends) at the aftermath of a party of some sort. One of which seems to be in a rather foul and mysterious mood and the other, blissfully ignorant. They have a rather stilted, serious conversation about a girlfriend having an affair with someone and a desire to acquire a gun. All seems like a fairly typical drama film, when all of a sudden the audience is given an insight into what is really going through the man’s mind – and it ain’t pretty! This short film could be described as minimalist, and it is definitely the least gory and messy out of the lot. However, it was the best shot, edited and acted which makes it far easier to get into and enjoy than the others.

Next came Doll parts, by Brian Dorton and this fell into the fairly average and unmemorable category for me. It starts when ‘Travis’ (the main antagonist of this short film) was just a boy but who already displays disturbing behaviour. He quickly does away with his guardians and then the film jumps ahead to when he is now an adult. Still in the business of killing, his spree continues and there’s even a twist involved for us when we discover who his accomplice is. Despite the fact that the beginning has a more ‘artistic’ style (opting for black and white colouring), the rest of it soon descends to the traditional horror mayhem – even offering us some boobs and full frontal male nudity. I’m afraid to say that this segment was by no means the highlight of the anthology and gets vastly overshadowed by its crazy neighbours. 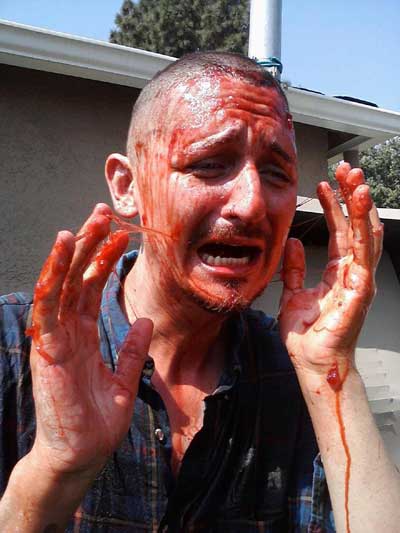 Finally, and perhaps the most memorable and ridiculous, the short film Cannibal Blood Girl by Creep Creepersin. If you like your horror full of big-breasted ladies and blood splatter then this is definitely the one for you. The story here is that a bunch of guys have managed to ‘pull’ two women and lead them all the way to a secluded alleyway. The main man starts to boast about a famous rape and murder case of a p*rn star that happened a while back, stating that it happened in this very spot and that the killer was never found. The women start to get freaked out but things are interrupted when revenge is sought by a blood drenched, angry looking lady (completely nude, I might add). This manifestation promptly attacks everybody in sight by spraying them with some kind of skin melting acid from her mouth, nipples, vagina and ass, as far as I could tell. Obviously, this short film was designed to be totally outrageous and it did make an impression which is important. However, this ludicrous approach to horror is not for me and I wasn’t inspired to check out any more of the director’s work.

All being said, Theatre of the Deranged is a mixed bag of treats and features films of varying degrees of goodness. It’s a pretty diverse range and so there’s bound to be at least one that takes your fancy. But I will say this – this is one to rent and not one to buy, in my humble opinion.