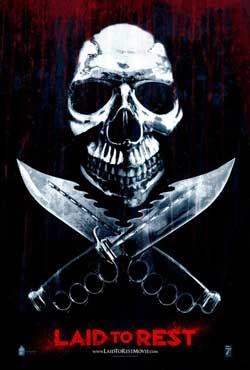 Amnesiac wakes up in a coffin and is stalked for fun by a spree killer in a silver-plated skull mask who videotapes his gory adventures.

The Examination: The nearly-washed-up stalk ‘n slash motif gets an elevated upgrade in this tech-oriented chiller with solid performances and nervously realistic gore.

You have to appreciate a movie that doesn’t prance about with its intentions. Laid to Rest is a joint venture between director/producer/effects guru/multi-hat cat Robert Hall and co-producer/lead actress Bobbie Sue Luther. Following on the heels of his non-horror vehicle Lightning Bug, Robert Hall (a hot commodity around Hollywood for his effects work in television with Buffy the Vampire Slayer, Firefly and Terminator: The Sarah Connor Chronicles, plus films such as Quarantine, Lackawanna Blues and the upcoming Crazies) takes it to the limit in his first official solo horror flight with the redder-than-cherries Laid to Rest. 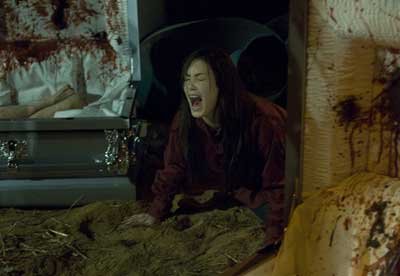 Pitting his audience right into darkness from the immediate frame as Bobbie Sue Luther (known only as “The Girl”) wakes up from a traumatic head injury inside a casket, Laid to Rest plucks the pulse without hesitation. To think it took a good bit of the way of the creepy Serpent and the Rainbow to fling us into this dreadful plunge… By the time Luther escapes the coffin in an out-of-nowhere morgue, she is immediately faced with not only amnesia but the terrifying prospect of being the plaything for a Destro-faced killer with a penchant for filming his murderous ways with a shoulder cam. Dubbed “ChromeSkull” (Nick Principe), the sadistic face-plated superhuman chases Luther from the morgue as a deliberately-prolonged shadow in what is to be read as him making his own realistic horror film.

As Luther stumbles across a local do-gooder Tucker (Kevin Gage, also of Heat, Con Air and G.I. Jane) who whisks her to safety with his wife Cindy (Lena Heady, as in the titular lead of Terminator: The Sarah Connor Chronicles), ChromeSkull makes his way to their domicile, dicing up anyone unfortunate to cross his path with a jagged hunting blade appearing to be made of military-sanctioned steel. Having traced “The Girl” to her hideout, ChromeSkull serves Cindy a brutal, cranial-carved death before Tucker and “The Girl’s” eyes. Laid to Rest then kicks up another notch as our leftover protagonists try to elude their violent pursuer.

Our duo recruits the assistance of an unlikely hero Stephen (Sean Whalen, a guy with a billion credentials ranging from Batman Returns to Revenge of the Nerds III to Men in Black) who is mourning the loss of his mother and forced to enter the same morgue where “The Girl” claims herself to hail from (we learn her true origin later, a hooker from Miami) and also where his mom’s remains are.

ChromeSkull dispatches more victims in glutinous fashion, including a particularly nasty sequence where Cindy’s brother, Johnny (Johnathon Schaech, of Prom Night 2008, Masters of Horror and Quarantine fame) has a spectacularly meaty face-splitting end. By the time our defiant triumvirate locates the car ChromeSkull is using and they’ve found a body in the trunk along with his series of gruesome videotapes, he has hunted them down to a convenience store where complete havoc breaks loose. 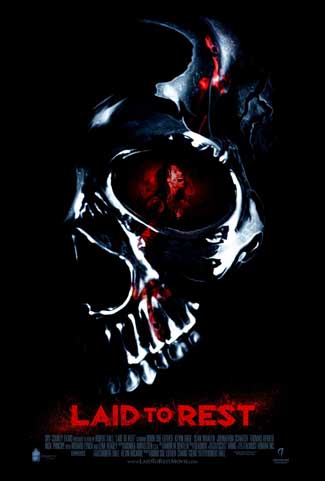 Capturing his extended “star” for his penultimate real-time horror film (a not-so-subtle spike at the oversaturated reality television phenomenon?), ChromeSkull forces “The Girl” to get him more videotape at the store, communicating with her via soundbytes from his video cam as well as through text messages on his personal cell. You might say this is an inventive way to keep true to the hushed essence of past film slashers yet still get into their debauched minds. As ChromeSkull taunts “The Girl” before she tips off the store clerk (Lucas Till, recruited from Robert Hall’s Lightning Bug), a pair of bumbling college idiots become part of the insanity figuring into Laid to Rest’s moist culmination.

We’ll save the splatterific kill scenes to your imagination until you’ve seen the film, but let’s just say Robert Hall had everything from The Evil Dead to Dead Alive to crime scene photos in mind as ChromeSkull has his way with the trapped group. Never mind the sicko fate of our killer… At this point, ChromeSkull has pinned “The Girl” in a cooler with the severed head of one of the victims and has her play a tape which finally gives her clue to her identity, the catalyst leading to the punchy final frames.

What’s particularly good about Laid to Rest is how Bobbie Sue Luther shows moxy in the film’s finale in what should be a natural reaction to someone’s who has been through everything she has. Additionally, ChromeSkull bears an innate fear face for a generation trying quite hard to find its own Voorhees or Myers and generally falling on its ass in doing so. Instead of kick starting what’s been done in the past, Luther and Hall use their own minds and resources to tell a pretty nervy tale woven in the tradition of eighties cut ‘em ups, yet there’s very little pretention here. Laid to Rest takes itself seriously with almost no humor and very little easing of the trigger. It’s a bloody mess, which Hall meticulously researched to make his screen kills as visually impactful as possible. No split-second clean cuts here; ChromeSkull takes sick pleasure in what he’s doing and the gorier, the better for him. 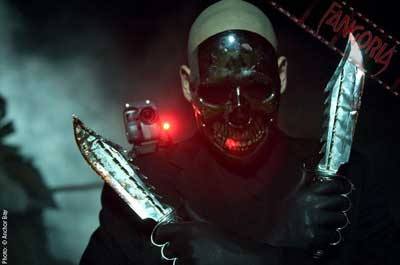 Certainly fans of this style of horror are going to drop right into this film’s palm because Laid to Rest demands them to. Whether or not ChromeSkull goes on to become a cult legend of horror, let’s hope there’s no sequel planned. As much care as Hall and Luther put into this film, the ending seems appropriately finished and to drag it out even further would rob Laid to Rest of its impact.