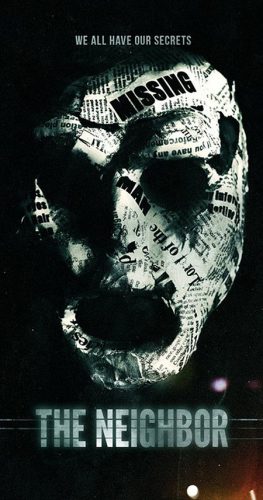 John and Rosie are drug traffickers looking to leave their lives behind. While saving for an escape to Mexico, in the town of Cutter, Mississippi, their lives become threatened by the secrets of their neighbor.

Another entry in the long line of horror movies positing the south is a haven for violent murderers. The Neighbor is director Marcus Dunstan’s third movie starring leading-man Josh Stewart. Similar to their last two collaborations The Collector and The Collection, this film has Josh Stewart once again as a home invader stumbling upon something gruesome. This is a more subdued movie, focusing on the thriller and suspene aspects where the first two focused on the violence and gore. It’s a director retreading the same ground, yet a tense refinement to well-worn territory. 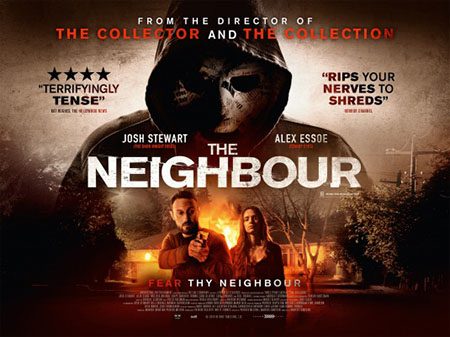 Josh Stewart is doing the best tired-eye mumbling acting of his career as the uniquely named John. His wife and partner is Rosie played by Alex Essoe, who has the doe-eyed look of someone destined to be kidnapped and tortured. They long to be rid of their stagnant existence switching license plates on cars which are running drugs for John’s Uncle. Uncle Neil is being played by veteran Skipp Sudduth with all the subtlety of a crowbar to the face. They’ve even begun planning to escape in the night, accruing the standard, suitcase full of cash. It’s a dangerous life, which is shown with not one but two scenes of drivers arriving covered in their or someone else’s blood. These moments add little to the overall driving narrative which like the lead’s morality, is murky.

John and Rosie live next door to Troy, a seemingly standard good old boy, who enjoys two things, shooting rabbits and privacy. Bill Engvall as Troy makes the last steps of the journey he started in Blue Collar Comedy Tour, from white trash comedian to white trash kidnapper. There’s no point in the film where the threat is anything other than Troy, which adds to the formulaic nature of “The Neighbor.”

Much of the early exposition, the drug running and Uncle Neil, seem to service nothing but getting the movie padded to an hour and a half. The movie is called “The Neighbor,” not “That Guy Next Door Seems Harmless.” Some of these characters reappear during the climax of the film it’s startling, and out of place. The audience has moved on from the world of drug running into the equally bloody world of escaping from a madman’s basement. There’s generally a tone shift in horror movies once the threat is realized, but this was particularly jarring.

Through a telescope, Rosie sees Troy chasing down and murdering a young man. Fearing that this may not be a good thing, she tries to flee. John returns from his shift in the drug barn, to find her missing. Having working eyes and ears, he immediately suspects that the gun obsessed weird guy next door may have something to do with it. He waits for Troy to leave his house; I assume to buy more bullets, and sneaks in.

At the point in which John enters the house all sense of reality is kicked out the door. The sheer outlandishness of the writing goes beyond the standard horror movie logic. Luckily nothing stands still for you to really think of how ill-conceived much of the plot devices are. The last half hour flies by as John attempts to thwart the plans of Troy and his family.

There’s a time and a place in the world of horror for The Neighbor. It’s after you’ve been drinking all night and want to watch something which requires no thought. Even the title suggests simplicity, a laziness bordering on disdain for the viewer. It’s as similar to Marcus Dunstan’s previous work as to be indistinguishable.

A capable piece of directing, standard acting, and enough drive to keep you awake until the end. However, nothing within will buoy it above the slew of slasher films being released every week. It’s content for the sake of being content. With so many loud, unique voices shouting for attention, this is an easy film to see sink to the bottom.