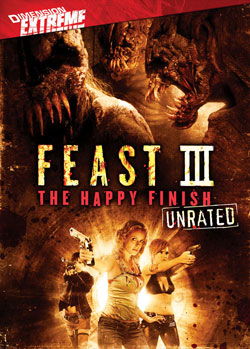 As the flesh-eating beasts continue to devour what’s left of humanity, embattled survivors Biker Queen, Bartender and Lightning do their best to stay off the menu in this third installment of the funny and scary Feast franchise. But a new hope dawns when our heroes meet a karate fighter with a taste for knives and a man who seems to know how to contain the monsters. Craig Henningsen and Juan Longoria García star.

Are you man enough to take the Feast ride? Well if you are then get ready for Feast 3: The Happy Finish. Now in all fairness I should point out the this film is part of a 3 part series. Feast 1 could stand on its own however, Feast 2-3 really requires watching both. Feast 3 begins right where #2 left off and if you remember correctly #2 had no ending. So we pick up right where #2 stopped. Not a typical move for horror films but if you can squeeze in all 2, then you’ve got quite a ride of gore horror in store for you. Similar trends can be found in the “Lord of the Rings” series and even Dimension’s own “Pulse” series. I suppose it tempts you more to buy all 3, however if you like the goods then that shouldn’t be a problem.

From a production point of view, #3 looks like it was a “set to set” plan. Meaning they didn’t stop filming once 2 was completed. Back to back the same looks, camera techniques and direction is apparent in both films (not to mention the actors and costume carryovers). Though as crude as #2 was, #3 heightens the levels even more! Now by crude I’m talking gore extremes, boobs, violence, gritty camera looks, campy lines with campy characters, extreme chaos, massacres and more…it’s pretty much all here. No, if you haven’t guessed this is not your Sunday family movie choice or something you should turn your kids on to. However, if that doesn’t bother you, then you got some solid ass kicking entertainment coming at you.

The Feast creatures themselves are pretty horrific though they are your classic men in suits kind of monsters. They fit the bill with slobbering, bleeding, crapping, violating, and spraying red and green ooze as much as possible. In the horror genre, I know many who were disappointed in films such as “I am Legend” that could of made a better impression without CGI characters and went for practical effects. I myself felt the same way and am just fine with the Feast monsters. In retrospect I like to call them the “Sigmond and the sea monsters” on bloody filled crack! The purpose of these things seems pretty basic. Kill, eat, fornicate, reproduce and dismember.

No complicated plot narrative to confuse the issues, just attack mode 24-7. They also seem to have a certain sense of humor if not for the films themselves. These things rip arms like butter, eat heads and crap them out, drop kick torsos, have sex with victims while planting there hybrid seeds and that’s just getting started. If Dimensions Extreme or John Gulager had any intentions, it was exactly how it’s served up to us. Some scenes spray so much blood and gore that the actors must have been cleaning there pores for days.

Now my favorite part to this third release was the mix of characters that get introduced. Never have I seen so many potential movie heroes lose there life so quickly after introductions. Some one comes to save the day, and then gets eaten quickly after. This is the trend and style of Feast 3 and (Feast 2 for that matter) The band of biker chicks are back in round 3 and most of them topless throughout the movie. We have a few familiar faces from last round that get taken down in the worst ways. As each chacter is introduced, we get a quick stats and info slate so we know who we are dealing with. Characters like “Shit kicker” and “The Prophet” provide comic relief in there campy on screen apperances.

What’s the whole purpose? Again the survivors are just trying to get out of Dodge without getting dismembered, eaten or screwed. As they battle against the Feasters up top they finally smarten up and take it below the streets and into the sewers. Though in the spirit of the film they of course run into more creeps and danger that just creates more mess than it’s worth. In the style of classic comedy horror films, Feast 3 delivers all the goods in the most demented ways possible. Comparison to films like “Return of the Living Dead” and older Troma releases came to mind but regardless the Feast series stands on it’s own. I believe it has all the makings of a horror “cult” film that will find its way into a much viewed circle. My recommendation is go out and buy the “3 set” when it comes out so you can get the full Feast experience. Great gags, gore and madness! Gulager proves he has the goods to entertain and make people laugh.