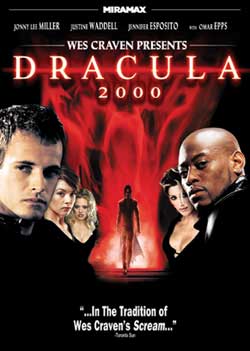 A group of thieves break into a chamber expecting to find paintings, but instead they release the count himself, who travels to New Orleans to find his nemesis’ daughter, Mary Van Helsing.

Van Helsing has become an antique collector. Or so it seems in the modern world which is currently free from vampires. Though our much older Abraham Van Helsing (Christopher Plummer) is hiding a dark secret in the bowels of his mega-security safe. When a group of thieves break in to uncover what they “think” will be a heavy load of antiquities and riches, they find that inside this creepy old secure dungeon is nothing more than alot of decorative artifacts and a metal coffin. Solina (Jennifer Esposito), an office assistant to Van Helsing has organized a professional heist only to find this single protected piece which they believe is filled with jewels. As attempts to open it prove to be futile, they decide to take the coffin with them as they flee the scene.

Abraham who knows better, leaves immediately in fear that the contents be uncovered releasing evil upon the world. As you can guess, this age old relic is in fact the body of Dracula, who has now been awakened into the year 2000.

Van Helsing has been keeping him hid well under maximum security for several decades. Van Helsing also has a daughter – Mary Heller-Van Helsing, which is played by Justine Waddell. Mary has a psychi connection with Dracula almost as soon as he is awoken. Van Helsing knows that Dracula will seek her out and in turn reveal her bloodline.

Jonny Lee Miller brings his lead role of Simon Sheppard to us as the younger protege. He has suspected something not quite right for awhile and finds what he is looking for when he follows Van Helsing into the lair of the beast. The two of them are intent on capturing or killing Dracula in fear of what he can unleash on the world.

Van Helsing also seems to have a rather odd hobby that has kept him alive…injecting leeches blood into his own that lay dormant on Dracula’s corpse.

“Dracula 2000” has plenty of violent vamp kills and done so in more hipper presentation than more traditional vamp films. There are plenty of recognizable stars in this film, but it is Justine Waddell who has that subtle sexy empowered-victim feel working for her to the highlight of the film.

The movie proves to be violent, sexy and action filled as directed by Patrick Lussier (who did the editing on TONS of horror films) While the legend is pretty well known, it is the additional facts that are tied to the Dracula legend that prove to be a welcome change. Those elements are best left for the viewing experience, but I did like the attempt on a different take and presentation.

The “Dracula 2000” release did well enough that it doubled its investment. With $28,000,000 allocated for the project, it’s a good guess that the money went mostly to top actor fees. The films inspired several follow up sequels making it into a small franchise of sorts. The original actors never did reprise their roles making the follow-ups less of a talent pool draw.

Gerard Butler plays Dracula almost too well in this early appearance that matches actor with character to the T. “Dracula 2000”, while not Gerard Butler’s first role, is probably the one that introduced his talent to the world. Since “Dracula 2000”, Gerard has become a major player in the film industry often cast in edgy and violent roles.

“Dracula 2000” remains one of my top favorite vampire films. It’s rich cast is certainly topped by the concubine collection of Jeri Ryan, Jennifer Esposito and Colleen Fitzpatrick (Vitamin C) who give this modern tale a sexy vamped up presentation. In fact it’s that single scene of the 3 of them seductively closing in that I think is a reason for return. If you are curious about the franchise, I’d say skip the sequels and put you money on the original.