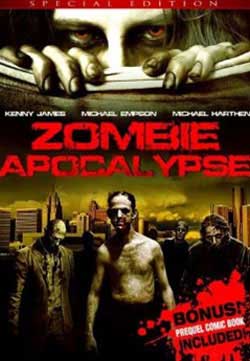 When college roommates Mark and Tom go out for a night at the bar, the last thing they expected to find was a machete wielding stranger and a horde of the undead. With the help of amateur photographer and video store clerk Raven, the unlikely party fights their way into an epic conflict between the living…and the dead. Zombie Apocalypse is a feature-length over-the-top action/adventure/horror movie…made for a shoestring budget of only $5000! It’s roots are in the style of the blockbusters of the 1980’s, John Carpenter films, and the energy of video games. Zombie Apocalypse has scenes of exciting action and intense drama, but it never takes itself too seriously for too long. It’s pure escapism and a good time at the movies.

It focuses on four main characters and their adventures after a zombie outbreak spreads throughout the country. Miller: the mysterious stranger searching the country for his long-lost wife, who herself has ties to the creation of the zombies; Mark, a bullheaded college student with a chip on his shoulder and an axe in his hand; Tom, Mark’s video game playing medical student roommate; and Raven, a rebellious video store clerk and amateur photographer who goes from depressed to overjoyed once the zombies hit. Throughout the movie they meet a host of other characters including a mob of survivors who call themselves The Marauders, shadowy agents, an Illuminati-style organization, and nemesis from the past. Zombie Apocalypse is a great example of how an entertaining movie can be made for next to nothing. Enjoy it, and have a good time!

Zombies are all the rage…in fact every other month it seems like another chapter of zombism is created and contributed to the genre with a varied approach, take or purpose. Zombie Apocalypse, a low budget release under the wing of Phantasmal films is one such new addition. Now upon investigation it looks like the film was completed roughly around 2007/2008, though as of review an IMDB profile seemed to still be missing. This latest release is actually more of a special edition which includes a nice prequel comic book issue #0 and additional DVD extras. 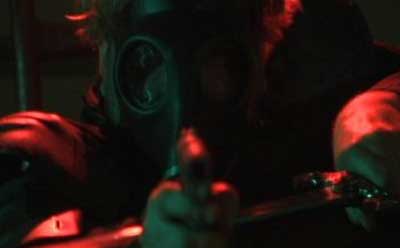 One of the refreshing stand-out traits that ZA offers is an almost sense of live animation by usage of lines and dialog that echo straight out of a comic book. In fact a a few scenes and framing choices might also suggest an influence there as well. For some reason a highlight for me was the shortlived standout character of bouncer Vince Fontaine…..whos confidently announced “this ain’t my first rodeo” will put a smile on anyone’s face.

Miller played by Kenny James is our token hero who seems to come from a line of actors in this film with vocal tones straight out of a Batman movie. Miller is referred to as the original zombie hunter who at the films intro we find gets to see the first release of zombified humans into the word by a man who is referred to as Agent Net. His mission is to find his wife, who may have had a huge part in the zombie outbreak.

The fun really begins at a local bar where 2 room mates Mark and Tom quickly become part of a zombie vigilant team by default and much to their surprise. A group begins to assemble as each adorns a primitive weapons of choice in attempts to just stay alive. They are joined by photographer Raven and eventually run into a group called the marauders who are a hodge podge of zombie killers bent on building their forces up. Mark and Tom are best friends who’s different personalities seem to compliment each others with a nice blend of character roles. 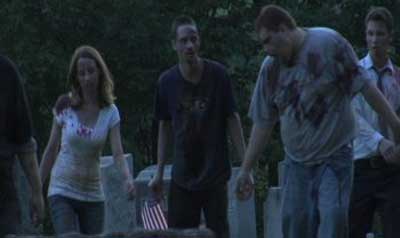 Makeup and Fx and kept minimal, however the shots are still optimized with use of angles and choice editing.

There is alot of detail behind the scenes that viewers will have to pay attention to to get the full story here. Of course, zombies are somehow a direct component of secret societies, experimentation and what not. Though as the title suggests, all hell is breaking loose which means the remaining survivors will most likely find each other and attempt to kill off as many of these dead revived folks as possible. ZA uses a nice mix of character interaction to blanket the low budget aspect. Lines are smart and planned nicely enough that we are at constant engagement with a mix of subtle humor and gory hack and slash extermination scenes. 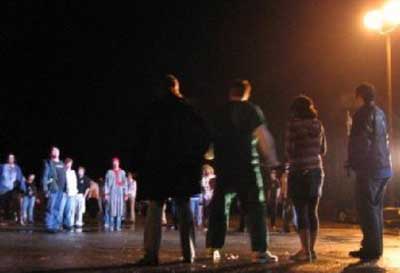 If you didn’t catch it in the synopsis, this film was created with a meek budget of $5K. Anyone in the business knows that on some sets that may only cover the cost of craft services and gas to the set. Director Ryan Thompson may be in demand for just that fact alone ….being able to stretch a no budget scenario into a feature length film. Zombie Apocalypse has character, charm and mayhem all rolled into one. A smart fun good time chock full of zombie chaos.