How To ‘Make’ A Monster 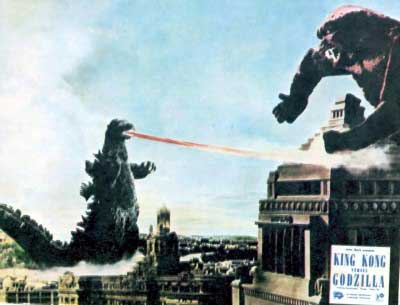 How does one identify a monster? The question is easier to answer by example than definition. In movie terms, a monster is something unnatural, dangerous and out of control. King Kong (1933), the Frankenstein (1931) monster, Godzilla (1954), Dracula (1931), Ray Harryhausen’s cyclops from The Seventh Voyage Of Sinbad (1958), the Alien (1979), The Mummy (1932). That’s the monster A-list, but gobbling along in their wake are the tentacled, radioactive invaders of the fifties – The Thing From Another World (1951), The Man From Planet X (1951), The Blob (1958), Robot Monster (1953), the giant ants of Them! (1954) – and the semi-supernatural hard-to-kill franchise slashers of the seventies and beyond (Michael, Freddy, Jason, Pinhead, Ghostface). Currently, we also have an influx of Far Eastern-influenced grudge-holding spooks (Sadako, Samara, Kayako). These are the monsters we don’t argue about. 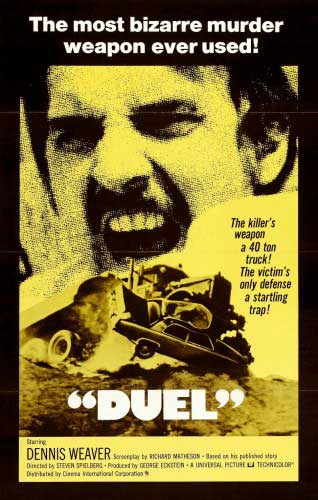 But what about the truck in Duel (1971) and the shark from Jaws (1975), entirely natural menaces treated by the director as if they were monsters? The fire in The Towering Inferno acts like a classic fifties monster, rampaging to teach a gruesome lesson to the smug, wealthy, conscience-less Frankensteins who financed the skyscraper but cut corners on the wiring. The fire is even doused by the same actor who had frozen The Blob, Steve McQueen. What of Norman Bates of Psycho (1960) and Annie Wilkes of Misery (1990), human shells for their demonised psychoses? Al Pacino’s Tony Montana in Scarface (1983), strutting as if through the ruins of Tokyo, cut down by the sort of firepower usually reserved for Godzilla? Even the title stresses Montana’s physical monstrousness, while Pacino’s Cuban accent belongs in the same category as Bela Lugosi’s and Gary Oldman’s Transylvanian accents. To the right-wing, the benefit mother of Ken Loach’s Ladybird Ladybird (1994) is as much a monster as the Alien Queen. From another political perspective, Gordon Gekko – even the name evokes fifties mutant movies – in Wall Street (1987) is as dangerous as any blood-drinking, castle-dwelling vampire prince. Do real-life serial killers count, or made-up one’s like Hannibal Lecter? Maybe, but the 2003 film Monster is called that to make you ask yourself whether ‘monster’ is a fair or adequate label for Charlize Theron’s Aileen Wuornos. 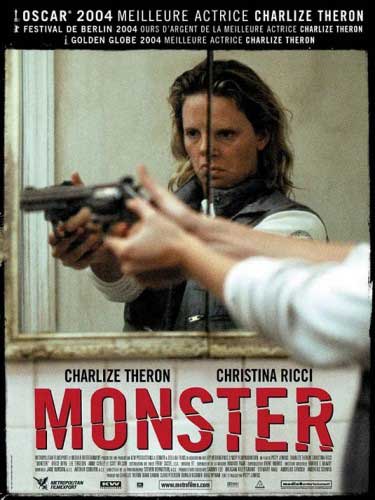 The monsters of Monsters Inc. (2001) are shaped like monsters but act like big softies rather than chewing the heads off terrified children. It’s not enough to look monstrous, or The Elephant Man (1980) would be up there with the Neanderthal Man. A movie monster has to act like a monster, and be framed by the filmmakers as a monster. When Jurassic Park (1993) came out, Steven Spielberg and Michael Crichton claimed it was about prehistorical animals. If that were really the case, The Last Action Hero (1993) would have been the franchise-founding hit of the year. There are prehistoric animals in the park (those vegisaurs cooed over by the kids) but the stars are the velociraptors and the big T-Rex. These not only show teeth and claws, but are given the full monster treatment in scenes where they stalk and slash human victims or lurch shockingly into frame with a nasty hiss that makes an audience jump. These tactics work whether the menace comes a Martian in War Of The Worlds (1953), a mad preacher in Night Of The Hunter (1955), or a werewolf in The Howling (1981). 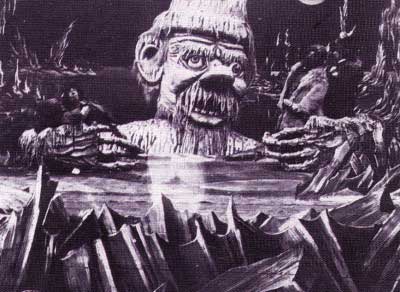 Motion pictures began as magic shows, and the monstrous was always somewhere on the bill. In the early days, a primitive special effects triumph such as the frost giant of Georges Méliès’ Conquest Of The Pole (1912) just had to rear-up on-screen to get a gasp, but audiences soon demanded more than filmed stage illusions. Hollywood technicians were envious of the huge dragon of Fritz Lang’s Siegfried (1924), and copied the trickery for the silent Thief Of Bagdad (1924), while Willis O’Brien, eventually the father of Kong, started tinkering with stop-motion animated dinosaurs for short films before signing-up to work on an adaptation of Sir Arthur Conan Doyle’s The Lost World (1926). O’Brien and his pupil Ray Harryhausen carried the torch for rubber-clad armature dinosaurs in the cinema until CGI came along to develop (or cheapen) the technique. A parallel evolution of man-in-suit or rubber-on-strings monster made for gigglesome Godzilla sequels and lesser Doctor Who serials until the eighties, when Alien (1979) and the remake of The Thing (1982) showed how effective that style of effects could be if sophisticated enough and lit properly. 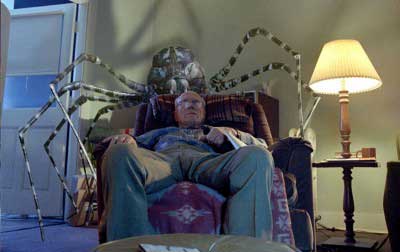 Just because a movie has a monster in it doesn’t make it a monster movie. Shelob in The Return Of The King (2003) is probably the best giant spider ever put on film, but she’s just part of the business. A proper monster movie, like Eight-Legged Freaks (2002), puts its monsters front and centre, preferably in the title, certainly on the poster and in the trailer. A-list stars rarely do monster movies because their agents know who’s going to get the reviews. Wonderful as Fay Wray, Bruce Cabot and Robert Armstrong are in King Kong (1933), they just aren’t Jean Harlow, Clark Gable and John Barrymore. And only the biggest stars can play monsters without being type-cast forever, like Tom Cruise as Lestat, or Spencer Tracy as Mister Hyde. We want stars (ego-fueled, unreasonable, colossal personalities) to act like monsters, not be upstaged by them. Hollywood wisdom has it that if you have a great monster, you don’t need a box-office name. Notice how the once-unknown Sigourney Weaver plays a more monstrous character over the course of the Alien series? When she became a star, she realised she needed to grab the title role. 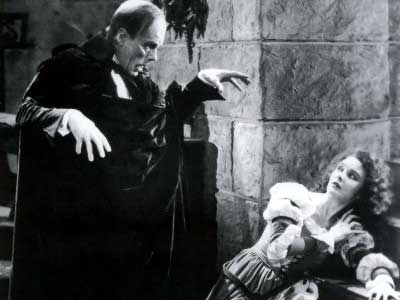 The more human monster came to prominence in the twenties, thanks to the ingenious make-up of Lon Chaney Senior. No subsequent Phantom Of The Opera (1925) has even tried to be as terrifying as Chaney’s triumphant, skull-faced madman. It’s not just that Chaney’s nose-less, bulging-eyed, rotten-toothed face is so scary, but that the scene of his unmasking is so startlingly directed. The camera is so shocked as the Phantom looms over the heroine that it goes out-of-focus while Chaney’s expressive hands and poses make him a deadly creature even when masked. And yet, as with Chaney’s Quasimodo and the animated puppet Kong, the Phantom has a heart, a humanity we can’t help but recognise. Chaney set a precedent for two separate strains of talkie terror, represented by the almost-human Dracula (1931) of Bela Lugosi, who chilled without fangs or scars by just radiating neon-eyed evil, and the make-up-swathed Frankenstein (1931) Monster of Boris Karloff or The Wolf Man (1941) of Lon Chaney Junior, who were sympathetic even under the flat head and all that yak hair. 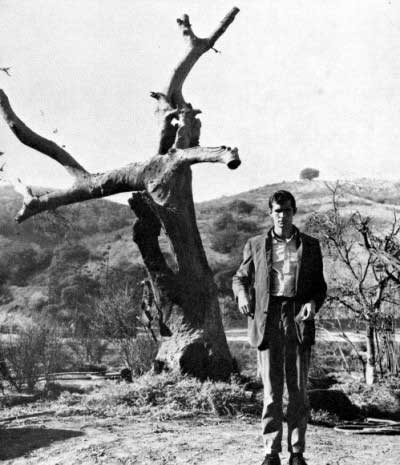 Of course, the great monsters are the ones we’re most afraid of, but the greatest are those we feel a horrible kinship with. Frankenstein, King Kong and Psycho are tragedies as well as horror films, because we can’t help but identify with their trapped, raging, doomed creatures. This is why quickies such as I Was A Teenage Werewolf (1957) and I Was A Teenage Frankenstein (1957) clicked with fifties tear-away audiences, and why even the most vicious monsters are loved by kids and teens alike. Generations of Goths with dyed hair have fantasised about joining Anne Rice’s cadre of beautiful, alienated. whining, self-pitying, frankly fascist vampires, and sulky Brad Pitt and pouting Tom Cruise did nothing to discourage the ambition. In Carrie (1976), Stephen King, Brian DePalma and Sissy Spacek create the monster who is every teenager, appalled by the changes their body is going through and feeling at odds with the entire world, granted the power to blow up the whole school and kill all the bullies. 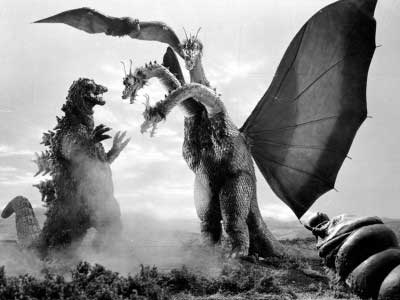 The idea of a monster as tragic hero has been undercut. King Kong evolved into E.T. The Extra-Terrestrial (1982), who looks monstrous but also cute, and is unjustly pursued by the grown-up authorities. Godzilla became a saviour of Japan and champion of the environment, while screens are over-run by nice-guy vampires who don’t drink human blood, or werewolves who are just misunderstood. This is all very well, but smacks of a kind of political correctness about imaginary beings, tantamount to making Westerns with Apache warriors who don’t torture captives or African-American ghetto gangsters who never deal drugs. Frankly, to be a proper monster, fangs or bug-eyes aren’t enough. E.T. is a rubber Gandhi and Blade (1998) is a vampire Uncle Tom. A real monster should not only be powerful and grotesque, but angry and unreasonable. 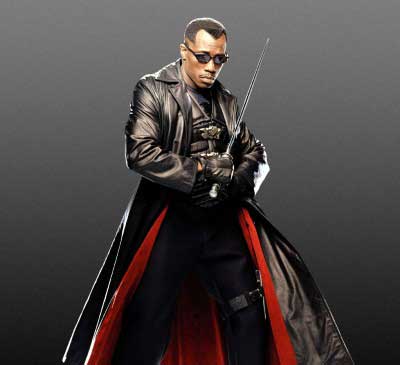 This urge to destroy, to cut through all the red tape and smash things up, has a lot to do with the popularity of monsters. Every commuter in a packed train or crowded lift imagines cutting loose with a chainsaw. In fact Tobe Hooper told me he came up with the idea for The Texas Chainsaw Massacre (1974) while caught in a crush of Christmas shoppers. On the large scale seen in King Kong, The Beast From 20,000 Fathoms (1953) or Godzilla, destruction fantasies are a modern phenomenon. Life has to be dominantly urban, fast and complicated for audiences to relish the prospect of cities being trashed by a radioactive lizard or alien invaders. And it is a fantasy. Real-life events such as Hiroshima, the Blitz or 9/11 don’t seem to take away an audience’s taste for imagining a reign of devastation upon the communities in which they live.

Of course, breaking things is the least subtle form of monstrousness. Creatures who express themselves in temper tantrums are most likely to be finished-off by simple mob violence: Blasted by biplanes buzzing the Empire State Building, torch-wielding mobs of Transylvanian peasants storming the mad scientist’s castle, massed mobilisation of the Japanese defense forces, etc. Some monsters need to be truly monstrous, cruel, sadistic and threatening, as insidiously seductive as the thirsty Dracula or the Mephistophelean Lecter, as perverse as child-molesting Freddy, or randomly as vengeful as Sadako. If monsters can express our inner desires, they also represent our fears. Different generations and different audiences are terrified by different things. One seventies Godzilla film includes a character whose job is inventing monsters to terrorise children, and he comes up with the Too Much Homework Monster and the Overly-Strict Mother Monster. 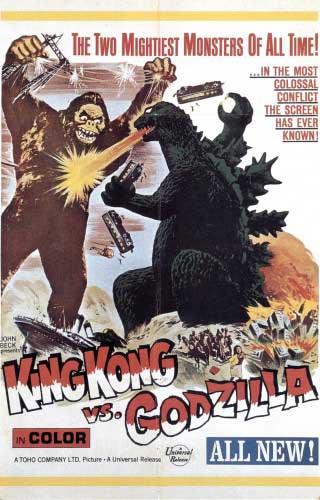 The age of dictators threw up diabolical masterminds with devoted followers, from Fu Manchu to the Daleks. The Cold War made for many invaders from Mars and emotionless hive-minds with no respect for individuality or the American way, from The Thing From Another World (1951) to Invasion Of The Body Snatchers (1956). Flesh-eating zombies tend to be most active when there’s a hawkish Republican in the White House. Liberals see zombies as the mindless, complacent, consumerist voters behind Nixon, Reagan or Bush, while conservatives imagine hungry, undisciplined, diseased hordes threatening to spill over America’s borders. Now we have Magneto’s Brotherhood Of Evil Mutants in the X-Men (2000) films, a monster terrorist faction. The way the world is going, we should expect a lot more like them. Anyway, please join me next week when I have the opportunity to inflict upon you the tortures of the damned from that dark, bottomless pit known as Hollywood for…Horror News! Toodles!