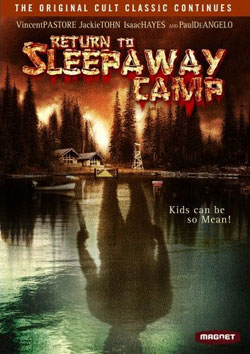 Many years have passed since Angela’s murderous rampage at camp Arawak (now renamed camp Manabe) and many seemed to have forgotten her altogether. The more things change, the more they stay the same it seems and a another young outcast is constantly ridiculed and humiliated by each and every person in the camp. When this torment reaches critical mass, counselors and campers alike begin turning up dead. Is it Camp Columbine, or something more sinister?

With Jason Voorhees securely floating around in the vacuum of deep space, you thought it was safe to go back and enjoy a nice summer of archery, waterfront activities and fornication. Sorry kids, but Jason wasn’t the only homicidal maniac stalking campers in the 80’s. Yep it’s another Sleepaway Camp. Returning to the helm and completely ignoring (from what I can tell) the 2 previous installments, is original writer/director Robert Hiltzik. Returning with him is counselor Ronnie, (Paul DeAngelo) and cousin Ricky (Jonathan Tiersten), along with new (and head scratching) additions Isaac “The Duke of New York” Hayes and Vincent “Big Pussy” Pastore. Mixed in around them are some semi-familiar faced counselors and a gaggle of variously talented and annoying children.

First of all, I’d like to say that I enjoy the Sleepaway Camp series. Particularly the original, which, while being pretty standard 80’s slash fare for 90% of it’s run time, produces perhaps the most disturbing and indelible images in all of horror history. The shot at this end of that movie scared the ever-loving sh*t out of me when I was a kid, and to this day, still has the same effect. It comes out of %$%*@ nowhere and literally rapes your eyes sockets.

It’s down right creepy like nothing else I’ve ever seen. I’d seriously have to dig around to find a series of shots and sounds that are as unsettling and nightmare inducing as the last minute of Sleepaway Camp – and for that, I will always love it and give it serious props. The sequels were both fun and satisfying in terms of gore factors. There’s some interesting kills scattered throughout both films and they were certainly campy fun for any 10 years old having sleepovers in the early 90’s. This however seems like too little too late. Fancying itself the “true sequel” to the original, it follows the same sort of mold, unlike the previous SCs which take the story in a more, I feel, natural direction.

The film mainly centers on Alan; a fat, perpetually dirty and forever irritating camper who is constantly the brunt of everyone’s aggression. He even has a catch phrase. “Your ass smells!” he proclaims to any in his path, and The Professor found this little touch equally appropriate and fun. Like Angela, no one really wants him around and they go out of their way to humiliate, torture, mock and deride this poor son of a bitch at every turn. At first he seems like an asshole, because he is. Then you almost begin to feel bad for this kid, because of all the sh*t he gets. But, as in life, these things just make him more of an asshole, which makes everyone hate and pick on him further, so it’s hard to ultimately sympathize with the kid.

All this goes on for a seemingly open ended amount of time before people start getting knocked off. For the most part this movie feels like you’re watching a really long episode of “Salute Your Shorts” and you’ll wonder where the %$%*@ all the horror went. It comes and goes at various points, never really delivering the goods. Some of the kills are mildly interesting (the bucket of syrup Counselor Randy finds himself in is sort of entertaining) but on the whole they’re written and shot with the kind of mediocrity you’d expect out of Hilzik in the mid 80’s.

The Professor’s not sure if that’s good or bad – meaning I can’t tell its is kitschy and hat-tipping or whether it’s a case of plain old fashion lack of growth. Either way, it doesn’t amount to a whole lot of you enjoying the result. It never feels like a throw back, and it never goes balls out enough to meet today’s standard. So what is it? Hell if I know. I honestly couldn’t tell at times if this film was being presented in a tongue-in-cheek manner or if I was suppose to be taking any of it seriously. By the end I pretty much figured it was a joke, but they never come correct enough with that to make it enjoyable. If it was suppose to be a joke, than it needed to be funnier. If it wasn’t a joke, than it needed to be more horrific.

The film simply tries too hard and spends way too much time attempting to convince the audience that Alan could be responsible for the murders, while inversely not trying hard enough to disguise who the real killer is. Seriously, if you don’t have this figured out within the first 10 minutes – and to it’s full extent – then you need to have your eyes gouged out, because you have no intention of ever using them properly.

Acting wise, DeAngelo appears like a roided out puppet moved via cable controls by Mikey Rots. For The Professor, he invoked some serious unintentional (or intentional, again, couldn’t tell) laughs and I certainly never shuddered to see him on screen. Pastore pulls his weight as the camp director but he does seem a bit out of place. Hayes is barely on screen, as is the returning Tiersten, who literally serves no purpose except to say you have another actor for the original film reappearing. The rest of the cast is there, doing what b-movie actors do best – not making you take notice of them either way. The kids are alternately chuckle inducing and painfully annoying – particularly the girls when discussing the latter. None of them give what I’d call bad performances and it’s quite refreshing to see kids being played be actual kids. No five o’clock shadow sporting 12 year olds in sight! That being said, some of these kids are pretty effective, they look and sound as stupid as children and they’re just as obnoxious, which works for the movie. Alan, in all his frustrating dumbass-ness, at times portrays some genuine torment and wide-eyed, childlike naivety. I believed this kid was an idiot. He might actually be one, but I’m leaning more towards he just played his part properly.

One serious abomination though, is the score. It’s not that it’s bad, it just ever present loud as hell and at times seriously distracting. It’s another case of “is it a joke?” with this music. And again, if it’s a joke, it needed to be sillier, more inappropriate music. If it’s a serious score, why the hell is it so loud and not more creepy and ambient? 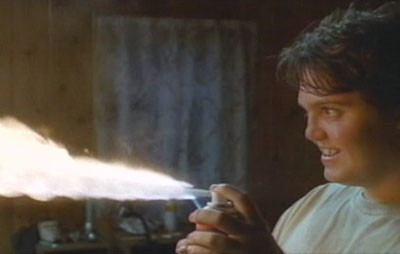 All in all, I’d like to suggest this flick. I’d like to say “spend 4 or 5 dollars and enjoy some fun horror” but I really just can’t do that. It has some moments where you might feel like it was worth it, but chances are, you won’t ever feel that way. Particularly when the movie abruptly and with no real consideration for the plot or the main characters comes to a shrieking halt and rolls credits. If this was an attempt to end the film similarly to the original, job not well done in the slightest. Nothing is really resolved and it almost seems like the filmmakers said, “well, who gives a %$%*@ about them anyway.” Well, if that was the attitude, why did you waste so much time developing them? Why did you even bother pretending for a moment this was a real horror movie? Why not just go balls to the wall crazy with it, make it way more ridiculous and THEN end it that way, so I truly don’t give a sh*t about anyone involved? I mean I didn’t care about them regardless, but it felt like I got shortchanged a bit. It felt like there was more story to tell there. At least kill these characters off for a minute or two so only the killer remains.

In conclusion, those of you whom, like The Professor, can’t simply walk past this DVD and not rent it, you’re going to do just that and my complaints aren’t going to stop you. However, if you’re on the fence and don’t want to shell out hard earned money, give it a pass. If you’ve never seen any of the Sleepaway Camps, go straight to the source and get the original – you’ll be a lot more satisfied. But hurry, before they get around to remaking that one too.

Money Shot: It’s a toss up between a broom handle to the eye socket, then into the wall and out the back of the a young camper’s head – and the bunk-bed iron maiden that sandwiches the fat, black girl. Both solid kills.