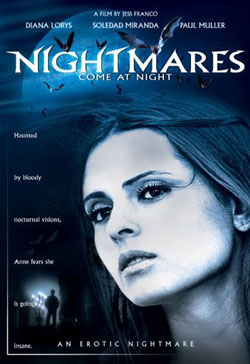 Diana Lorys, Collette Jack and Soledad Miranda star in this sexy thriller about two alluring dancers, Cincia and Anne, who embark on an erotically charged partnership. But when Anne starts to have nightmares that feature her as a murderous killer, she begins to lose her grip on reality. Or is reality merely rearing its ugly head in her dreams? She’s determined find out what’s causing this turmoil before something deadly happens.

“Les cauchemars naissent la nuit” is yet another one of Jess Franco’s least known and even lesser rated movies and for good reason too. It’s awful! I couldn’t make head nor tail of what was supposed to be going on and could barely stay awake throughout the whole pointless experience.

Supposedly this was a “lost” movie that was only rediscovered recently and hacked back together again. In my opinion, it should have stayed lost as there is very little entertainment to be had from it at all. It certainly hasn’t been restored much as the quality was terrible and the dubbing even worse.

I watched the “Hardgore” Region 2 DVD version but I’m told that there is another original French language version with subtitles also available. I really don’t think it would make a lot of difference though because the movie would drag in any language and probably still look as if the camera lens was covered in vaseline.

It was all just too slow and too uninvolving. I can easily admit that the three women in the film are gorgeous as, it seems, is Jess (or Jesus) Franco’s trademark but HorrorNews.net‘s Dai is much better looking than all of them put together. Yeah, that would be a three-headed, twelve-limbed monster of course if you really want to get pedantic. You know what I mean. They are all ok to look at in small doses but the nudity just becomes samey after a while even though when you first see Diana Lorys (who plays Anna) you can’t help yourself from just wanting to look and look.

I didn’t really like the blonde Colette Giacobine all that much either on an acting level or nude. I can’t exactly put my finger on it (well, not on what you are thinking I want to finger anyway) but she wasn’t right for the part of a character who supposedly has a kind of hypnotic control over others. She’s not bad to look at at all but she’s just sort of awkward and amateur somehow compared to Diana Lorys. This may be more evident in the French language version but even with dubbing you can how the two don’t exactly gel or have any chemistry between them.

The third girl who a lot is made of on the DVD extras and the sleeve itself is Soledad Miranda (as Susan Korda according to the credits). She was also Lucy Westenra in Jess Franco’s Spanish version of “Count Dracula” starring Christopher Lee. I wouldn’t say that she’s wasted in her two or three minutes of onscreen time here but what seems like a subplot (until the end when everything is revealed) could just as easily be cut out and nobody would even notice. The only reason it even exists is to finally show a heterosexual sex scene which gets interrupted in the worst way possible and to give both Soledad Miranda and Jack Taylor (as her boyfriend) a couple of cameos. Neither of them even get given character names.

The trouble with the nudity and eroticism in “Nightmares Come at Night” (the UK title) is that it doesn’t have any real climax to it. There’s a lesbian love scene with a lot of out of focus fades in and out which is beyond annoying and several other even more fake sex scenes later but none of them really make you want to bash one out while viewing. Even for 70s exploitation cinema this is all very poor.

Perhaps the only saving grace of the whole movie is Paul Muller’s role as some kind of doctor. I’m not sure if he is supposed to be a psychiatrist or just a G.P. but either way he is a lot more to do with the plot than you’d first imagine. From his first moments on screen where he is tormenting birds in a cage, you just know that Dr Paul Lucas isn’t all he seems and the performance is one of the better ones since everyone else is so wooden.

“Nightmares Come at Night” is a badly-paced and confusing mess at best. At its worst, it’s a dull as ditchwater 70s hack job with T & A all over it. There’s some fake blood at the start, very little on screen violence afterwards and nothing very horrific or scary about any of it. It’s more of a thriller than a horror film and so even including it on the “Hard Gore” label is very deceptive and misleading. There’s nothing in this to give you “Nightmares” apart from the thought of ever watching another Jess Franco movie again.