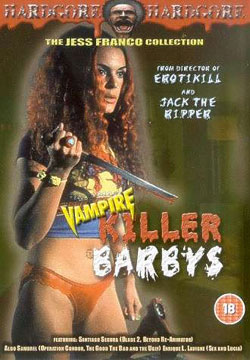 Director Jess Franco is back to his old tricks with this gruesome gore-fest about a band called The Killer Barbies (played by the band of the same name) that gets stuck in a remote locale when their transportation breaks down. Eager to get back on the road, the group searches on foot for help. Instead, they run into a bloodthirsty sorceress, Von Fledermaus (Mariangela Giordano), who’s about to make their lives much worse.

Yes, that is the correct spelling of the title even though the band featured in the movie is named “Killer Barbies” just like the famous dolls. Being English, I have the UK version of this movie which I bought from Poundland (a lot like Dollar Tree) a couple of years ago for the princely sum of, yes, you’ve guessed it – £1. It’s just known as “Killer Barbys” everywhere else for obvious reasons.

Now, knowing my taste in movies as you may or may not yet do, you’d expect me to absolutely hate this lesser valued Jess Franco effort with a passion usually only spent vilifying Hollywood remakes. But you’d be wrong. I thoroughly enjoyed it!

Perhaps the main reason I liked it was because of all the boobs and blood. Yeah, baby, I like those. I also liked it because it reminded me of yet another “bad movie” from 1985 called “Der Formel Eins Film” (“Feel the Motion”). How can that be when “Killer Barbys” is a vampire horror movie and “Feel the Motion” is just a load of Europop bands performing amidst a weak storyline? Well, the truth is, “Killer Barbys” is just a vehicle for promoting the Spanish rock band of the title amidst a weak and cheesy storyline too.

Now, using an unknown (to the rest of the world) mid-90s rock band who all travel in the same van and have sex with each other as the focus of a movie may seem like wishful thinking on the part of “Scooby Doo” lovers everywhere. Well, it certainly was for me. But more than that, even in spite of poor dubbing and dialogue, I really liked the characters. We’re not talking about something of quality like “The Monkees”, “The Beatles” or even “Cliff Richard” with this little adventure though as none of them could act their way out of a wet paper bag. I could however see a great parody of “Summer Holiday” here as, in many ways, it was just as if Cliff and the gang somehow took a very wrong turn and ended up in Transylvania.

The Killer Barbies unfortunately do not actually end up in Transylvania either. They are very much in Spain all the way through but it’s always nice to see a bit of Europe that you haven’t seen before. The camerawork is generally pretty good and things don’t look too low budget even though they obviously were. It’s really only some of the poorer practical effects that let it down but there’s nothing too noticeable apart from a couple of really fake bodies and heads.

Which brings me back to the nudity. Heads? Nudity? You will see my reasoning when you learn that the vampire Countess who the band encounters when their van breaks down exists on a diet of blood and semen. Oh yes and there’s an oral sex scene too just before to make sure I complete the segue.

Mariangela Giordano plays the Countess with a great deal of sexual allure considering that she is the least attractive of the three female leads and is actually 59 years old! Seeing her naked isn’t actually the horror you might expect from a woman her age which has me feeling a bit ill for some reason. Silvia Superstar who plays the lead singer Flavia also spends a bit of time nude and is one of the better looking women I’ve seen in any Spanish movie so I’m sure she’d be rated as the most attractive by a lot of viewers. The one who did it for me though was Angie Barea. She plays the overly horny blonde backup singer and is hot as hell! Trivia fans will love that she used to host a sex programme on Spanish TV too. Obviously she was typecast.

There’s very little for straight females to enjoy here unless they like seeing a hairy willy in a bath. Now there was horror for me as I certainly didn’t expect to see one of those half way through the film! I wouldn’t say all the males in the film are ugly or anything but they are quite plain in comparison to the women. There are even a couple of dwarves in it but they don’t do much at all really which is a shame.

The big question is should this even count as a horror movie. Hell yeah! I even got into the story though it’s certainly nothing original. Is it scary? Hell no! It’s not scary at all unless women of nearly pension age rubbing blood all over themselves is a phobia of yours. Actually it might be one of mine now even though it turned me on!

If you are feeling a bit down and there’s nothing else to watch then I can thoroughly recommend “Vampire Killer Barbys”. It’s worth the conversion rate of $1.50 of anybody’s money but if you can’t find it to buy then I suggest a rental. As “bad movies” go, it isn’t actually that bad at all.