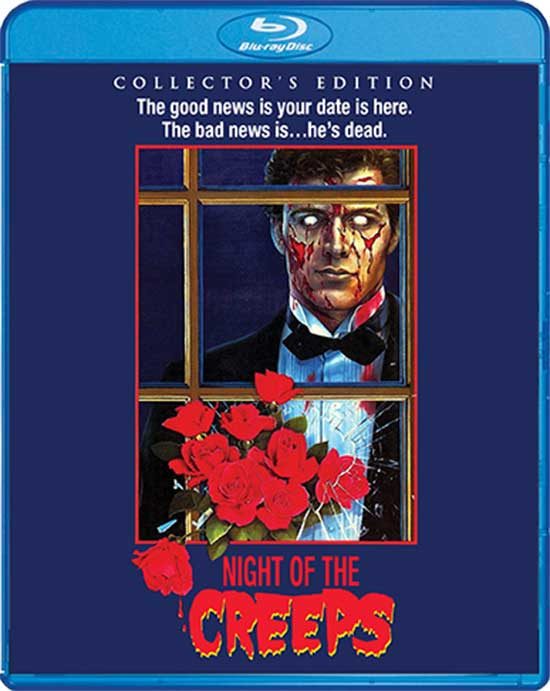 When two fraternity brothers thaw out a corpse from their school clinic, evil slugs from outer space that had been frozen inside the body race across campus, infecting lusty coeds and turning them into flesh-hungry zombies. Now it’s up to a chain-smoking former cop (Tom Atkins) to save the whole town from the alien menace. Fred Dekker directs this gleefully campy cult classic that co-stars Jason Lively and Jill Whitlow.

“Night of the Creeps” is a bona fide cult classic! It’s a shame that it has taken so long for this film to make its way to DVD and Blu-Ray but it is finally here and the discs are loaded. Fred Dekker has had a long career but it was “Creeps” and the excellent “Monster Squad” that have had fans entranced for such a long period of time. The film features one of my favorite character actors, the great Tom Atkins, and boasts some terrific effects work from Miller, Kurtzman, and Berger. I still remember watching this film for the first time while lying on the floor in my bedroom, peeking out the crack in my door while my dad was kicking it in his recliner. It was hard for me to hold back on my laughter but I made it through and have loved this film ever since. 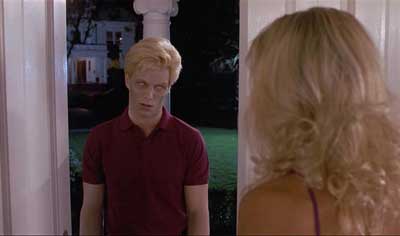 In the 50’s, a canister from space crashes to Earth that unleashes a nasty leech creature that attacks a local teen. Three decades later, Chris (Jason Lively) and J.C. (Steve Marshall) decide they are going to pledge a fraternity and to help get them in, they steal the body from a cryogenics lab. With hopes of winning over the gorgeous Cynthia (Jill Whitlow), everything goes crazy when the parasite frozen within the body breaks free and spreads, creating a horde of zombies. With the help of Det. Ray Cameron (Tom Atkins), the group has to stop the spread of the parasites and save each other. It doesn’t get much simpler than that but its execution is shear perfection. 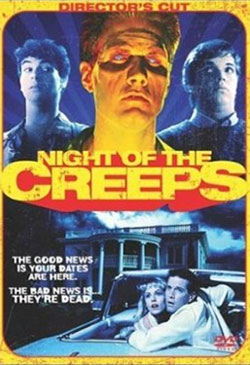 This film was done in the heyday of makeup effects and this film boasts some incredible work from a pre-KNB Howard Berger and Robert Kurtzman along with David Miller that will always work on such a stronger level than CGI that will never be replaced. The effects were simple and messy, using such great techniques’ as animatronics, stop-motion, and prosthetics. 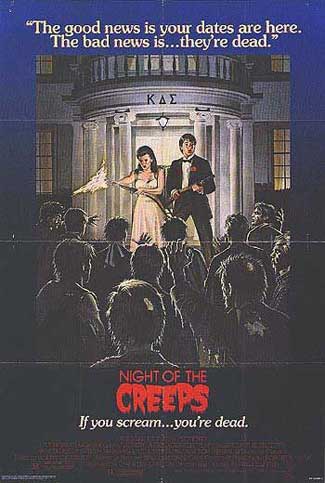 Fred Dekker was the leader in a genre of horror that didn’t take off till at least a decade later. Self-referential horror films are all the craze these days but when the film was released in 1986, it was relatively unheard of. Maybe that is why the film wasn’t a financial success, hopefully the DVD release allows a younger generation to see just how fun and smart the film is.

There is a chemistry between our main trio of characters that is unheard of in these types of films. From the moment they come together you get the sense that these are friends or that they have crushes on each other. It’s all believable, even in the midst of slug infested zombies attacking their friends and frat boys and girls, it feels right. Fred Dekker infused elements from classic science fiction and horror films and just mixed it together. It’s almost like a greatest hits of Saturday afternoon science fiction theater with heart and Tom Atkins. Yes….Tom Atkins. Det. Cameron is an iconic character in the vein of Ash Williams or Snake Plissken. He is a tough as nails noir-ish detective, haunted by his past, with a wise crack for everything. He is on a journey for redemption and Tom really chewed into his character. He is Det. Cameron, and will always be remembered by genre fans for him. I have no idea how many times I have answered the phone with the phrase, “Thrill me!!”. 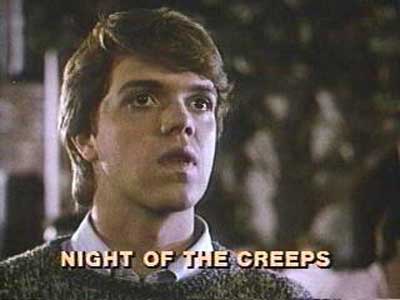 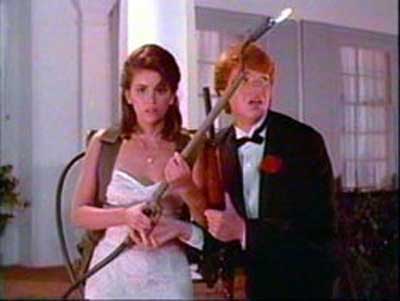 It really doesn’t matter how many times you have seen the film, just that you have, at least once. I have bootlegs from conventions with the alternate ending but now it is time to toss them away. There is well over an hour of bonus features that covers every aspect of the films evolution, as well as a mini-doc on Tom Atkins. There are commentaries from the cast as well as Fred Dekker himself. Old fans and new fans alike need to buy this DVD.

Show it to your friends who have never seen it before or have a Creeps gathering at your house. This is a horror film with genuine thrills, with laughs, and a bit of emotion thrown just to make sure you know how great this film is.