A group of college friends decide to spend their spring break relaxing, getting drunk, and having sex at their rich friend’s mansion that is located on an island. Unfortunately though, there is a mysterious killer on the island as well who is stalking the group and picking them off one-by-one in a series of gruesome ways. Is the killer a total stranger or is it someone that the group knows, and will any of them make it off the island alive to ever have the chance to celebrate spring break (and April Fool’s Day) again?

I saw this movie when I was in the 7th grade when it came out on VHS (yes, I am showing my age here) and thought that it pretty much ruled. I didn’t see it again for years until one day when my girlfriend at the time and I skipped school and hang out at her parents’ house all day eating biscuits and chocolate gravy (sounds nasty, right? Trust me, it is awesome! ) while we watched old slasher flicks. April Fool’s Day was one of the many movies that we watched (along with Girl School Screamers, which was one of my girlfriend’s favorites of all time) that day, and it held up very well. Upon watching it again recently I am happy to report that it still stands the test of time and is one of my favorite slashers from the 1980’s. 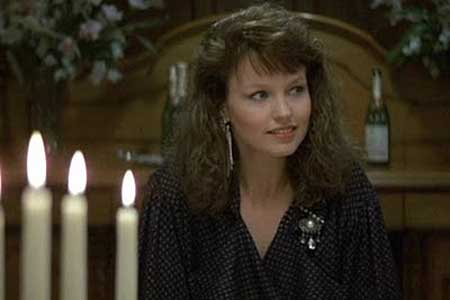 I think that one of the reasons that the movie is so good is that it doesn’t take itself too seriously. Don’t get me wrong, it isn’t a comedy by any means and there are some violent things going on here, but there is some light humor that takes place throughout the movie that really works. The script is witty and well-written, and as a result the dialogue between the characters is top-notch (and pretty damn funny at times). The tone of the movie is pretty light-hearted for a slasher flick, and I think that if Kevin Williamson wasn’t such a talentless prick that the Scream movies would have had the same feel (instead of being so damn arrogant and condescending toward the slasher genre). 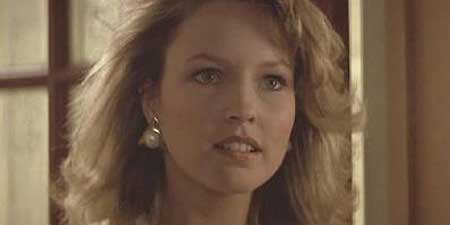 April Fool’s Day has a lot going for it that will appeal to most horror fans including a classic slasher premise (people trapped somewhere they can’t escape while a killer is knocking everyone off, several clever twists and turns that most viewers won’t see coming, and an amazing cast led by the awesome Amy Steel (who is no stranger to the genre as she faced Jason-and survived- in Friday the 13th Part 2). As a matter of fact I think that one of the film’s biggest strengths is due to the fact that the cast does such a great job. 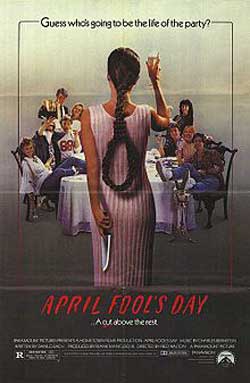 They all have great chemistry with each other and they work so well together that it seems like they all really are college buddies and not just acting. A lot of so-called critics bitch and moan that characters in horror films are usually two dimensional and not very realistic, but if they took the time to watch this film then I think that they would reconsider this unfair opinion. These characters are realistic and likable, and I for one didn’t have a problem with a single one of them (which is saying something as there is always at least one character in every movie that I find annoying and can’t wait to see them die horribly). 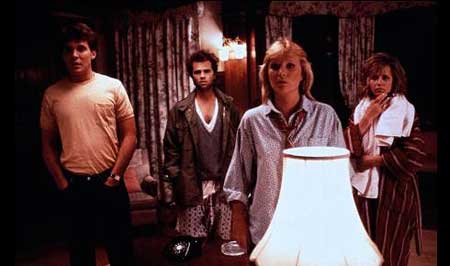 At the risk of spoiling everything, I feel like I have to say something about the ending. I know a lot of people who hate it and think that it is a slap in the face, but despite the fact that the big reveal at the end is almost too much like a Scooby-Doo cartoon I still like it. I know a lot of people who think that the ending ruins the entire movie but I have to disagree. I think that what takes place at the end is pretty much genius and I applaud the filmmakers for having the balls to do something a little different. While some people may argue otherwise I think that it works, though I will admit that there should have been at least one more major twist at the end (as was in the original script) just to make everybody happy. 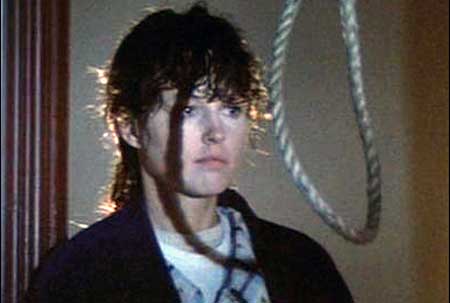 I personally love April Fool’s Day. I know that it isn’t for everyone and that a lot of people absolutely despise the ending, but I for one dig everything about the film. I think that if most people gave it a chance they would be into it as much as I am as well. I think that this year on April Fool’s Day that my wife and I are going to watch this film and the excellent Slaughter High (as its alternate title is April Fool’s Day as well) to celebrate the day. If you are a fan of 80’s slasher flicks, or horror films in general, then you will love this movie.