A Brief History Of Hammer

One of the most successful and prolific British production companies, Hammer Films has become synonymous with horror – most notably the unforgettable series of Dracula and Frankenstein films which were instrumental in launching the careers of my dear old friends Peter Cushing and Christopher Lee. Elevating the horror film in much the same fashion as the illustrious Ealing Studios did for comedy, the Hammer Horror was overall quintessentially British, frequently stylish, often sophisticated and characterised by a quaintly antiquated aesthetic. Despite being continually staked or reduced to ash, Chris Lee’s tenacious Count would return from the grave time and again, the perfect mascot for a studio whose prodigious output has guaranteed its own immortality.

Founded November 1934, Hammer Films released several minor features before the advent of World War Two ceased production. Returning to movie-making in 1947, Hammer’s output consisted largely of modest B-grade pictures (crime thrillers and comedies, often adapted from successful stage or radio plays) but it was yet to find international success. With major stars beyond Hammer’s admittedly limited resources, a new audience hook was required, resulting in Hammer’s first foray into horror and the company’s first major success. Based on Nigel Kneale’s popular television serial, The Quatermass Xperiment (1955) struck a chord with audiences and led the enterprising studio to conclude there might be a quid to be made with this monster lark. 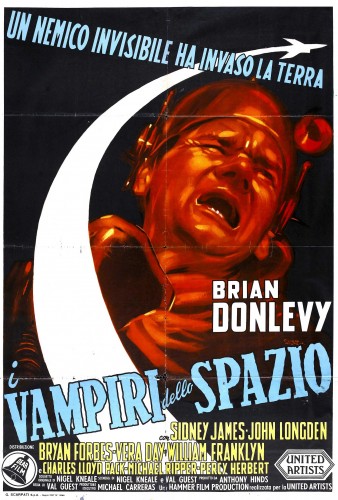 Following Quatermass II (1957) and The Abominable Snowman (1957) also scripted by Kneale, Hammer would plunge headfirst into the genre, resurrecting one of horror cinema’s most enduring icons for their seminal period shocker The Curse Of Frankenstein (1957). Starring Peter Cushing as Baron Victor Frankenstein and a then-unknown Chris Lee as his monstrous creation, The Curse Of Frankenstein was an instant hit that made Hammer, Chris and Pete into household names.

Seeking to duplicate the success of their Frankenstein venture, the studio turned its attention to Transylvania’s most famous Count. Armed with the same cast and crew that had breathed new life into Mary Shelley’s creation, Hammer unleashed Dracula aka Horror Of Dracula (1958) to equally successful box office returns with Chris leaving his charismatic imprint on the title role while Pete played dogged nemesis Van Helsing, member of a family whose men all seem to be born at the age of seventy. Boasting the added bonus of colour and spiced with some sexual frisson, Hammer’s version was a much more shocking proposition for fifties audiences than the Universal original starring Bela Lugosi, and remains one of their finest productions. 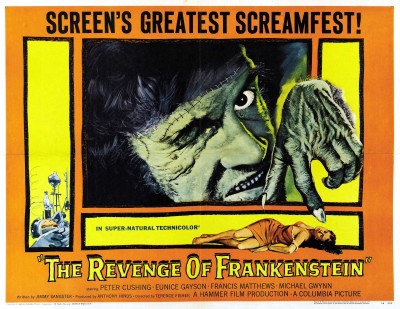 The Revenge Of Frankenstein (1958) followed with Pete continuing his ungodly experiments, but by this time the major Hollywood players were wising-up to Hammer’s ability to deliver economical but profitable horror features and offered their own properties for potential remakes. The following year Universal’s The Mummy (1959) was reborn in glorious colour with Chris Lee as the shambling Egyptian whose tomb is plundered by Pete. A stylish and atmospheric re-imagining, The Mummy was quickly followed by the Lee-free but moody The Brides Of Dracula (1960) with Pete’s vampire hunter taking on the sadistic Baron Meinster (David Peel) and his bevy of bloodsucking brides. 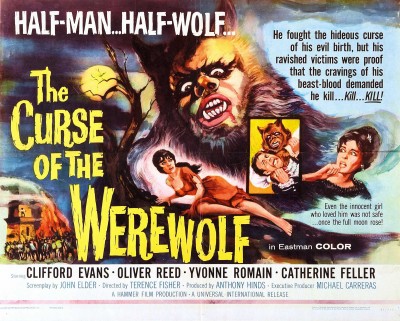 Having found a lucrative niche in capitalising on existing horror legends, Hammer turned its attention to the next obvious choice, lycanthropy, as popularised by Universal’s classic The Wolf Man (1941). The Curse Of The Werewolf (1961) found hard-drinking wild-man Oliver Reed barking at the full moon in an effective chiller partially based upon the novel Werewolf Of Paris. The Phantom Of The Opera (1962) was also given a figurative face-lift with Herbert Lom in the role made famous by both Lon Chaney Senior and Claude Rains for Universal.

The Evil Of Frankenstein (1964) reunited Pete’s mad Baron with an earlier creation, while Dracula Prince Of Darkness (1966), a direct sequel to Hammer’s original Dracula, resurrected Chris, alongside Australian actor Charles ‘Bud’ Tingwell, no less! Hammer’s horror breakthrough also saw them predate George Romero’s Night Of The Living Dead with Plague Of The Zombies (1966), whose sets were then thriftily recycled for their subsequent chiller The Reptile (1966) starring Blake’s Seven villainess Jacqueline Pearce as a fanged femme fatale. 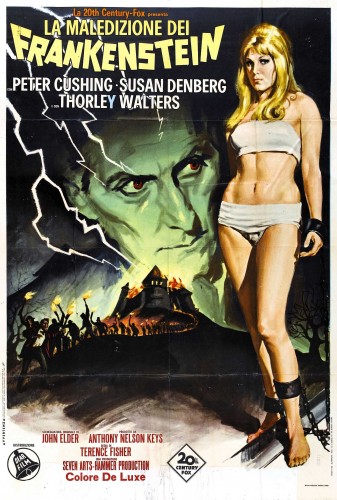 The irresistibly titled Frankenstein Created Woman (1967) headlined a double-bill with The Mummy’s Shroud (1967) before Hammer returned to its genre grassroots with the third Quatermass installment, Quatermass And The Pit aka Five Million Years To Earth (1968), which would itself significantly influence a plethora of subsequent genre films, from 2001: A Space Odyssey (1968) to Reign Of Fire (2002), and thanks to the popularity of bestselling author Dennis Wheatley’s devilish tales, Hammer would also segue into Satanism and the occult with The Devil Rides Out (1968). As the sixties drew to a close, Hammer hit a prolific peak and went into vampire overdrive, beginning with their third Dracula outing Dracula Has Risen From The Grave (1968) with cinematographer Freddie Francis filling the shoes vacated by long-time director Terence Fisher, accentuating the Count’s menace with the inventive use of filter effects. 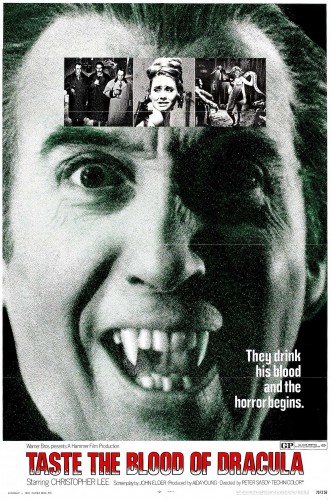 Taste The Blood Of Dracula (1970) took the series into the seventies, where Hammer’s first (and only) collaboration with leading horror house American International resulted in The Vampire Lovers (1970). Based on Sheridan Le Fanu’s provocative literary classic Carmilla, The Vampire Lovers successfully married themes of blood and lesbian eroticism that have since become an indispensable ingredient of any self-respecting vampire flick. Lesbian vampires would return in Jimmy Sangster’s full-blooded shocker Lust For A Vampire (1970), but not before Hammer stalwarts Dracula and Frankenstein were reunited for a double-bill – The Scars Of Dracula (1970) and Horror Of Frankenstein (1970) – the latter notable for casting future Darth Vader David Prowse as the monster.

Based on the historical exploits of Countess Elizabeth Bathory (who bathed in the blood of virgins to keep her young and beautiful), the evocatively titled Countess Dracula (1971) failed to deliver despite the presence of Hammer hottie Ingrid Pitt. However, Twins Of Evil (1971) quickly returned to the popular swell of breasts and blood with twin Playboy playmates pursued by a posse of witch-hunting Puritans led by Pete Cushing. 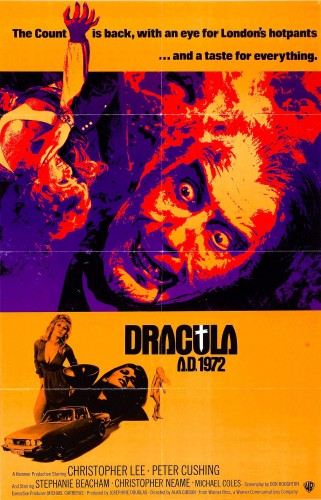 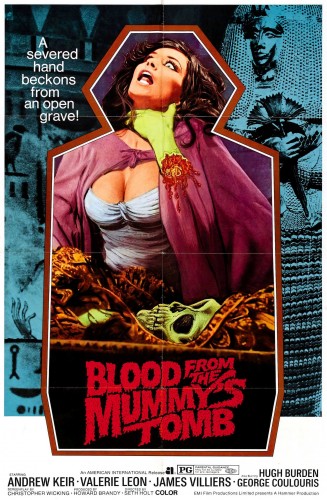 Despite the glut of vampirism in the early seventies, Hammer hadn’t abandoned their Frankenstein and Mummy properties entirely, breathing musty new life into these genre stalwarts with the all-new Blood From The Mummy’s Tomb (1971) – based on Bram Stoker’s novel Jewel Of The Seven Stars remade as The Awakening (1980) starring Charlton Heston – and Frankenstein And The Monster From Hell (1973). By bringing an audacious transgender twist to Robert Louis Stevenson’s classic in Doctor Jekyll And Sister Hyde (1972), and invoking Whitechapel’s infamous slayer in Hands Of The Ripper (1971), a further pair of nefarious nasties were added to the growing Hammer pantheon. 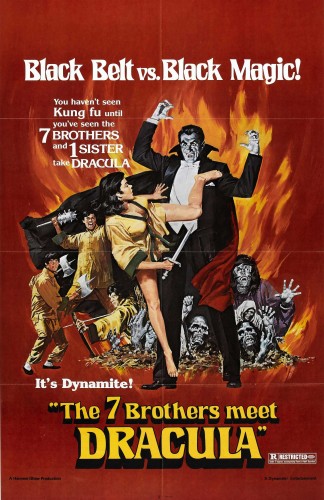 Following a decade of vampires and monsters, audiences were soon lured elsewhere as the kung-fu cycle ushered in by Bruce Lee began competing for the almighty box office dollar, so Hammer hit back with the most logical solution. In partnership with Hong Kong chop-socky moguls the Shaw brothers, the studio unleashed The Legend Of The Seven Golden Vampires aka The Seven Brothers And One Sister Meet Dracula (1974), a bizarre martial arts-horror hybrid that sent Pete’s Van Helsing to Nineteenth Century China to destroy the Count amidst much kung-fu fighting. Well, it looked good on paper, but as the sun rose on Dracula so it would also set on Hammer, but not before a final foray into the macabre. Adapting another Dennis Wheatley occult story, To The Devil A Daughter (1976), Hammer Film’s final gift would be to introduce the world to a naked Nastassja Kinski.

In the early eighties Hammer Films created a series for British television, Hammer House Of Horror, which ran for thirteen episodes. In a break from their cinema format, these featured plot twists, which usually saw the protagonists fall into the hands of that episode’s horror. These varied from sadistic shopkeepers with hidden pasts, to witches and Satanic rites. The series was marked by a sense of dark irony, its haunting title music, and the intermingling of horror with the commonplace. A second television series, Hammer House Of Mystery And Suspense, was produced in 1984 and also ran for thirteen episodes. The stories were originally to have been the same one-hour length as their previous series, but it was decided to expand them to feature-length so as to market them as ‘movies of the week’ in the US. This series was Hammer’s final production of the Twentieth Century, and the studio went into semi-permanent hiatus.

The company eventually ceased production in the mid-1980s and since then has remained in effective hibernation. But in 2000 the studio announced plans to begin making films again after it was bought by a consortium including advertising executive Charles Saatchi, but no films were produced. In May 2007, the company behind the movies was sold again, this time to a group headed by, the Dutch consortium Cyrte Investments, who announced plans to spend some US$50m (£25m) on new horror films. Beyond The Rave (2008) was a vampire story set in London’s underground rave scene, released direct-to-DVD, and this year promises Let Me In (2010), a remake of a recent Swedish horror film titled Let The Right One In (2008), and The Resident (2010) starring none other than Chris Lee himself, which pretty much brings the Hammer Horror story full circle.

Please join me next week when I have the opportunity to present you with more unthinkable realities and unbelievable factoids of the darkest days of cinema, exposing the most daring shriek-and-shudder shock sensations to ever be found in the steaming cesspit known as…Horror News! Toodles!