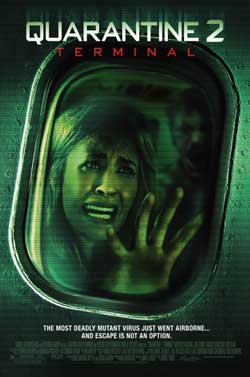 A plane is taken over by a mysterious virus. When the plane lands it is placed under quarantine. Now a group of survivors must band together to survive the quarantine.

With the arrival of Quarantine 2, you might be expecting a reboot to [REC] 2, in a similar fashion as the first Quarantine. To bring everything up to speed, [REC] was a successful verite shot foreign film that really made an impact in the horror world. So much that a US version was constructed almost shot for shot to deliver the same treatment spoken in English. This film was called “Quarantine”. The story originated with a viral outbreak in an apartment complex that spread and caused the infected to become raving zombie-like savages that continued the spread thru biting. Then came [REC] 2, in which the story continued at the same building but this time included shots of what was going on outside during the commotion. The theme was altered to introduce a whole religious aspect that gave the series a whole new perspective. Well I can say I really liked [REC] 2 and the bold move to change things a bit.

This brings us up to Quarantine 2: Terminal which pretty much decided to go in its own direction leaving behind any religious affiliation and keeping with the viral savages approach. Though, absent is both the apartment and the verite style from the first. We take the virus into a new setting….the setting of an airplane. I was actually glad they left behind the verite shooting as that would have really exhausted the approach. This is an actual film and for that matter a bit more like the “Flight of the living dead”.

Now for timeline purposes, we find that the apartment virus is still underway per the news broadcasts, though the passengers haven’t heard much. A normal flight is assumed and 2 young stewardesses are trying to cope with the humdrum world of being flight attendants. The passengers range from nice to annoying with a list that includes a young boy, a business man, a obnoxious drunk, a hamster lover, a couple in love and a few other older folks for the ride. All is fine, though until the obnoxious drunk grows ill and vomits on the stewardess.

Well from here on out as you can guess this illness is a result of an infection that begins the whole savage-human trend aboard the flight. They manage to land but find themselves quarantined almost immediately after. This changes the setting to the underbelly of a terminal with the survivors trying to figure out what all the fuss is about. It’s soon pretty clear with the infected becoming rabid mindless zombies that things are not looking good. All survivors fight to stay alone, fight for answers and discover a few surprises about the story along the way.

I thought the rabid humans provided a decent scare, of which would have had more impact in a theater setting than me watching at home. The film ends up being a pretty good addition to the franchise and doesn’t take its last route of carbon copying it’s sequel. With our genre in a zombie fascination, this film will hit a few marks that work for lovers of these style films. The FX are pretty good and bloody enough to be horrifying. Some viewers might find fault with the sort of formula-driven storyline which is to be expected with several films of this nature. So the argument might be that the film has lost its affinity with the series…maybe so, but I liked it, none the less.

Though even with that, it moved enough to be enjoyable and provided plenty of rabid beast scenes that didn’t slow the pace.

The film is directed by John Pogue who had a good run with the “Skulls” movies and “Ghost Ship”. Bre Blair takes the lead role as Paula, with Josh Cooke being the caring passenger Henry. George Back may have a short lived role, but ends up being the most aggressive rabid of the bunch with his role as Ralph. Overall, this is a great thriller that adds a nice addition to the REC and Quarantine franchise.