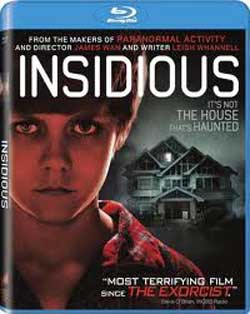 Described as the “the scariest horror film since Poltergeist” (Jason Bene, KillerFilm.com), the hair-raising horror film Insidious debuts on Blu-ray™ and DVD July 12th from Sony Pictures Home Entertainment. Patrick Wilson (Lakeview Terrace, The A Team, Little Children), Rose Byrne (Bridesmaids, upcoming: X-Men: First Class) and Barbara Hershey (Black Swan) star in the frightening story of a family looking to prevent evil spirits from trapping their comatose child in a mysterious realm called “The Further.” Bonus materials include three behind-the-scenes featurettes: “Horror 101: The Exclusive Seminar,” “On Set with Insidious,” and “Insidious Entities.” Insidious will be available on Blu-ray for $35.99 SRP and on DVD for $30.99 SRP.

From the makers of Paranormal Activity and Director James Wan and Writer Leigh Whannell, Insidious is the terrifying story of a family who shortly after moving discover that dark spirits have possessed their home and that their son has inexplicably fallen into a coma. Trying to escape the haunting and save their son, they move again only to realize that it was not their house that was haunted.

DVD and Blu-ray Bonus Features Include:

§ “On Set With Insidious” Featurette

Insidious has a runtime of approximately 102 minutes and is rated PG 13 for thematic material, violence, terror and frightening images, and brief strong language.