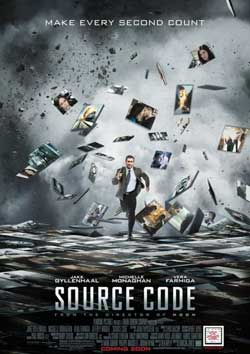 An action thriller centered on a soldier who wakes up in the body of an unknown man and discovers he’s part of a mission to find the bomber of a Chicago commuter train.

Colter Stevens wakes up in a train heading on a destination he doesn’t recognize, in a body that isn’t his and talking to a girlfriend who he doesn’t know. This is the scenario that begins this sci-fi-thriller-future-time-driven movie. As with most of these themed films, there develops a plot within a plot by factors within the scenario. That may sound confused, but Source Code is a tight interwoven mystery. Colter is obviously a soldier, with an agenda. This agenda is revealed early on in the form of a technology that is able to send him back in time and inside the mind of another….namely a passenger on the train who fits his closest profile. Though as each session passes which ends with the train exploding, he is given instructions to focus on the facts and determine the train’s bomber. Easy enough, Colter reinvents his process each time, looking for clues, looking for suspicious characters and interacting with the train passengers in different ways. His girlfriend Christina Warren (Michelle Monaghan ) who actually is unaware of the mind altering change becomes central to the mystery and her level of involvement to Colters reality. Colter becomes attracted to his new pseudo girlfriend while in his mind injected mode. The military team behind this study are experimenting with a new technology so deemed “source code”. Colters only point of real contact is with an advisor named Colleen Goodwin (Vera Farmiga). She instructs Colter and sends him spiraling back into hyper time mode.

Though as the plot thickens and Colter eliminates suspects, so does factors in his present environment. What starts as an exercise in technology and time manipulation soon becomes something much more intriguing and unexpected. Colter who’s only environment seems to be a metal pod of some sort begins to unravel his current situation while inventing his own theories about his state and the state of the future. As he is told, his injection places him in the “moment” rather than in the past.

Directed by Duncan Jones, Source Code is a film that brings on its own dynamics. Viewers will love the deep levels, while more sophisticated minds will appreciate the deeper  scientific inferences into quantum physics and string theory. Duncan and his writer Ben Ripley have put some intricate thought into this film that elevates it to  one of the years most intriguing and thinking man’s releases. It still holds a cohesive Hollywood flair and introduces a romance scenario without being over dramatic. It also leaves the viewers with some solid thoughts about our nature, our fate and the mind itself.

Is it just me or is Actress Michelle Monaghan almost identical clone of other actress Emily Stone? I know this is not a revelation but I kept wanting to call the lead actress Emily. with an almost identical smile and eye structure, I bet I’m not the only one to make this mistake. Jake is looking much thinned down in this role while cementing his own ability to step into a Matt Damon type of film. If you are looking for a great combo pack this year, I recommend this film followed by “The Adjustment Bureau”. If your looking for more then don’t miss “Limitless” my favorite of the 3. Each follows a path of mind, fate and physics, but all 3 their own specific beast.