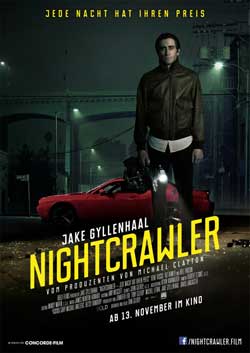 When Lou Bloom, a driven man desperate for work, muscles into the world of L.A. crime journalism, he blurs the line between observer and participant to become the star of his own story. Aiding him in his effort is Nina, a TV-news veteran.

The all American dream kills. A man/woman’s quest to succeed coming from nothing is what America is founded on, well that’s what media from the US constantly tells and shows me. In a world where capitalism rules we are told that success is measured in money and power and without it you are nothing. These ideas are what fuel Nightcrawler, a character study about one mans determination and ambition to reach to the top of his game by removing any obstacles/people along the way.

Gyllenhaal plays Lou Bloom an ambitious 30-something wheeler and dealer who when we first meet him is stealing materials from lots and selling them to construction sites. His past-paced, intense monologues about his work ethics and drive are hints into Bloom’s nature and it is little to no surprise when later we see the lengths he is willing to go to get what he wants. In a matter of coincidence he ends up at a crime scene and watches a cameraman be the first to shoot and sell the footage to a news channel. One thing leads to another and we see Bloom’s sociopathic determination to be the best he can be at filming crimes as they happen – the industry term for this job being a nightcrawler.

Nightcrawler is really a star vehicle for Gyllenhaal and a character study about Bloom who’s passion for succeeding isn’t filled with heartwarming and life affirming lessons (this is no Little Miss Sunshine) but rather has an aura of malice and horror that is entwined with his personality and drive. I kept thinking back to American Psycho and drawing comparisons into both characters and their way of making sure they succeed even if its at the cost of another’s life. It’s Bloom’s reaction to the people he hurts or lack thereof which speaks mountains as to what kind of man Nightcrawler is trying to portray. He tells the director at a news station that he spends all day learning everything he can on the internet. He is a hustler and has found the best way possible to channel his skills at adapting to the world around him. Nightcrawler asks the question if Bloom is a product of his time or if he was born a psychopath? 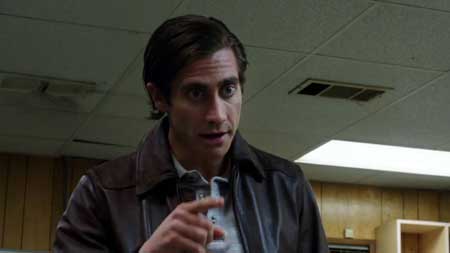 Gyllenhaal absolutely nails it as the creepy Bloom, it is obviously a passion project of his (he is one of the producers) and he inhabits the character completely leaving any trace of the actor behind. His slight weight loss in the film really helps accentuate his facial features allowing his eyes to pop out of his head with a intensity that wouldn’t have worked without a gaunt face. Yet it is his speech patterns and ‘presentational’ niceties which create the fear and unnerving qualities of his personality.

The film does also touch on the ‘reality’ of the news and how stories are twisted and manipulated to create the strongest and most dramatic story which will bring in the ratings. This is something we all know but it is always a nice reminder about how our everyday life is run by executives after higher ratings and more revenue. The other characters in Nightcrawler play more as secondary puppets to Bloom who are there to show us how he controls and manipulates those around him with shattering consequences. 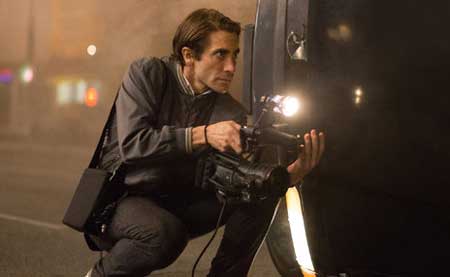 The film is shot with as much confidence as one would expect. The crime scenes are mostly seen through Bloom’s camera and the marvellous pan shots of Bloom filming the crimes which he himself has caused are smart and thrilling. Besides from the exploration into the mechanics of Bloom as a character the film does struggle a bit with pacing and narrative. There were times in the film where it did stagnate and didn’t have the drive needed to push it along to the next scene making me wonder where the film was going. Yet when the film reached it’s climax the culmination of the entire film worked well in creating a solid and satisfying conclusion.

Nightcrawler is exceptionally strong. It’s not as wonderful as I probably wanted it to be but it is an intense and explosive journey into the mind of the American Dream that will leave you pondering about how much society and the media controls us.