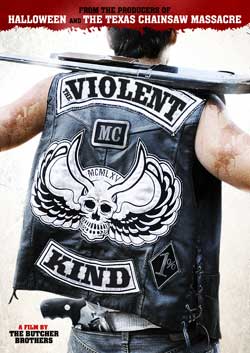 One night at a secluded farmhouse deep in the Northern California woods, a small group of hardened young bikers and their girlfriends are tormented when one of the girls becomes savagely possessed and a gang of “Rockabillies” seemingly from the 1950’s descends upon them to collect what is growing inside her

The Violent Kind, a film by The Butcher Brothers, is one of those films that’s really hard to categorize. Make no mistake, this is fun, gory and over the top but at the same time can feel like a complete mish -mash of genres. Part Exorcist, part Evil Dead, part alien invasion, part Rebel Without A Cause, part, well, you get the idea. One thing is for certain, it will keep you guessing as to what will happen next because, quite frankly, I’m not sure the writers knew either.

The movie starts in a mysterious little shack in the middle of the woods. Something very violent and seedy is going on in there but what exactly that is, we’ll never know. Then, in a somewhat jarring cut, we are in a bedroom witnessing Shade (played by Taylor Cole) and Q (Bret Roberts) having raucous sex while two other members of their motorcycle gang wait patiently outside.

Motorcycle gang? Yeah, but you wouldn’t know it from their looks. Cody (played by Cory Knauf) and Elroy look more like your run of the mill juvenile delinquents than some hardened criminals. That is until two men pull up in a truck and demand to know where Q is. There’s nothing like a good old fist fight to show just how bad of a mutha you really are. The problem lies in the fact that not for one instant do you believe these guys could survive, say, a Hells Angels initiation, much less run drugs, shoot guns and partake in all other forms of assorted debauchery.

But all’s well because they are headed three hours north to a secluded farmhouse where, as Q looks back fondly, gambling, drugs and back-door business were the daily routine. But why are a bunch of hardened bikers gathering there now? To celebrate a birthday of course. Cody’s mother is turning 50 and boy, what a party! This lady even gets two strippers that dance and gyrate around her after she receives a candle covered cake. But it isn’t long before this party takes a turn for the worse.

The Violent Kind is a fast-paced horror movie that delivers more than enough blood, if not enough scares. As mentioned earlier this movie seems to cross all kinds of genres but in a weird way it actually helps the film. For if nothing else, The Violent Kind is original in its own way. You never know quite where this movie is going and at one point you might actually think you have it all figured out only to find the next minute you were completely wrong.

Credit the writers with coming up with such a wild story. Sure not all of it makes sense, and the ending will leave some disappointed and confused, but curiosity as to just what the d*ckens might happen next will keep you glued to the screen. The acting is very well done all the way around and there are no real weak spots. Cory Knauf, while never looking the biker part, does a great job as Cody. Horror fave Tiffany Shepis is strong once again as Michelle, Cody’s ex-girlfriend and well, let’s just say party crasher extraordinaire.

There is plenty of blood that spurts and flows in all kinds of ways but it never once seems like overkill. The special effects and make-up are really top notch, the score and sound great as well. The direction is superb as is the lighting. All around, a job well done by everyone.

The Violent Kind is a movie that I would recommend if for no other reason than you’ve never seen anything quite like it. Some will like it enough to buy while others will be glad they only rented. Whatever camp you end up on, there is no denying its uniquely thrown together mish-mash of a storyline. This movie is gory, crazy, campy and wholly unpredictable. It’s been a while since you were able to say that about a horror film.