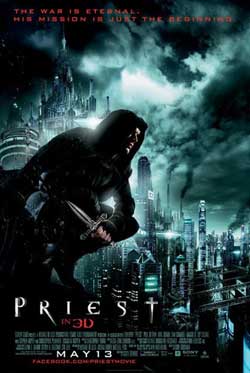 A priest disobeys church law to track down the vampires who kidnapped his niece.

Once again The Black Saint has seen fit to stop by & give his opinion on the latest films playing at your local bijou. It seems like ages since I’ve posted anything, but in actuality it’s only been a little more than a week. I was lucky enough to attend the Creation “Weekend Of Horrors” in L.A. this past weekend (More on that soon), & I actually returned to the mausoleum just last night. But here I am, all jet lagged & exhausted, going to see a movie that I should have seen last Friday but due to my schedule, was unable to.

And that movie is called “Priest”, the latest entry in the “3D or else” films that Hollywood is making us pay a premium to watch. Before I continue, I should mention a little event that I attended about a month ago. There was a “Special Screening” of some “Selected Scenes in 3D” of “Priest” in Manhattan a while back that I attended. It was not the whole film but certain action sequences that were shown to us in 3D. After the scenes were over, we were treated to a lively Q & A with the star & director of “Priest”: Paul Bettany & Scott Stewart. The scenes that were shown were pretty much the trailer & some footage of a battle on a train which were unexpectedly, really good. The 3D was effective (If not showy) & the action was fairly gruesome for a big Hollywood epic.

But selected scenes are just that…scenes. By themselves they’re pretty cool. But put the rest of the movie around them & you have something else entirely. Based on the series of graphic novels by Min-Woo Hyung, “Priest” tells the tale of a group of warriors, called “Priests” who were bred for only one thing: to destroy vampires. The beginning of the film tells us how man & vampire have been at odds with each other for centuries. No one side really able to eke out a victory against the other. That is until mankind created the Priests, who summarily pretty much wiped out the whole of the vampire population. Once the vampire plague was declared officially over, There was no need for the priests & they were disbanded. Now they are forced to assimilate into the general populace, a populace that is fearful of them. There is nowhere for them to take refuge from the hateful glare of those whose lives they’ve saved because of the telltale tattoo’s of a cross that is on their faces. This entire sequence is told to us through some snazzy animation by Genndy Tartakovsky that is both effective & fun to watch.

But of course we know that there are some vampires around somewhere, don’t we? There are of course but they reside outside of the city limits, in the wasteland, where very few dare to venture into. Most of the population resides in Cathedral city, where they are tended to by the church which is led by Monsignor Orelas (Christopher Plummer). Upon learning of the abduction of his niece & murder of his brother & wife at the hands of vampires, Priest (Bettany) asks permission to be reinstated so he can find his niece. He is summarily shot down by Orelas & goes rogue to find her. What he discovers is a lot more than he imagined..

Ok, let’s talk about what’s good with this movie. The acting is good, everyone is believable & I found myself becoming immersed into the atmosphere of the film very quickly. Special kudos go to Maggie Q as “Priestess”. She’s gorgeous & kicks crazy ass! Although I’ve heard of the graphic novels this is based on, I’ve never read any of them. But if they carry the same atmosphere as the film does, then they must be pretty nice to look at. The action sequences in the film are well choreographed also. All of the punches & kicks look good & painful for those on the receiving end of them. And the story itself is rather engaging as well. At least as engaging as a story about warrior priests battling vampires can be anyway.

Now the bad stuff. Much like a film I reviewed a few weeks ago (Dylan Dog: Dead Of Night), “Priest” seems to have cribbed a lot of elements from other films to make it unique. But if someone watching it knows his movies, then they’re going to see a lot of stuff that is decidedly unoriginal here. Take for instance Cathedral city, it is a carbon copy of the city in which “Blade Runner” takes place in. The only difference is that it has a decidedly Catholic look to it. Lots of crosses & such litter the cityscape. The animated billboards aren’t selling vacations or soda, they’re reminding people to pray & take communion. Most importantly they tell the populace that if one “Goes Against the church, They go against god”. This pretty much keeps everyone in line. It’s always wet & dreary just as in “Blade Runner” as well. There’s a whole lot of other films whose influence “Priest” carries on it’s sleeve for all to see. Among them, “Judge Dredd”, “Aliens” & “Blade 2” & even “Star Wars”. Now I know they say imitation is the sincerest form of flattery but this is a bit ridiculous. The Outright theft of some scenarios in this film was a bit too much for me to take. Once again, I don’t know if the graphic novel looks this way but I will find out. The Familiars in “Priest” look exactly like the Reapers of “Blade 2” for instance. The vampires are in large egg sacks just as in “Aliens” except they’re upside down. The entire city is full of kiosks as in “Judge Dredd” where one can find absolution or a drink. Strangely enough, Karl Urban who plays “Black Hat” in the film plays Dredd in the reboot that’s coming to theaters soon. The tunnels at the top of a pyramid shaped structure is lifted entirely from “Alien/Aliens”. I’ll let you figure out the “Star Wars” reference I saw (maybe it’s just me but I don’t think so).

The vampires themselves are different for sure but not particularly scary. They look more like Gorillas turned inside out without eyes & with big fangs. There is a brief view of the Queen vampire (“Aliens” again) that is interesting but hardly worth waiting for. The fact that they’re all CGI doesn’t help either, they look artificial & aren’t scary in the least. But since they look as they do they are one of the few touches of originality the film contains. I’ve never seen inside out Gorillas with fangs & no eyes in a movie before. That’s gotta count for something right? I should also mention that the film was converted in to 3D after it was completed. But surprisingly, it looked pretty good. There isn’t much 3D to speak of but what there is of it is well executed. The cinematography is great as well.

Ultimately, “Priest” is not a great movie. It’s not even a particularly good movie. It’s more like the biggest budgeted movie the SYFY channel ever produced and I don’t mean that in a disparaging way either. It’s just that the whole film is a lot of “Been there, done that” & I was hoping for a little bit more originality from it. It’s okay if there’s nothing else to watch, but that’s all it is…OK. The Black Saint is giving “Priest” two shrouds out of five. With a little creativity they might have had something here. Now let me end this review with a comment made at the event I attended last month regarding “Priest”. When asked if sequels are in the works (by the way, the film leaves the option for a sequel wide open), Director Stewart claimed to “Hope so, the studio has enough confidence in it to release it in between “Thor” & “Pirates Of The Carribean”. Obviously, the studio made a big mistake as “Priest” finished fourth at the box office last weekend grossing $14 million dollars. Disappointing numbers for sure. But maybe if “Priest” showed a bit more originality it would’ve performed better. It doesn’t matter now as it will be swept away by Johnny Depp & his crew this weekend. Look for it to be on Blu-ray/DVD very soon.

Until next time acolytes, when I will assail you with reviews of other films & events (lots of interviews in the pipeline as well), be reminded to drink your milk, eat all of your vegetables & most importantly…say your prayers. You never know who might be listening….