GLENDALE, Calif. (May 13, 2011) – BUTTERFINGER® is going where no candy bar has gone before, leaping from the concession stand sidelines to the big screen spotlight. Butterfinger the 13th will be the first-ever film produced not by a major studio or filmmaker, but by one of America’s iconic candy brands. And signed on to make movie-making history with Butterfinger is none other than actor, producer, New York Times best-selling author, and now, first-time comedy-horror film director, Rob Lowe.

Butterfinger’s history with irreverent comedy drew me to this really unique, fun project, said director Lowe, who plays ‘Chris Traeger’ on hit comedy ‘Parks and Recreation’ and recently guest starred on three episodes of ‘Californication.’ As an artist, I get to explore the world of horror movie-making with a comedic twist. It’s going to be a psychological thriller that will leave you laughing.

Banking on Lowe’s brilliant instincts and compatible sense of humor, the comedy-horror will bring to life Butterfinger’s Nobody’s Gonna Lay A Finger tagline while warning fans that You Can’t Scream With Your Mouth Full. Butterfinger the 13th” will take its audience on a perilous journey with the film’s hero, whose paranoia leads him to believe that someone wants to lay a finger… in more ways than one.

Butterfinger is always looking to deliver new and exciting entertainment experiences for fans, mixed in with a heavy dose of clever fun, said Butterfinger spokesperson, Tricia Bowles, Nestlé USA Confections & Snacks. With Rob Lowe behind the camera for this humorously horrific masterpiece, ‘Butterfinger the 13th’ is sure to be a hit, and we can’t wait for Butterfinger fans everywhere to be scared funny.

Lowe’s uniquely clever sense of humor made him a top choice to direct the Butterfinger film, in addition to his knack for being on the cutting edge of entertainment trends. His starring roles in The Outsiders and St. Elmo’s Fire blazed the trail for myriad teen angst-ridden films in the ‘80s. In the 90s, Lowe leant his comedic chops to films such as Wayne’s World and Tommy Boy. In the last decade, Lowe went on to co-star in the hit TV drama The West Wing largely credited for paving the way for political dramas to become ratings successes on televisions worldwide.

On the heels of publishing his memoirs in The New York Times best-selling Stories I Only Tell My Friends, Lowe will begin production this month on the 25-minute short film Butterfinger the 13th, which is being kept tightly under wraps. Expected to deliver a movie-making experience unparallel to any known to mankind, according to Lowe, the film will give fans laughs, screams, tears, fears, and even a special opportunity to participate in the production. Lowe also will be making an exclusive public appearance this summer to meet with fans and share the movie-making experience with them.

This film will be a great opportunity for me to entertain and interact with fans in a uniquely humorous way, added Lowe. Personally, I’m just glad Butterfinger finally will help me pay back my folks for all the times when, as a kid, I let my favorite candy get stuck in my teeth and ruin God-knows-how-many sets of braces.

The top-secret Butterfinger the 13th production is coming soon to an undisclosed location near you, which you may or may not be able to find on a map, but if you really know Butterfinger, you can probably figure out where, and besides Rob Lowe says he really wants to go there. More information about the film is available online at Facebook.com/Butterfinger. 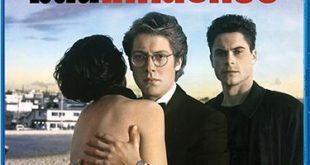