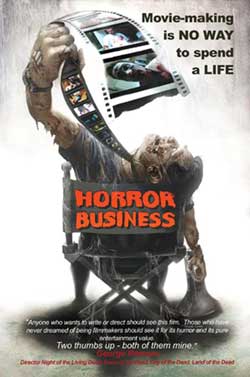 Filmmaker Christopher P. Garetano probes the minds of some of the horror business’s most intriguing personalities in this thought-provoking documentary shot over the course of two years. Highlights include interviews with Mark Borchardt of American Movie, David Gebroe of Zombie Honeymoon, Herschell Gordon Lewis of Blood Feast, Sid Haig of The Devil’s Rejects and film critic and author Joe Bob Briggs.

Horror Business is a film that you can’t help but love. In this case maybe its all for the wrong reasons. A film that takes a rather behind the scenes look at filmmakers in the horror business comes off as a “mostly” where are they now, where where they then bunch of underground rogues in the field. Not that they don’t have heart and offer something genuine though in return.

For many fans, you’d expect the usual offerings of on screen advice from Wes Craven, Carpenter, Romero, and other “fill intheblanks” best of names to give you the down and dirty on the industry. Well we get down and dirty …though much of who the films talks to is really more the struggling filmmaker that you see at conventions trying to slug there wares to gullible buyers who are willing to take a chance on shoot from the hip films. Yes… they pride themselves somehow on “not being distributed to market there no holds bar films to the occasional hardcore fan. But that’s ok, because really that “is” the soul of underground and guerilla filmmaking

Well the good news is we do talk to a few serious filmmakers as well. I suppose all the filmmakers we talk to are serious …just that the reality is they really aren’t ……in the usual scheme of things and big picture.

Horror Business has its charm I’ll give it that. Director/ writer Christopher P. Garetano I’m assuming was trying for one thing and ended up with another. The “another” is a documentary that almost comes across as a mockumentary. This mockumentary is in fact reality for these folks rather than a Spinal Tap spin off, so we get quite a range of real life characters who are more interesting than that films they create.

Where to begin? We spend some time with the man of underground conviction Ron Atkins, who in most of his shots comes across simply as bothered and angry. We get the rundown of his history of drug-use, his stamina for the dark side and his willingness to just shoot films out of indulgence for hardcore violence. Never actually seeing any of them before I can’t comment on the products themselves. However, the humor comes in the way that after a while his wife pretty much takes over the interviewing while he sits and listens.

Then to contrast that we spend a little time with filmmaker John Brodie. John strikes me as a fun guy to have around. He’s a car salesman, preacher and lunatic rolled into one. It’s a bit of a case of someone who doesn’t realize they are completely insane and yet truly believe in everything they disclose. This kind of material is too bizarre even for a cult film scripts and that’s what makes the visit fun. God help us though if it’s even a hint of truth.

Mark Borchardt of “American Movie” starts us out with the filming of his latest piece called “Scare me”. While the footage and scenes enacted are entirely laughable…the attraction that I think Mark doesn’t quite realize is that the interest is more in him as a personality than his actual work. Some of his in camera advice is really genuine and truthful. This is what makes his scenes worth the price of admission.

Do we get to visit a few names along the way??.. of course. But it’s obvious it was more of a “hey-speak-into-the-camera-assault approach while attending horror conventions than actual sit down interviews. Tony Timpone of Fangoria gives us a few words…..and really a few is all. Hey Tony how bout a look at the Fangoria production line or tour of the facilities. That’s what we really want to see. Well yunno…. times are busy I suppose.

If I sound a bit apprehensive of this film, I’m not. I think this is quality entertainment at the expense of others peculiarities. It has alot of spark and honesty in what is captured that is priceless to viewers. What viewers should know though is it’s not your who’s who of horror…..its actually more of your who’s not of horror. Do I recommend it ..hell yes! Director Christopher P. Garetano really captured an honest bit of Americas film rogues. They are quite the loons but they sure are entertaining.

Its a great tool to know what beginning horror filmmakers go through and end up if the cards are not on your side. What is missing I believe is the “other side” of the coin. The hardworking, decent budget lines of filmmaking. The kind that “do” get picked up and sell copies. If anything I’d like to see a Horror Business part 2 come out that talks with these folks as well. That way students of the art can make there own minds up on which path to follow. Lastly, a hats off and and hell yeah on a great editing job and flowing piece. This is one I’d watch again.