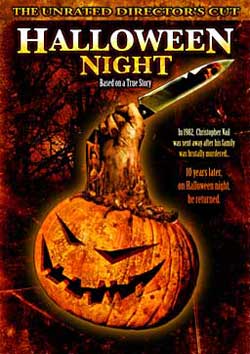 In this gory chiller based on real events, a teen’s Halloween bash is spoiled — but becomes eerily authentic — when lunatic Chris Vale (Scot Nery) escapes from an asylum to learn the reason behind his mother’s murder. Determined to find out the truth, Vale returns to the scene of the crime, his childhood home … which happens to be party central. The cast also includes Derek Osedach, Rebekah Kochan and Jan Anderson.

As the cover and opener title card boasts, this is based on a true story that occurred in 1982. The obvious comparison is that it’s a “Halloween” style knock off. But let’s put that aside and concentrate on the film itself. Halloween night actually lives up to a slasher fare offering and does so pretty well. We’ve got all the key ingredients here…..young adults, a party, Halloween, a killer, some sex scenes and some ignorance on the partygoers during his time of year. Written by Michael Gingold of Fangoria doesn’t surprise me. The script is well done and takes in all the classic slasher story styles. The term …been there, done that is something that may come to mind, however I think as viewers we’ve come to expect a certain mix of formula driven plot points to feel like we are at home with the material. If not, then how would you explain all the other slasher films coming out recycling the same material as well?

What I’d call different in this instance is a budget that didn’t support an all star cast to bring it up to big studio markets. The cast within is fine, fitting and appropriate…though you could easily see parts and characters being driven by the cast from “Scream” if the cash was there to fund it.

The story begins much like, Halloween, Boogeyman (1981) and a few others I can’t place at the moment. A young child witnesses his mother being killed and raped, set up by his father and then undergoes an accident that leaves him severely burned.

His father commits suicide, and young Chris Vale (Scot Nery) is institutionalized. The burn marks have prompted him to wear a rather grotesque mask all of the time, and like “Halloween” Chris murders the guard staff and returns to his child hood residence. The residence by the way has been rented out for an annual Halloween party thrown by the local kids.

Yep, if i didn’t mention it. It’s also the holiday of Halloween. Now Chris Vale is no Michael Myers. His presence is a bit more clumsy and frail than the enigmatic bulky Myers, but he does offer quite a few classic style kills. Stabbing, puncturing, slicing and hacking, Chris holds his own due mainly to the excellent practical FX work by Tom Devlin. Directed by Mark Atkins the camera shots, lighting and edits are very fitting and influenced by the classics.

The cast of young adults is a mix of hot ladies and young dudes who are targets for slaughter served just the way we 80’s slasher ghouls like to be fed. I don’t think this film has enough pizazz though to warrant a franchise and there was a bit of confusion on my part. I assumed the fake looking mask was exactly that thu most of the film, howver as the film progressed and the scarred killer was never revealed….maybe the mask was supposed to “be” his face. If so, crappy job…if not…then I was surprised we didn’t get more reveal on that. 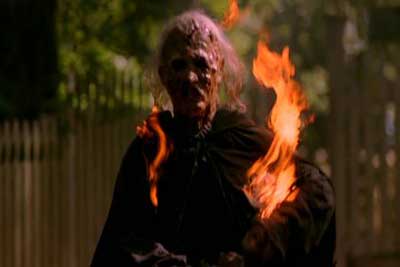 A few other things that distracted me was Chris’s ability to drive a car, which wouldn’t have been a skill he learned being institutionalized. There were times when he was in full killer mode and other times where you though maybe you were just watching a dorky kid give it a go. So on that note, I think a few of the men could have easily overpowered him and kicked his ass. Again….not Michael Myers!

Overall, this is a decent flick to add to the collection. You get what you signed up for and therefore should be satisfied with that fact alone. Production is slick, score is eerie and the acting makes sense.