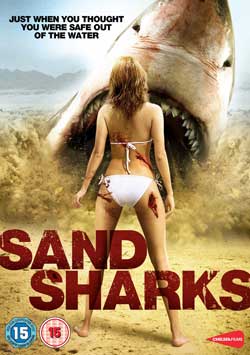 An underwater earthquake cracks open a crater deep beneath the ocean’s surface unleashing a prehistoric predator. On the sleepy island of White Sands, local teens drink and party beside a beach bonfire. One of them wanders off after a pretty girl and disappears, leaving only a severed hand behind.

Ain’t no party like a Sand Shark party cause a Sand Shark party don’t stop! Sand Sharks, this fishy little tale, I can’t help myself, is a spoof off of one of my favorites, Jaws. It also paid homage to not only Jaws but also the movie Tremors. The big fish in little beach story takes place on the beautiful Island of White Sands, an island that has seen its better days financially. The town’s people are still recovering from the underhanded business deals made by Jimmy Green (Corin Nemec). In my opinion Nemec steals the show. 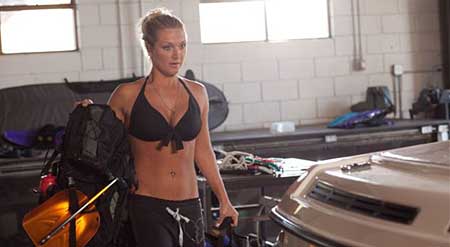 The Mayor Green who is Jimmy’s father is presented by his son/ events planner, aka Jerk senior and Jerk Junior, a plan to bring the island back into the green by throwing a huge beach party for Spring Break. The Mayor, being a money hungry man, decides to take Junior up on his deal. Jimmy/Jerk Junior decides to call the party the “Sandman Party”. What an original thought. He and his beautiful intern and computer wizard plan an extreme party and use the internet and social network to draw a crowd.

Our main character “Sand Shark” a shark that hunts people by ‘swimming’ though sand makes its debut when some awesome kick booty dirt bike riders are riding in the sand dunes. The first rider, you guessed it, is eaten by the sand shark. The second rider stumbles across his friend’s helmet and then comes face to face with our finned friend. 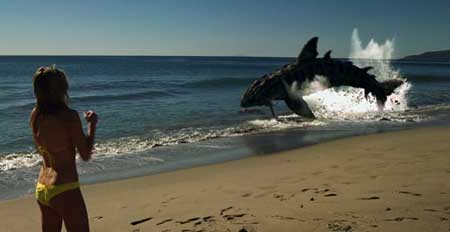 The bikers helmet, with his head still in it is discovered on the beach and White Sands finest are called. The only two cops on the resort, Sheriff John Stone (Eric Scott Woods) and his sister Brenda (Vanessa Lee Evigan) are perplexed on what could cause such dreadful injuries.

Brenda contacts Sandy Powers (Brooke Hogan aka Hulk Hogan’s lil princess) a young female scientist who specializes in shark attacks.
Scientist Sandy Powers finds a tooth in one of the many body parts that start to accumulate. She determines that the tooth may possibly belong to a prehistoric sand shark. A baby sand shark at that. 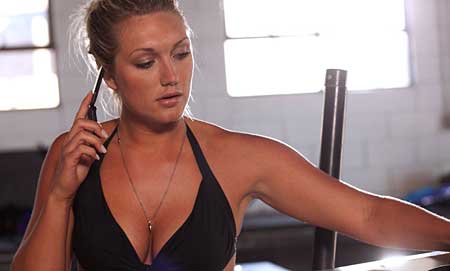 Meanwhile, Mayor and his son decide not to close the beach and to continue with the party. The Mayor declares that the beach will stay open! Oh boy, where have we heard that before, hmmm? The mayor sort of loses his head and a few other body parts over this decision.
The party continues, thousands of kids (not really, more like thirty) swarm to White Sands beach for the party of the century. (Not Really)
Jimmy decides that no matter what the show must go on. Even when he is tipped off early that there will be uninvited guest at the party.
The party turns into a wild feeding frenzy and Jimmy realizes he has made a big mistake. He along with Sheriff John Stone, Scientist Sandy Powers and a crazy eyed fisherman named Angus (Robert Pike Daniel) who fore-warned them all this would happen, Oh boy, where have we heard that before, hmmm, come up with a brilliant, (not really) plan to take down the blood-thirsty, human eating, prehistoric Sand Sharks. 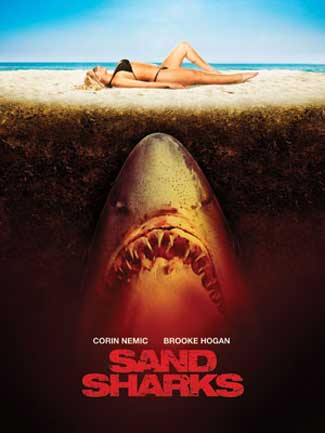 In the end, Jimmy surprises us and there is and ‘Awe shucks, how sweet’ moment. The ending unfortunately had the energy of a wet fire cracker popping. But their plan works and the handsome Sheriff John Stone and the beautiful Scientist Sandy Powers end up taking down the mama of all sand sharks. 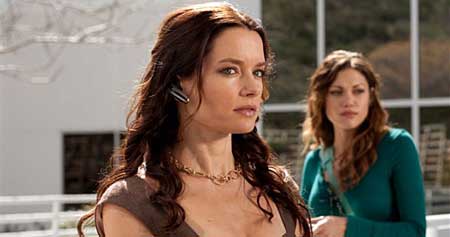 The CGI (Computer Generated Imagery) effects bite big time, no pun intended. And the acting could have been a little better. I however, really enjoyed this little fish tale and can’t wait for Sand Sharks II, Sand Sharks III, and Sand Sharks IV and so on and so on.