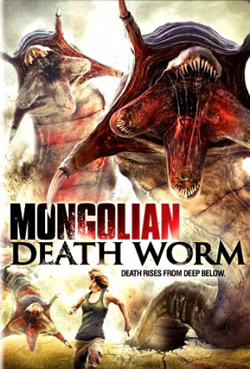 When an American oil company sets up an experimental drilling plant out in the vast deserts of Mongolia, they awaken a nest. The deadly creatures begin to breed and spread, devouring everyone in their path. The only person who can stop them is treasure hunter and adventure seeker who spent his life searching for a legendary tomb, fabled to be protected by the Death Worms. He knows he must do what he can to kill the creatures, but stopping these monsters may mean destroying his life’s work forever

I almost feel obligated to give “Mongolian Death Worm” a glowing review, only because I had met the films’ star, Sean Patrick Flannery in Indianapolis at HorrorHound Weekend less than a week ago. Aside from the normal autograph session, he was seen out after hours chatting with fans, and an all around great guest. We had a little chat waiting for the elevator and I could see why the guy is a star. So knowing that it was a SyFy Original, my expectations were low. Not that I don’t enjoy them, they are just made on the quick and cheap. They follow a simple formula and they work. “Mongolian Death Worm” is no exception. It accomplishes what it needs to and managed to entertain throughout.

After an American oil company sets up shop in Mongolia, they begin to have problems around the plant and workers end up missing. The plants head Patrick (Drew Waters) decides he will stop at nothing in order to keep his discovery hidden from the big wigs he works for. Treasure hunter Daniel (Sean Patrick Flannery) has a lead on something big, though no one believes him. He ends up with the task of carting some medicine and medical help in the form of Alicia (Victoria Pratt) to a small village where some sort of plague has erupted. It seems that Daniel is in trouble with some local gun runners and to top it off, the oil plant has awoken the mysterious and deadly Mongolian Death Worms. Legend has it, that these worms are protectors of Ghengis Khan’s tomb, as well as his lost treasure. 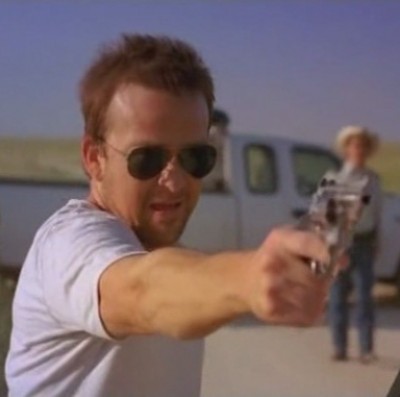 With a story like that, this film should have kicked all kinds of ass. It never comes close to that stature though it does manage to at least continue with SyFy’s formula that is become a Saturday night ritual. It only delivers on the cheese ball fun and that is all we can really expect. For one, the film should not have been called “Mongolian Death Worm”. It mainly focused on the story surrounding it and not the worms themselves who really only appear briefly. And second, there were more than just one Death Worm, should have been plural. Since this was a television film, the worms took off with their prey and that was that. Plenty of opportunity for some grue, sadly, there was just none. And if you’re someone like me who notices technical issues, then you might find SEVERAL continuity errors running throughout the film.

What did I like about the film? Sean Patrick Flannery manages to embody one of my favorite types of hero: the bumbling one who just seems to get lucky at some point and save the day. This is a character along the lines of Ashley Williams, Jack Burton, or maybe to a lesser extent, even Indiana Jones himself. With a stronger story and a bigger budget, this really could have been something awesome. I can only hope that someone sees this film and realizes that Flannery would kill in a role like that given the right project. It was also great to see Victoria Pratt, who still has the looks and charm that I always enjoyed from her “Cleopatra 2525” days. It was too bad that her character wasn’t quite as interesting as Flannery’s, but she tries. The worms looked like, well, worms I guess and the CGI was much more convincing than I had expected.

I have to applaud SyFy for giving us these silly little creature features. They’re great for passing the time and they usually make me smile. I hope they keep them rolling out because I will keep watching. As long as I’m not the only one. There’s some really strong talent that does these to pay the bills, waiting for that gem they have been waiting for to come along. SPF needs the lead in some sort of action horror comedy ASAP. The man has a natural charisma to entertain. I witnessed first hand his Vinny Barbarino impression and it was actually pretty damn impressive.