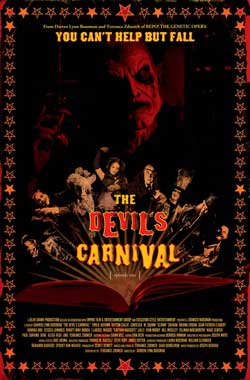 I feel like this should be reviewed as separate entity from say watching the dvd/torrent or even seeing it in the theater when it gets released on a regular run. I have to write about this as its own thing because right now the way the film is being shown is in its own carnival environment with the director Darren Lynn Bousman and writer/star of the film Terrance Zdunich riding around in a van and showing it in various cities. 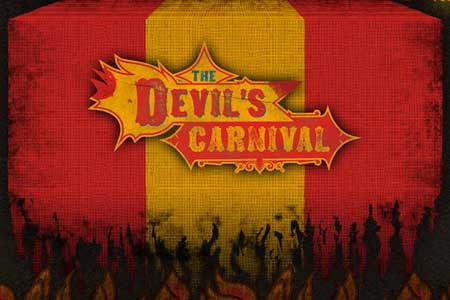 For those out of loop here’s the history lesson, for Repo/shadow cast people skip to the next paragraph… So back in the very late 90’s Terrance Zdunich started doing stage shows of what would in 2008 become “Repo! The Genetic Opera” Repo has lots of hard core fans that do in fact treat it like it was the next “Rocky Horror Picture Show.” In fact the marketing of the film SOLD IT as the “The Next Rocky Horror Picture Show” and well theater kids and the sleazy old people that have been doing “Rocky Horror” Shadow cast since the late 70’s bought it… hook line and sinker… but I’ll get to that… That’s all the history you really need to know… if even.

Now this is a kind of organized road show…. And I mean kind of each city is drawing from the local talent. For instance on the way into the theater was a gorgeous girl in a mermaid outfit greeting the crowd with one liners and smiles, as to imply the freak show atmosphere… I’m not sure if this was a professional actress but she certainly had her act down. 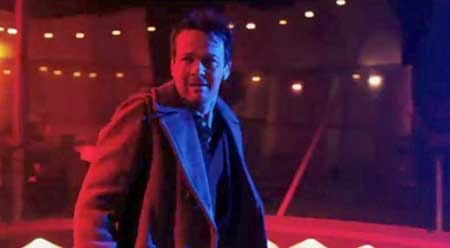 Then if you got the VIP tickets (and us journalist ALWAYS get the VIP treatment) you get a very informal meet and greet with director Darren Lynn Bousman, Terrance Zdunich and in the case of the Orlando show Jay La Rose who haunts the area as probably its biggest and most public celebrity. What’s really cool about Jay La Rose is he shows up at a lot of the Orlando Repo shadow casts shows and gets the celebrity treatment which has not gone to his head.

Everything is informal, Bousman, Zdunich and La Rose will answer any questions even it if requires making silly trumpet sounds. Despite the kindness this is William Castle and T.P. Barnum doing the old tag team gimmick… Yes, gimmick, but much like the word “manipulate” it’s not always a bad thing. The parent who manipulates their child to eat broccoli, take their vitamins and do their homework is on par with this gimmick. In a way I felt like I was seeing a rock band who after doing their multi-platinum studio tour of a radio friend rock album decided to now put out an ep and play only small club dates and loose the entourage of douche bags for some very filthy roadies… 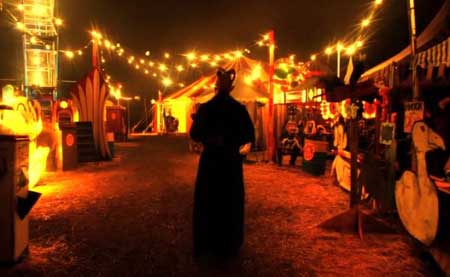 This ends the VIP treatment at which point the rest of the audience is allowed to file in. A crowd of fans who haven’t seen the film but knows it’s costuming and songs purchased on Amazon… And for those who don’t have the gorgeous ladies of the merch tables are ready to sell signed copies of the film and T-shirts… Let’s not forget the huge mark up there… If this sounds cynical it’s not, this film wants to be indie and thought out how to recover revenue rather than be a direct to DVD/download forgotten film. This is art that supports itself… make no mistake though, if you put together a punk band and start playing dates no one cares… If your some area rock band like Kiss and you deiced to play punk shows with no pyro technique to venues that can only hold up to 200 people and even if your fans like your new sound or not they will still show up. 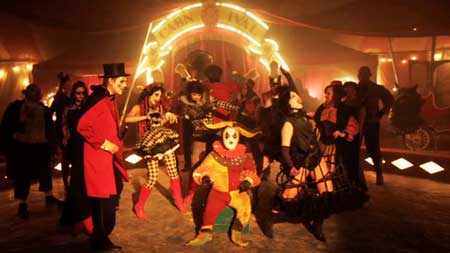 Before the film there is a half an hour of or so of videos, behind the scenes foots of “Repo! The Genetic Opera” this is for the hardcore fan boys/girls in the audience who really want to know it all, lots of Bill Moseley, Ogre, Paris Hilton and Alexa Vega…and of course Grave Robber. this is ring mastered by a Vegas show girl type corseted emcee who runs the costume contest, odd how people can know the costumes from the film before seeing it…

So if you’ve made it this far you’ve read more than 666 and no mention of the film… This isn’t a film you’re seeing; remember that you’re going to have an “experience.” I’m not tap dancing here, but if I started off talking about the film and not setting up the environment and the atmosphere and the audience and girls wearing lots of tight clothes and fishnets I’d be writing a misleading review and in the future, someone else should probably write a review on just the DVD. The time and environment in which a critic sees the film affects how the critic writes about the film… On top of that I don’t think my role as a film critic in the classical definition of the term is accurate, I have to report the experience, the wind up to the film, because before the film has even started everything has built to the massive climax of the opening credits, of which there are none… 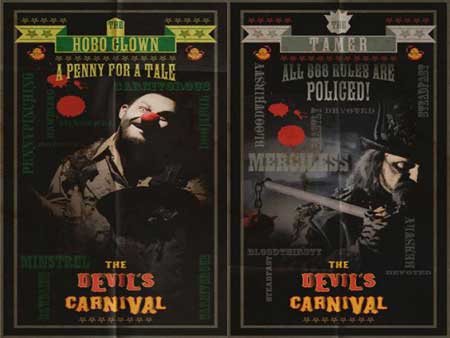 So remember that bit about how “Repo” was being marketed as the next “Rocky Horror” well, I honestly like “Repo” and think that “Rocky Horror” was cutting edge when it came and I like seeing the shadow casts for the girls in the slutty outfits and histrionic behavior typical of the audiences but beyond that “Rocky” is a boring piece of turd to me. I know that is politically incorrect to say that about “Rocky”, I understand that we are supposed to blindly worship the turd that is “Rocky Horror” but in good consciousness I can’t do it. However, I also get that the “next Rocky…” comment could have been meant in regards to the staging and participation of the audience, with the “The Devil’s Carnival” I see the film as neither, it’s something new entirely.

So the film opens…

In the beginning there was God* — I mean Paul Sorvino (Law & Order, Goodfella’s) and he’s discarding his botched creations right after he puts his finishing touches on them.

The film from this point forward becomes very anthology-esq and tells 3 stories based loosely on Aesop’s Fables –not to be confused with Aesop Rock. The first 5 – 6 minutes or so are slightly incoherent with just snippets of what’s going on for you to piece together, a girl (Jessica Lowndes –Masters of Horror “Dance of the Dead” “Autopsy”) shot by an abusive boyfriend, a sexy jewel thief (Briana Evigan “Mother’s Day,”) and a grieving father who kills himself (Mr. “Boondock Saints” Sean Patrick Flannery.) All three find themselves waking up at The Devil’s Carnival with tickets to enter… 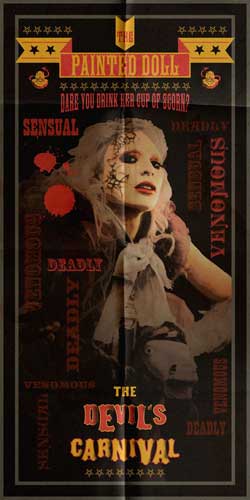 Everything in this film is within its own and realm and environment much like “Repo” you’re watching a film that exists within its own reality… Guy Madden is one of my favorite film makers mostly because there is a childlike quality of imagination that belongs only to his style, “The Devil’s Carnival” feels a little more grown up but still has a threadbare innocence that is over shadowed by a looming wickedness, after all we are talking about the Devil here. The sets have tons of details leading the eye into and out of the action, with a comic book like style. Not so far as the style seen in “Repo” but given that writer/actor Terrence Zdunich was both a story board artist and is also has his own comic book it would be unnatural if it wasn’t present.

However while the music in repo was industrial and rock oriented all of the music in “The Devil’s Carnival” was played on live instruments and it feels alive. This film is alive with a raw feeling and an atmosphere built on a gleeful sense of burlesque exhibitionism with the twisted and painful details of what hides in the peripheral…

The most important thing while watching the film is knowing it’s the hopeful beginning of series. That being said a lot of the character backgrounds are saved by what will happen in most likely in the second chapter. I say that because Lucifer is one of the most complex characters in literature. And in Judeo/Christian/Medieval literature that he shows up in he’s way more deep and complex a character than his antagonist Christ. Jesus just wants to “help” people but look at Lucifer in Milton’s “Paradise Lost” refusing to give up his freedom “Better to reign in Hell than to serve in Heaven.” And no matter how you cut it in the story of “Job” Satan is pretty much the winner. … and Zdunich ‘s Lucifer is just as complex… I’m paraphrasing the film here and using quotes anyway but one of the best lines that Lucifer delivers is “I don’t kill innocent people, that’s Gods work.**”

We have yet to learn why Lucifer is so hateful of Rotti Largo but you’d figure they’d be working together… Like Jesus and Santa Clause do –I have a feeling that back story is reserved for the next installment. But this Lucifer is a progressive and I do have to say it’s nice to see him during an election year not only making souls suffer but also taking time out to read stories to children.

The film is an amazing visual experience, it is the carny, from the hucksters and clowns to the freaks and a glimpse inside the peep show tent… Sinners are taunted and tortured and it’s all done with a fabulous touch of carny sleaze. To sum up “The Devil’s Carnival” is lush, dark and sexy. It’s what “Rocky Horror” was in aesthetic when it was first released into theaters. The energy is of the moment is truly unique, it’s part live show, part 1960’s William Castle midnight showing, part fan boy lap dance, and as said before lots of garters and corsets… Gleeful debauchery is “The Devil’s Carnival” road show experience.

*Pending on what you believe. I personally don’t have any imagery friends.

**For the people in the audience that remember the line I’m sorry I’m miss quoting it. If you remember it verbatim GREAT, I don’t and I don’t care what was actually said. I hope you get the idea of what I’m saying though…. On all levels.