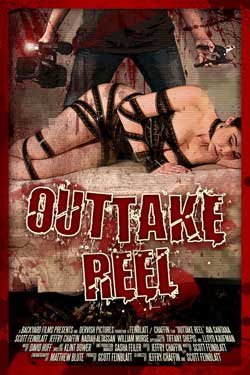 Thomas Grayson is a Horror Film director with principles. The schlock that’s passed off as horror films these days is an affront to his artistic sensibilities. A documentary filmmaker is shooting the behind the scenes footage of Grayson’s newest effort and is looking to make him see the merits of contemporary horror in his own way, but his efforts have dire consequences.

Outtake Reel is told through the compilation of interview footage and behind the scenes “outtakes” of the imaginary film production of “My Brother’s Keeper”. While this kind of cinema verite has been in vogue of late, don’t for a second dismiss it as a “Blair Witch” clone. Scott Feinblatt is successful in creating a very watchable movie in this style with little to no “shaky” cinematography. The “footage” is arranged in a very linear fashion and is relatively fast paced. Before you know it, you are extremely engaged with the story and the characters, mainly because of Feinblatt’s ability to subtly give you information on the characters in very succinct and controlled shots; from the audition tapes of Ashley Swan, to the interviews of Thomas Grayson by the documentary filmmaker Danny Wilson which give insight not only to their characters but to the relationship between the two as well. Half way through the movie you won’t quite understand what you’re watching, but you’ll care enough to stick around to find out.

And that’s another fun element to the film: I didn’t know what kind of film I was watching until the very end, and even then I’d say my definition is subjective. That tells me that different people will get starkly contrasting things out of the film, more than just a positive or negative opinion. Overall I suppose the film could be construed as a dark comedy, although I don’t think that does it justice. Jeffry Chabin’s performance as Danny Wilson begins as an element of comic relief, his character serving to poke fun at the horror genre by decrying any horror movie that doesn’t have” gore and titties”. This is in direct opposition to Danny’s subject, director Thomas Grayson, who believes that horror is about the unknown, the things that induce discomfort, and how the popularity of horror these days is ironically predicated on movies that are largely formulaic, ultimately desensitizing the audience to the violence they’re supposed to be horrified by. That’s a huge philosophical chunk that I extracted from the first fifteen minutes of the film, and maybe I’m reading too much into Feinblatt’s and Chabin’s intentions. I hope not, playing off that philosophy was what made the movie so enjoyable to me. I dig underlying commentary like that.

But there’s other stuff to like as well. The camera work was cool too. I don’t know how many types of cameras they used but, their mastery of all of them was impressive. The behind the scenes documentary camera, the static surveillance camera, the audition camera, and even the camera that was filming the fake movie were all distinct and believable. Hell, the forty-five second shot of the fake movie looked more convincing that some of the feature length footage I’ve reviewed in the past week.

Also, Ava Santana was a rock star. She had to bring out in the actress Ashley Swan a great deal of depth (Ashley Swan the character, and two more characters that Ashley Swan played) and she did so effortlessly. Not to mention she’s not unattractive by any means.

Outtake Reel is a fun movie that, before I knew what was happening to me, I thoroughly enjoyed. You may not get the same awesome commentary I got out of it, but that’s ok, I’m sure you’ll find something to like.