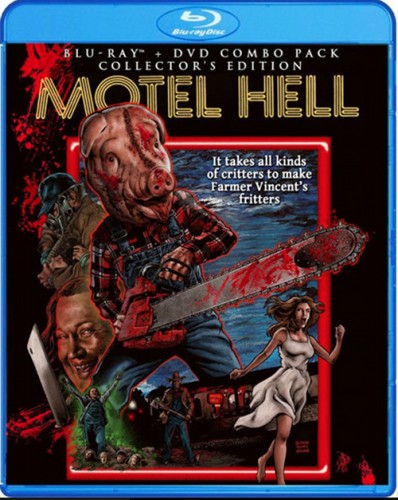 In Motel Hell (1980), Farmer Vincent kidnaps travelers and buries them — alive — in his garden, fattens them up and harvests them to use in his famous fritters!

“It takes all kinds of critters to make Farmer Vincent Fritters”

The sign would say “MOTEL HELLO” if it wasn’t for that damn short circuit in the letter “O”, but as it turns out this campy movie is one HELL of a trippy ride. The cast of characters makes it both fun and dumb. Don’t get me wrong, I think the concept of the movie is to die for, but there’s always been something about this movie that has bothered me. I just get annoyed every time Balbricker (aka Ida Smith aka Nancy Parsons) comes on screen. 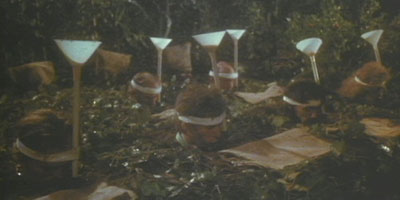 I don’t know if casting someone else for that role is the answer, but it might be. On the other hand, Rory Calhoun makes a good Farmer Vincent. He’s convincing in his role, and that he actually believes in his product and that he’s doing good for the environment. Who knew this was going to be an Eco Friendly movie? I think when remade, this movie could carry a very social and political message that’s topical for today’s movie going public. Well, that remains to be seen. Another good performance comes from Terry, the hot girl that turns out to be the apple in Vincent’s eye. I mean, she’s not the best actress in the world but she looks pretty smokin’ in a wet t-shirt (and I’m not talking about Vincent’s smoked meats). 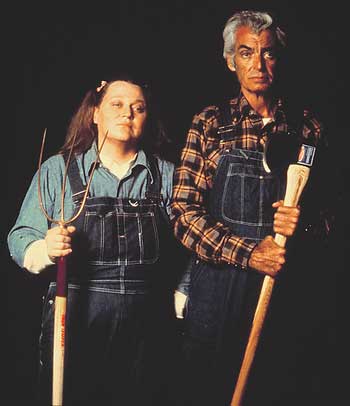 “MEAT’S MEAT AND MAN’S GOTTA EAT”… another cool tag line from this flick. You’ll learn to understand that I’m into movie tag lines. What I’m not into is Sheriff Bruce (Vincent’s kid brother) because he’s one of those dorky police characters. I didn’t like Dewey in Scream either. Every time a horror movie introduces the bumbling cop, and say not so nice things under my breath and it’s hard for me to take the movie seriously. I know this movie isn’t a serious movie to begin with, it borders on being a horror comedy at times. Tagline: YOU MIGHT JUST
DIE…. LAUGHING!

I think I would have appreciated the story more, if they had taken a more serious approach. There is a cool scene where Vincent grabs chainsaw and wears a Pig Head (almost 25 years before we see the Pig Head mask in SAW). It might be the most memorable scene? Turn the “No Vacancy” sign on because the guests are sprouting up and out of the ground like vegetables.

The guests, or victims are a wild bunch of characters too. A band titled “Ivan and the Terribles” role there van after one of Vincent’s road traps and looky looky who ends up in the dirt, none other than (John Ratzenberger) Cliff Clavin from Cheers! He’s going to need a tall drink after this one’s said and done. Then we are treated to two swingers who think they’re mixed up in some kinky bondage when really they’re getting pig tied and put out for a human harvest. For the few flaws that the film does have, it certainly more than makes up for it in pure twisted storytelling. Everything and anything that happens out in the secret garden is A+ horror! It’s the little things that make the big differences, and it’s the gargled voices of the victims that gives me the chills and give this movie a true sense of horror . 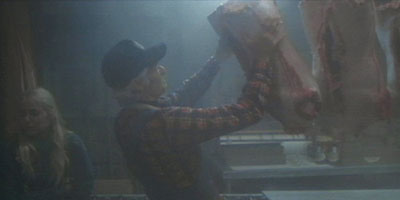 It’s every time they show those potato sacks in rows moving in the garden, that’s a powerful scary image. Oh, and it’s a demented image once the sacks come off and we see that all the victim’s heads are planted row after row, like heads of lettuce but these are human heads. My favorite scene is when Vincent and his estranged sister Ida wrap the nooses around the necks of the planted, and snap, crackle, pop, the necks are broken and the bodies are being pulled out of the ground by a tracker. This is classic 80’s cult horror at it’s best.

The bluray release arrives back on the scene in restored high definition with an impressive audio cleanup. Though best of all is a load of behind the scenes documentaries that reveal how this little gem finally came to light. Even now 34 years later, this film still holds up with its original charm and dark humor. As mentioned by the creators, Motel Hell is a film that works in its own universe never taking the campy route that one might expect. It’s got sass and style with plenty of body parts added to the scenery for good measure.

Motel Hell is and always be a coveted horror classic

Motel Hell is now available on bluray per Shout Factory