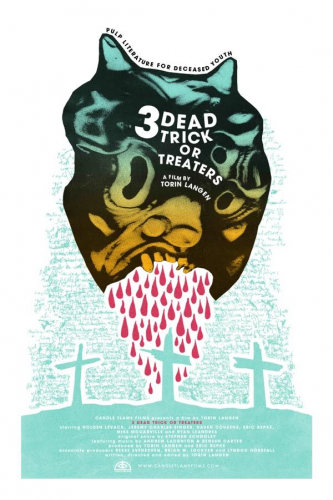 “One of the most surprising, haunting and well-crafted genre films of the year so far… expressionist horror meets HELLIONS with a hint of TRICK R TREAT.” – Jay Kay of HORROR HAPPENS RADIO

Written, Produced & Directed by Torin Langen, read the synopsis and watch the trailer of Langen genre anthology that will be screening across North America during 2017! WATCH THE TRAILER HERE

SYNOPSIS: After stumbling upon the graves of three murdered trick or treaters, a small town paperboy discovers a series of handwritten horror stories tacked to the children’s headstones. Penned by a deranged pulp author driven mad by his craft, the stories chronicle grisly tales of Halloween rites, rituals and traditions. Absent of dialogue and heavy on atmosphere, 3 Dead Trick or Treaters is a horror anthology unlike any you’ve seen before.

Director’s Statement: 3 DEAD TRICK OR TREATERS is a fusion of mood-driven experimental filmmaking and kitsch Halloween imagery. In whole, the project is an expression of isolation and the anxiety that comes with it; characters struggling with morality under horrifying circumstances. This is merged with a love for dime store monster masks, silent storytelling and underground music.

3 DEAD TRICK OR TREATERS on IMDB