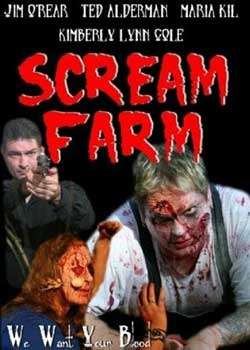 SCREAM FARM follows a group of students who build a Halloween haunted house to help raise money for their senior class trip. The students get more then they bargained for, however, when they come across a substance in the building that begins turning them, and the townspeople, into flesh-craving zombies

Allied Horror and Wicked Dreams bring you a new vision in zombie horror films. The name of this one “Scream Farm”. Now if you are like me, you are all too familiar that the zombie concept is way overdone to death. Lucky for us they’ve introduced a new zombie cause…bad weed. Yep, there’s some chemically enhanced bud floating around that upon puffing a few tokes turns your bloody ass into a flesh eating zombie. Notice I said flesh eating rather than pot smoking zombie.

Drop us down right into a local small god-fearing town where the locals are prepping a annual fundraiser haunted house called “Scream Farm”. Now to jump back a sec, there seems to be a big drug operation going down in town. Sadler (Jim O’Rear) and his gang of thugs are warring with Mr. Marino’s lackeys. In the intro, a drug deal gone bad is invaded by Sadler and his crew. The focus is a new weed that Sadler wants to get his hands on. Supposedly the stuff is unlike anything else going around. Well you’d think they would investigate the batch per sampling better as the weed leads to instant sickness.

As the drug leaks put per a botched hiding job from Sadlers boys, the locals don’t take long to smoke it up and turn into zombies. (insert some sort of don’t do drugs campaign). The effects involve a bloody nose into blood vomiting , convulsions and then blackened eyes. At that point, your as good as zombified

The local gang working on the haunted house include Jason, his girlfriend Heather, Jeremy (Matt Cox)..the monster maker, David and the girls Kelly, Robin and Brandy. The group is thick in the sh*t as Sadler comes looking for his zombie weed. Well, add to that now a town full of pot smoking-turned zombies and you got yourself a battle to the death. As expected there is some share of anxiety, confrontations within the scream farm and a few who just get eaten. Highlight comes in the way of a martial arts battle which is convoluted seeing that one of the martial arts experts is now a zombie who’s supposed to be “dee-da-dee”. But hey, I found the idea kind of funny and the actors seemed to really know how to spin a few moves ….so I’m diggin it.

The film has its share of nudity, but only enough to claim it does. Deborah Funes gives us a brief but well anticipated peek that is actually much more effective when you view it frame by frame. The part that made me jump back a bit was the naked old dude who attacks the group. I thought i might have duck in fear of getting pud-slapped. Oh well I guess not all zombie wear clothes, right? Though it does make you ask the question……what was he doing “just” before the weed tokin?

Special mention on this one goes out to our own Vamp and staff writer Sarah Virginia Brock who plays the role of Heather. It’s good to see the crew making there rounds not only covering the business but “in” the business.

Surprising for a young production these folks have got it down. With most low budget operations you expect certain things, but in this case it’s easy to see that Allied Horror has got there bases in order. Even with a limited budget they still pull the stops where the stops are needed. To start with… the fight scenes who are credited to Miles Spencer are actually pretty well done. In films such as these, it’s easy to detect the faking aspect, though Miles has really stepped the choreography up to par. Actors and stunt actors pull it off and make the fights work. And in case your wondering, there are more than a couple of these confrontations. Director/ writer Jim O’Rear has kept things basic, but fun. The FX work is confident and the scenes are cut well. He also happens to be one of the more standout of actors in the film.

Playing the role of drug lord Sadler, he shows true presence on screen and makes the character work. I’ve seen many low budgets where this same type of role isn’t effective and kills the momentum. However without belaboring the point it’s good to see an effective bad guy role. Scream Farm is an impressive micro budget release which delivers what you signed up for…give it a go. 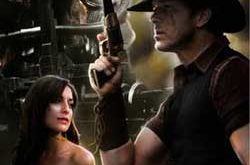