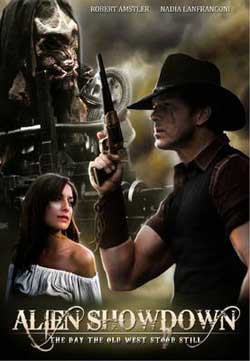 In the mid 1800’s, vigilante cowboy Reinhard is running from the law, when an alien lands on earth. Reinhard must not only protect himself from getting murdered by greedy bounty hunters, but he also has to figure out how to stop the murderous alien from finding sources for survival and calling it’s convoy of aliens to help take over the planet. In present day, professor and scientist, Marina, also faces the task of preventing an alien takeover.

Alien Showdown: The Day the Old West Stood Still is exactly what it sounds like; a ridiculous movie about a cowboy who must save the Wild West from an alien attack. Alien Showdown is directed by Rene Perez, (The Dead and The Damned) and stars Robert Almster and Nadia Lanfranconi. 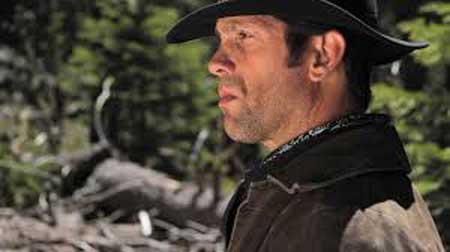 The alien looks exactly like the Predator. It’s extremely angry and has a gun that shoots laser beams that create simulated looking fires. Somehow, the alien doesn’t notice Reinhard watching him so he escapes without a scratch. Reinhard finds the crash site and there is another alien who has been crushed by some debris. The other alien looks like a typical “grey,” and he tells Reinhard that the predator look alike is on earth searching for the means to survive, and once he finds them he will call in a fleet of aliens to help him take over planet earth. It becomes Reinhard’s job to prevent this alien takeover from happening.

In modern times, Lanfranconi’s character Marina is faced with a similar problem. She is a professor who is participating in a study of an alien device that was found in the mountains along with Reinhard’s diary (that he stopped to write while hiding from the alien.) One night, the helpful “grey” that had previously helped Reinhard, speaks to Marina in a dream and tells her that if she does not fix the alien device found in the mountains, the aliens will come and attack earth. 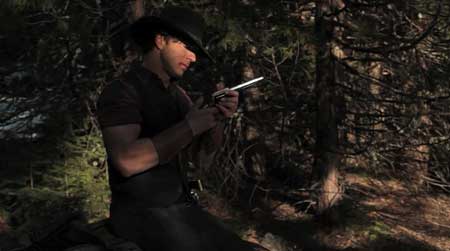 This movie was very hard to watch at times. The acting could be very over dramatic at times, the set and effects were unrealistic and many things in the movie did not add up or make any sense whatsoever. An example of this is that Marina gets access to Reinhard’s diary from the 1800’s. This two hundred year old diary is in pristine condition. The pages are crisp and clean and Marina is even allowed to take this ancient artifact home with her for a few months. Little details like that made the already extremely unbelievable movie, even less believable.

Alien Showdown focused a lot on fight sequences. There were tons of scenes that involved punches being thrown. The fight scenes look really fake. It is pretty apparent that the punches being thrown are not connecting person or object that is supposed to be getting punched. All of the fight scenes were choreographed in a similar way so they all look the same, I felt like I was watching the same scene over and over again. There were also a lot of scenes that showed Reinhard running through woods, either from the bounty hunters or the alien, and they all looked exactly the same to me. The movie was action packed and full of fighting or chase scenes, but they were all similar so it took away the intensity and made it seem dull. 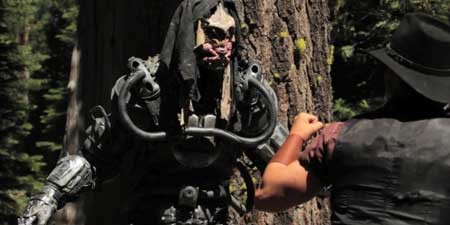 Alien Showdown: The Day the Old West Stood Still was not meant to be a masterpiece or critically acclaimed. I am sure a movie about an Alien invasion in the Old West was not supposed to be extremely realistic. It was meant to be entertaining- which it was. I was definitely intrigued because of the how different the concept of the movie was. I did find myself getting bored because it lacked intensity and it was pretty predictable, but I enjoyed how outrageous and goofy the movie was. Unless you normally watch movies similar to this one, I would skip over Alien Showdown. 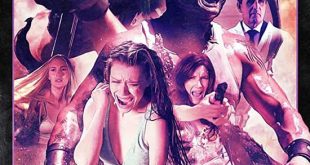 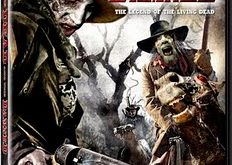