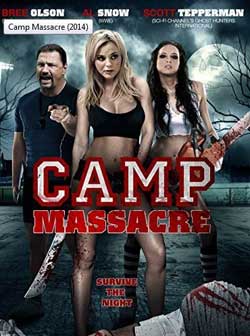 Overweight men appearing on a reality show called By the Pound that is shot at an old summer camp are killed off one-by-one by a mysterious killer wearing a chicken bucket on his head. Will any of them survive to win the show’s grand prize of a million dollars?

With a name like Camp Massacre I expected this horror-comedy to be a parody of the cool old school summer camp slasher flicks I grew up on (and love so much). Unfortunately that wasn’t the case as it is instead about a killer knocking off a bunch of fat guys on the set of a reality show (the film’s original title was Fat Chance and I think that it works so much better). While it wasn’t the best movie I’ve ever seen I will say that it is a lot better than about 99% of the other horror comedies I’ve seen in the last twenty years or so. Some things work for it (I actually dug the premise and thought that the cast rocked) while others don’t (the opening scene is pointless and for the most part the film just isn’t that funny as it relies too heavily on fart jokes and gross out humor), but overall I can’t say that I really disliked it despite the fact that it is overly silly at times and is a bit too long. 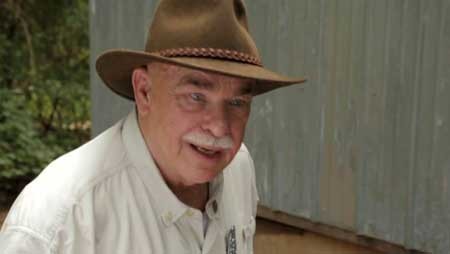 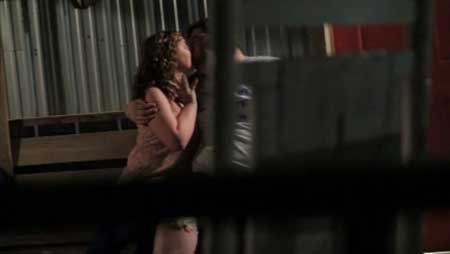 Without a doubt the film’s biggest strength is its cast. I’ve had the pleasure of working with Jim O’Rear (who co-directed and plays the part of Warren W. Gilley in this film) on a horror anthology film that I co-wrote called Volumes of Blood (he appears in the segment I wrote entitled “A Little Pick Me Up”) and the guy is not only super talented but just all around an awesome person in general. He owns this movie and I loved his portrayal of the sleazy reality show host as I thought that he had some of the best lines. I loved the selfish, money-hungry character and I thought that O’Rear did a great job bringing him to life. The same could be said for Natalie (Ava Cronin), his poor producer/assistant. Cronin really delivers here and as a result Natalie was probably my favorite character in the movie. We also get the always cool Al Snow, former Michael Myers Dick Warlock, former (?) P*rn star Bree Olson (in a very small role), and the awesome Shawn C. Phillips in a blink-and-you-miss-him cameo. I thought everyone did an excellent job in their respective role and I can’t complain one bit about the acting in this film as everyone brought his or her A game. 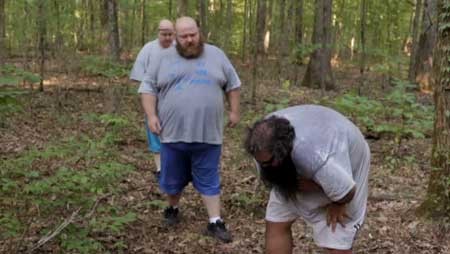 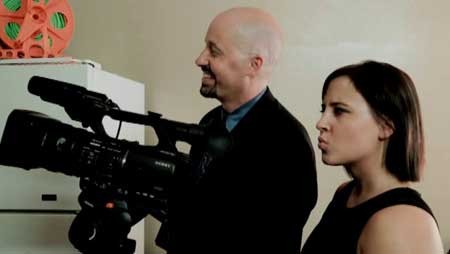 I actually enjoyed the premise as well and thought that it was different and creative. It isn’t often that you see a movie where a killer is targeting fat guys and I applaud writer Daniel Emery Taylor (who also plays the part of Greg) for coming up with an original idea. Though I really wasn’t a fan of the look of the killer as it was pretty cheesy I actually dug his motivation for doing what he did and thought that it worked in a bizarre way. It was sort of nice seeing obese men playing the victims for a change as opposed to the usual beautiful people that I am accustomed to seeing get sliced and diced, and I thought that it was a nice touch and a pretty clever concept.

On the downside though, Camp Massacre isn’t without its flaws. The opening scene is completely pointless and has absolutely nothing to do with the rest of the movie. It is basically just there to show Bree Olson nude and while she actually does a good job in terms of acting in the scene before she gets nude I thought that the entire bit just felt totally out of place (and was that supposed to be a Herpe on the heavy-set chick’s lip or what?). I also felt that most of the jokes in the movie fell a little flat. I didn’t really find the biggest majority of them funny and other than one or two moments I didn’t laugh a whole lot while I was watching this film. I also feel like I have to say something about the plastic machete that the killer uses too. I know that the budget for this film was probably less than idea but come on! That machete was pretty ridiculous and looked like a toy that you could buy at K-Mart around Halloween. 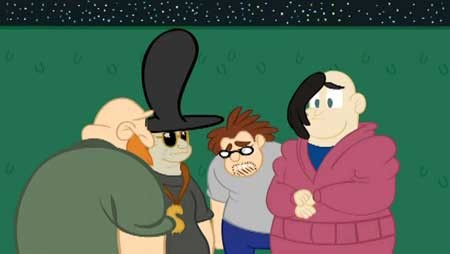 I enjoyed Camp Massacre for the most part. I thought that the cast rocked, it had an interesting premise, and O’Rear’s direction was quite good. I sort of wish that they had gone a more serious route though instead of trying to make it funny as I actually believe it could have been one hell of an entertaining slasher flick had they gone that route with it (but then again as most of you know I am not really a fan of horror comedies). Despite its weaknesses the movie is fun and has a lot of heart, and it definitely worth checking out if you are in the mood for something a little different. Give it a try, you could do a lot worse.