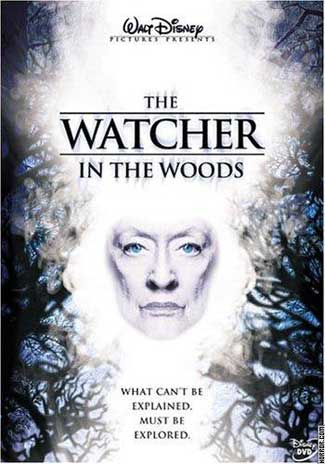 No sooner does an all-American family takes possession of a baronial English manor when all manner of peculiar things occurring, including signs that point to the disappearance of a young girl during a solar eclipse decades before. Bette Davis headlines and Lynn-Holly Johnson co-stars in this suspenseful take on haunted houses.

Hell-o, fans of Horrorland. Here is a curve ball for you. Although it is not usually the kind of films I mostly review, it’s still worthy the watch, no less. The Watcher in the Woods. In my opinion, this is the most awesome Walt Disney movie you will ever see. I think if they could re-make something and put a good, twisted spin on it, they should re-make this film for adults. Add everything that it is missing, although it still holds up as a good movie. Especially for the children, without getting camp cheese on their asses. There is no childish comic relief of any kind. As I was a child watching all of the monster, ghost and zombie movies, this one stuck out in my head as a favorite. Even though there is no violence throughout. The film is a rated PG.

Based off of the novel, A Watcher in the Woods, by Florence Engal Randall, The Watcher in the woods is the tale of a family that moves into a new home. In the film (which has an element of the novel left out of the popular version), there is a ghost of the elderly woman’s (played by Betsy Davis) daughter (named Karen Aylwood) that roams the home and woods. She is inside of the mirrors of the home, which in return, Jan cannot see her own reflection, but Karen’s instead as she calls out to Jan in a blindfold. Jan’s younger sister, Ellie gives them a playful warning upon arrival. She was right after all.

Ellie hears Karen whispering to her to make them aware of her presence. Ellie gets a puppy. When trying to think of a name, a voice whispers “Nerak.” She thanks her sister, who in return claims that she did not say a word. Ellie scrolls Nerak through the dust across the window, which is seen outside by her mother (in a mirror/The Shining effect) as “Karen.” The mother has spoken to her daughter before in a lonely sense, but now she knows that Karen has not left the home.

The Director, John Hough, also directed The Legend of Hell House, another haunt fest in the vein of The Amityville Horror. He used some of the same scare tactics in this film as in The Legend of Hell House. He has also directed three other Walt Disney films. The second draft of The Watcher in the Woods was altered as it was deemed “too dark” and was supposed to be aimed for children. Little do most know, every Disney film has its dark secrets. The gravestones and cemetery used in this film were not a set or props. It was all real in an actual cemetery. A dark film, this is indeed.

Although it is very macabre in tone, The Gore Score is a flatlined zero. This proves that one does not need a gorefest to have an effective film. The Special Effects were provided by John Richardson and he did a fine job at the goal in which he was aiming. The location was filmed at the same as Director, John Gough’s main influence, The Haunting.

Also, despite the fact that this is a Walt Disney feature, other dark treats await the kiddies as they view this film. Some which the occasional parent could have found offensive (unless they would let their children view The Omen or The Exorcist, such as my parents did). There is a scene with blasting church windows that is quite awesome in an blasphemous sort of way. A fun house is actually made to look scary in one jump scene.. Besides the “too dark” version of the script, another version was released to the press and media for a preview screening. No one seemed to like the ending (which I will not give away) or the way it looked, so the film was re-canned and re-worked. It was then re-released to the public in nineteen eighty one. I have owned this vhs since the mid nineteen eighties.. I am happy to see it finally released on DVD.

The Special Features include a commentary, two alternate endings, theatrical trailers, a television spot, a John Hough bio and a twenty page color booklet. The booklet details memories of the making of the film, a history of the story and interviews with some of the actors. An awesome package to bring back the memories of a long time Horror fan. To me (with The Legend of Sleepy Hollow at a close second place), this is the best Walt Disney movie you will ever see. With that being said, I give this film, The Watcher in the Woods, FOUR HORNS UP.

Until the next time, this was Jay. Keep one foot in the grave, one fist in the guts and your eyes out for gore. Later.