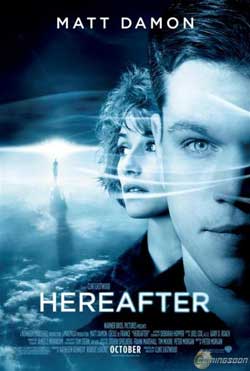 A drama centered on three people who are haunted by mortality in different ways. George (Damon) is a blue-collar American who has a special connection to the afterlife. On the other side of the world, Marie (de France), a French journalist, has a near-death experience that shakes her reality. And when Marcus (Frankie/George McLaren), a London schoolboy, loses the person closest to him, he desperately needs answers. Each on a path in search of the truth, their lives will intersect, forever changed by what they believe might-or must-exist in the hereafter.REVIEW:

While the combination of Matt Damon and a film called HereAfter might stir up action packed thoughts of maybe Jason Bourne taking on the unknown “Hereafter is quite a different beast. Some might call it slightly lethargic in its slow moving drama-filled story line. Though others will ride that motion on anticipation of a carefully weaved premise that centers on death and loss.

This film is rooted on the lives of 3 people while honed under the directing guise of legend Clint Eastwood. George Lonegan played by Matt Damon has a special connection to the after life. His past which centered around the readings of loved ones and those who have passed over has come full circle leaving him in a state that has him avoiding readings at any cost. As he puts it, his gift is a curse that keeps him from any sense of a normal life. Matt is haunted not by the visions but by others who seek his services.

Cécile De France as Marie Lelay is a charming french journalist who experiences a near death situation while covering a news story that ends in tragedy. Her experience though only fleeting seemed to leave a lasting impression on her an what she encountered. This experience has crossed over into her professional life in which she is forced to deal with  a change of perspective from those around her who have provided paths of success in her life.

Marcus (Frankie/George McLaren), is left alone after his twin brother is killed in an accidental car collision. His new life with foster parents is only a distraction to his true calling…which is to connect to his brother who has passed. While his persona is mostly silent and recluse, his eyes tell his personal pain without saying a word.

All 3 stories find a way to seek each other out in what transpires into a like connection with the after life that has profound effects on each. The film offers something to its viewing audience, but what that exactly is ….might differ in viewpoints. I think the response to this film will fall within a certain degree of let downs despite its content and talent involved. It’s not that the performances were lacking or that the theme un-interesting….its the culmination that I believe American audiences will feel a bit cheated on in resolution and  the lacking of any real energy in delivery. As an overview, it’s clear that the film is centered more on loneliness and sadness with several premise let downs connecting its overall package.

While this reveal might be a slight spoiler, I thought that Bryce Dallas Howard’s role was just left shorthanded without any real necessary connection provided. The film clocked in at a solid 2 hours but much of that was isolated scenes of Matt Damon just feeling down and sorry about himself. His usual sensitivity would have survived more if the script would have allowed for it but what resulted was just a bit too much of “ya we get it, he’s not happy about having abilities” scenario thrown at us one too many times.

Hereafter will not satisfy most film goer audience who crave that after life explanation if even through film. It only provides a subtle look behind the curtains while lacking any more than, the idea that spirits go on. Because of this and all its factors combined, I really cant recommend “Hereafter” as a must see. I’m not even sure if a rental will fit the bill. I can comment that it’s slow moving, it’s mostly sad and it perhaps showcases the affect of dying, near death or reading death that has an impact on others. Perfect no, adequate yes, essential?…not really

The box office reports most likely reflect my own views on the film. With a $50,000,000 budget, the film only pulled in $220,322 its opener weekend. The movie combines English and french dialog making it feel more like foreignmovie.

– Shipped to theaters under the title “Heaven’s Playground”.

– The outside scenes of the London Underground feature Liverpool St Station which is at the eastern edge of the City of London, with the signage digitally altered to make it appear to be Charing Cross. Charing Cross actually has only one above-ground entrance to the tube network, on Trafalgar Square just across from Nelson’s Column