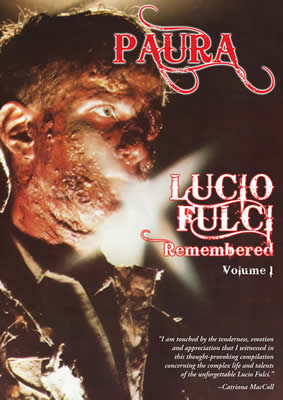 The life & times of the “Godfather of Gore” as seen through the eyes of his colleagues & peers.

Wikiepedia lists Legend Fulci with the following description: Lucio Fulci (June 17, 1927 – March 13, 1996) was an Italian film director, screenwriter, and actor. He is perhaps best known for his directorial work on Gore films, including Zombi 2 (1979) and The Beyond (1981), although he made films in genres as diverse as giallo, western, and comedy.

Upon looking into the man more closely, he has an impressive body of horror film work that scrolls for page after page. In fact, I found this link which spells it out more clearly.

I can say honestly the films of his I have seen have always been creepy, horrific and unique. Though with so many films to his name it would take me quite some time to both locate and view his complete bodies of work. I came into this DVD with hopes of being able to expose myself better to this exact film body.

Remembering Fulci is an obvious labor of love filled with tons of commentataries from peers, film acquaintances and family members who knew Fulci quite well. The DVD is split into 3 sections which are collaborators, actors and peers. Upon watching it I was expecting something that was more of a documentary covering his film work and showing clips of his body of horror offerings., Sadly though this is not that kind of tribute. Much of the coverage is directors and producers of the Italian film industry talking about the man and how they knew him. With over 4 hours of material it can weigh pretty heavy not being shown much to back to the stories.

The film is presented more as if you were sitting down and listening to the variety of peers speak about the nan over coffee. With the film being called Vol1 I would hope that volume 2 was more into into he style of a documentary to be able to absorb his unique collection of work. I could almost see this DVD as a bonus of extras rather than a feature itself to accompany a 2 pack.

I recommend this DVD only to die hard fans of the man himself, but if you are looking for visuals and horror movie segues you will be disappointed. Still it is a nice addition to a horror buff collection which can be purchased directly at this link