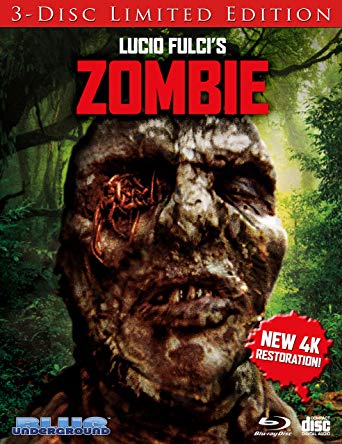 After a New York harbor patrolman is murdered at the hands of a flesh-hungry ghoul aboard an abandoned yacht, Anne (Tisa Farrow) — the daughter of the ship’s missing owner — teams with a newspaper reporter (Ian McCulloch) for a private investigation. Clues eventually lead them to a Caribbean island where the dead refuse to stay dead. A voodoo curse is at work, and battle with the bloodthirsty zombies must be joined.

Oh Italy, you’ve given us such great things, and Italian horror is one of my favorite exports. Of course, Italian horror movies have a tendency to be rather hit or miss in most cases and it takes a certain kind of horror fan to appreciate some of the films that have come out over the years from Italy. 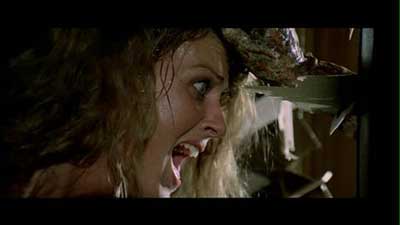 1978 gave us George Romero’s undisputed masterpiece “Dawn of the Dead” which, when it was shown in Europe, went by the name “Zombi” or “Zombie” depending on the country. Lucio Fulci, an Italian horror director and the man behind films like “House by the Cemetery” and “The Beyond” in 1979 decided to cash in on the success of “Dawn of the Dead” by directing his own zombie film entitled “Zombi 2” or simply “Zombie” as it is sometimes known here in the states.

The film starts out in New York as a sail boat drifting near the New York harbor is investigated by the harbor patrol. The vessel is abandoned, but one of the unlucky harbor patrol men meets his demise at the hands of a big fat zombie who takes a big fat bite out of his neck. 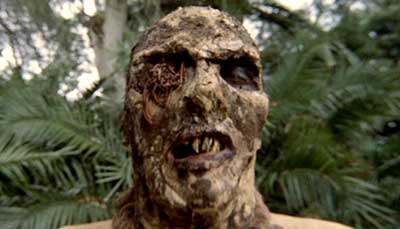 Reporter Peter West is put on the assignment to find out what really happened on the boat, and meets with the boat owner’s daughter, Anne Bowles. Ms. Bowles hasn’t heard from her father in some time and is worried that something may have happened to him on the tropical island where he had been researching.

Peter’s editor takes care of the tickets and the pair is off in search of the story and Anne’s father.

They find help from a couple with a boat who offer to take them to the island of Matool where Anne’s father was working with a Dr. Menard, who is trying to figure out what is causing the island locals to come back from the dead. The Dr.’s wife Paola lives on the island in a cottage, but is terrified of zombie attacks and wants to leave the island as quickly as possible. 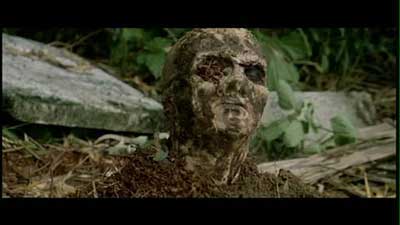 What’s causing the zombie outbreak on Matool? Does Anne find her father? What the f*ck do conquistadors have to do with this f*cking story!

This movie’s title was obviously a cash in, but trying to compare “Dawn of the Dead” with “Zombie” is like comparing a 747 to a paper plane. Yes they both fly, and they both have wings, but that’s where the comparisons end. Now I’m not saying that “Zombie” is a bad film because it’s not, but it does verge on the ridiculous on more than one occasion. And yet despite every bit of this movie that makes me scratch my head and ask “What the f*ck?” I can’t help but howl with laughter at another part that seemingly makes no sense but is awesome none the less.

A perfect example of a moment that doesn’t really add to the story at all is the zombie vs. shark scene. There’s no reason for a shark to be fighting with a zombie, but by god Fulci gives it to us in all of its under water glory. The scene is silly but it’s one of those moments that runs from stupid to hilariously awesome so fast that you really don’t have time to process that the idea of a shark fighting a zombie is ludicrous and has no purpose.

The same goes for when 400 year old conquistador zombies suddenly rise from their graves for no real reason. The only explanation really given for the zombie outbreak is voodoo, but that doesn’t explain why the damn conquistadors are now shuffling about! Again, it’s a silly scenario, but it’s just so god damn awesome that you’re willing to forgive the leap in logic for the sake of a good laugh.

And of course, I can’t leave out the one scene that every horror fan has heard about, (which if you haven’t seen if for yourself, I’m sure can be found on Youtube or somewhere else on the internet) yes the famous eye gouge scene. Admittedly, this film has some of the worst pacing that I’ve ever seen, with long gaps of scenes that serve no real purpose other than to allow the actors a chance to spout dialogue. And when the eye gouge scene comes, it’s at such a monotonous part of the film that it really jolts you. 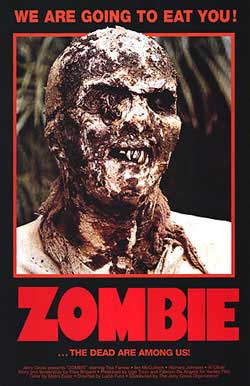 If you’ve never heard of this scene, let me explain. A woman has her eye gouged out on a piece of wood. Sure that doesn’t sound that impressive considering what we’ve seen in the “Saw” films and “Hostel” but this was 1979! And it’s such a slow, painful lead up to the actual act that you end up holding your breath through most of the scene wondering if you’ll actually see the splinter enter her eye. And yes you do, and yes it’s as awesome as you think it is.

The make up team for this movie really knocked this movie out of the park, between the zombies who have a nice dirty and decayed look to them, to the bloody mess that the zombies make when they feast or when someone finally shoots them in the head. 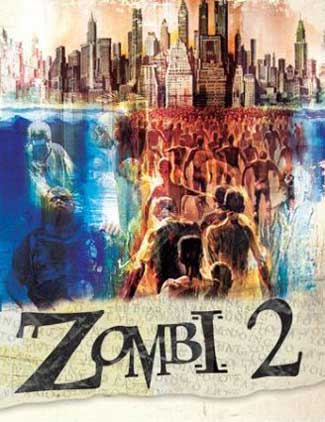 This movie is gory and I’d say it takes the violence of “Dawn of the Dead” and ramps it up a few notches. The blood is that great bright 1970’s blood, but it’s not quite the Technicolor splatter seen in other films of the decade.

To wrap this madness up, “Zombi 2” or “Zombie” whichever way you prefer, is a bloody good time filled with hilarious nonsense that somehow manages to form a semi-coherent zombie story with bare breasts and two scenes that every horror fan who’s worth their salt will squeal with delight at the mere mention of.