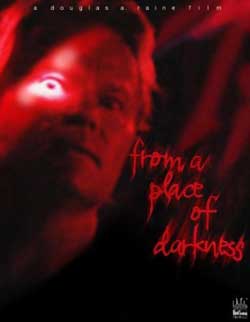 Miles Kody is a struggling film maker who only wants the best for him and his wife Brenda. Miles has recently regained his passion for film making by meeting a very strange man named Vic. Vic makes snuff films, an excellent subject to make a documentary on. Miles begins to notice however that there is something else going on when he watches his tapes, he swears that he is picking up images of ghosts and they are trying to communicate.

Douglas A. Raine’s From a Place of Darkness definitely had me fooled; the opening sequence depicts a man being bound to a chair while a woman begins to have sex with him. During their love making she begins to bite him, not in a love nibble either, the woman is tearing away pieces of the guys flesh who struggles helplessly in the chair. The woman continues to chew away pieces of the man while grinding on him until she finally gets off of him. Another figure creeps up behind her and soon she too is slaughtered, all in front of a camera. Here we go I thought another look into the seedy world of “snuff films”. Though Douglas A. Raine does give us a glimpse into this vile world, his story takes a completely different direction rather quickly. Though From a Place of Darkness is marred by a low budget, and the acting skills of the cast is rather questionable the film still does maintain to deliver some genuine scares and an atmosphere that is just as creepy as the title of the movie.

The main plot line of the film centers on the young film maker Miles Kody, a former award winning film maker. Miles has a brother named Sean who is with the young Rosa, while the four of them are having dinner Rosa announces that she is pregnant, Sean of course seems excited while Miles seems anything but. Miles of course wants the same kind of life for him and Brenda but he cannot afford it at the moment so he looks for a way for him to achieve that goal.

Miles searches and eventually finds a man named Vic, Vic makes snuff films and isn’t afraid to discuss the taboo subject on camera for a documentary that Miles is filming. During the interview Vic comes across as cold and unfeeling, he describes this coldness as how one has to be when they are in the business of snuff films; you can’t let human life mean anything to you. Of course during this part in the film I was thinking, great here we go again. Suddenly during the interview Vic asks Miles if he would like to see the room where the last film took place. Miles agrees and as he walks towards the room he suddenly catches a glimpse of something on his screen, something that makes him temporarily jump out of his skin.

Miles decides to set up shop and enlist his brother and the two women to help him out. Of course going into production requires meeting with his head investor a seedy little troll of a man named Carl, but that comes later, first they have to set up shop. While setting up all the equipment Brenda in a moment of nosiness decides to watch some of the interview Miles conducted with Vic. She is terrified of the footage she sees because she feels as if Vic is talking to her, not to Miles, and definitely not to the camera.

The footage unnerves her so when Rosa steps in and asks her if she wants to go out for drinks (I thought she was pregnant?!) Brenda says yes and the two girls leave. Sean is hanging up lights when suddenly he hears a strange sound, he goes to investigate and suddenly he is burned by something in the air. He rushes to find Miles to tell him what he has discovered, but Miles is far from surprised or unnerved. When Sean shows Miles the wound inflicted upon him, Miles pulls up his pant leg and shows Sean the wound that was inflicted on him as well. Miles then proceeds to tell Sean about the ghosts that seem to be appearing on all of his tapes, he even shows Sean some of these tapes. One of the tapes shows a very beautiful and scan’tily clad female named Jacqui who just like in the tape Brenda saw earlier seems to be reaching out for the viewer.

When Miles takes the tapes to Carl so that he can get funding he shows him the footage of Jacqui. Carl being the dirty minded fool that he is obviously becomes intrigued by the footage on the screen. He is so into the footage that nothing else seems to matter as Miles describes the project to him. Eventually Miles closes the screen so that he can have Carl’s undivided attention as he talks through the negotiations to get the project going.

The last forty five minutes of the film are of course built up now as everyone involved meets up at the abandoned warehouse where Vic does his dirty work. I wont reveal what happens, as it will ruin the surprise you are sure to get when watching it, I will however state that while inside the darkness of the warehouse the six people all become victims or murders themselves only to end the entire film on a rather dark note, something I was pleased to see with all of the happy endings that seem to have invaded the horror genre.
Douglas A. Raine’s From a Place of Darkness looks exactly like the title suggest most of the scenes take place in the dark with very limited light. The scenes are almost claustrophobic and certainly add to the atmosphere. The warehouse itself almost becomes a separate character all together during the last forty five minutes of the film, mainly because of the strange graffiti and the scared ghost that seems to be spraying it on the walls.

The special FX on From a Place of Darkness are also well put together, dealing with the subject of snuff films there are of course several scenes of people being killed. Some of the people are cut, the guy in the credits was chewed to death, one person is shot, one person is impaled, and several people are beaten to death (one with a camera still on its tripod to which Mr. Raine gives us a lovely beatcam shot). Since most of the film takes place inside of the dark warehouse the FX crew really didn’t have to work too hard to make the ghastly images come across as realistic. The camera work also is very well done for such a low budget. The only real flaws I saw with From a Place of Darkness were the female supporting cast members acting abilities (though they do look good on camera), and the direction style was almost a little too much like television during several parts of the film. Other than that once From a Place of Darkness grabs a hold of you it won’t let go until its finally dark ending. I definitely recommend the film to fans of ghost movies that are looking for something a little more dark and twisted. 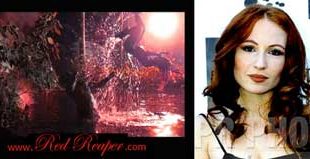 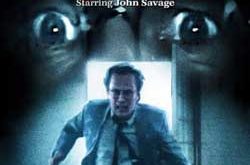