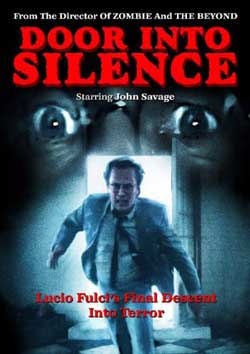 After leaving his father’s funeral, businessman Melvin Devereaux (John Savage) sets off on a long drive home through the Louisiana back roads. Along the way, he finds himself ensnared in a horrifying labyrinth of absolute terror. Released in 1991, this psychological thriller is the last film written and directed by Lucio Fulci, the notorious B-movie legend known as the “Godfather of Gore.” Sandi Schultz co-stars.

When I found out that “Door into Silence” was the last film of famed Italian horror director Lucio Fulci, I was all a flutter. I’m a uber fan of Italian horror films, some of the standouts being Fulci contributions. The memories of sheer bliss from such films as “Zombi 2”, “The Beyond”, “House by the Cemetery”, and “City of the Living Dead”. As a matter of fact, I just watched “Cat in the Brain” a month ago. Even though it’s a glorified murder highlight reel complied from Fulci’s lesser films, I still like it on a visceral superficial level. Saying that, I’m also aware that Fulci has put out some absolute duds.

And I’m sad to say “Door into Silence” is one of them. Not good/bad, like so bad that it’s kind of enjoyable, you know train wreck television. It’s bad/bad, like I was valiantly fighting sleep to stay up and finish it. It’s so bad, honestly dear readers, I’m having a hard time coming up with anything positive to say about it. It’s got a ninety minute running time, so your not made to suffer on extended period of time. Maybe being a fan of the previously named movies, I could have set my expectations too high(but I didn’t). So yeah… that’s about it. 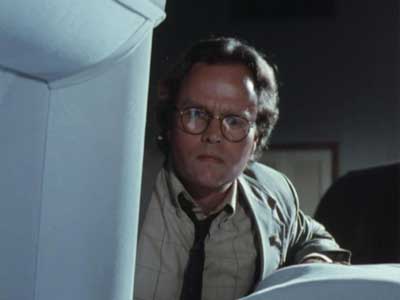 Okay, it’s not my style to bag on a film unless it’s criminally bad and is obvious that no time or effort was involved. I actually respect the difficulty and hardship of directing and creating a cinematic experience. So I’ll try not to give it the Bathory treatment. But understand I say this with a sad heart. Now, where to start? How about the acting. This is essentially a one character play with John Savage carrying the bulk of the work load. Unfortunately, his performance comes off stiff and lifeless. I’m sure the goal was to go with a lucid feel to play along with the dreamlike tone of the movie. But at the end of the day comes off uninspired and uninterested. The few bit players miss the mark on both ends of the spectrum, from wooden to over the top and completely in contrast to the atmosphere of the film. And let’s talk about the atmosphere of the film. 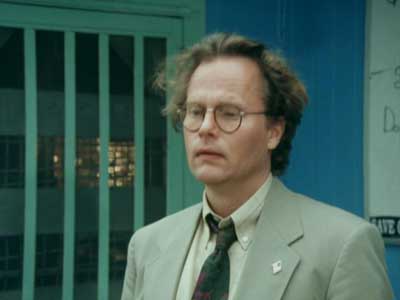 It’s baffling to me that the same director that so brilliantly use New Orleans as a creepy and surreal backdrop in “The Beyond”, drops the ball here. The peak of the cinematography is a long shot of a freeway. Let’s not forget the handling of a couple “alleged” chase scenes. Fulci basically just speeds up the reel to create an action set piece that are at best laughable. Another error is the terribly repetitive pacing. Savage is driving in his car, he spots a hearse, he engages the hearse in a chase, Savage’s car breaks down or is suddenly cut off, he gets out and has an awkward interaction, and gets back in his car. Rinse and repeat. I’m all for the theory of “If it ain’t broke, don’t fix it”. Hell, some major careers have been made from it (cough, cough, AC/DC, cough, cough. Kidding, I heart Australian schoolboy. Huh, what?) But here it didn’t work the first time and it gets progressively worse time after time. 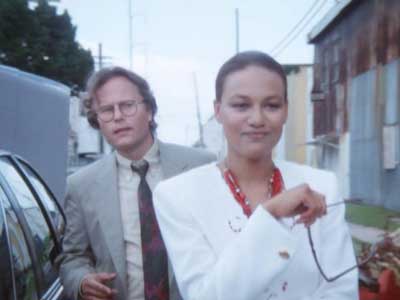 The major crime of the film is it’s plain and simple boredom. I’m not casting this dispersion based on Fulci’s previous work. It’s not just no zombies, no blood, and no gore. But, also no suspense or any real drama. All of the issues I’ve stated could have been null and void if this film had some sort of energy. Too much of this film takes place in Savage’s car as he’s just driving, there is zero enjoyment watching John Savage driving and staring down the road. Plus the twist ending, it’s made so abundantly clear, especially if you’ve seen a movie in the past 50 years, how this is going to turn out. Alright, I’ve bashed this film enough, the bottom line is I cannot in good conscious recommend this movie. 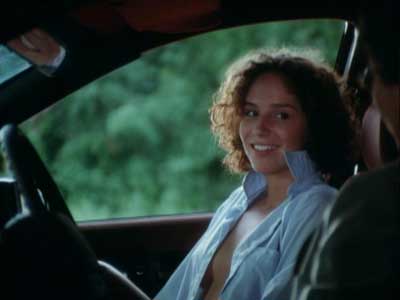 If your a Fulci fan don’t bother, you have a number of quality films from the man so why waste your time with this. The same applies if you have never seen a Fluci film, it will sour you on the director completely and really why introduce yourself to his lesser work. It would be like someone telling me they had never seen a Spielberg movie and the first film I tell them to see is “A.I”. Needles to say I didn’t like this film, but I still have love for Fulci. Plus everyone is entitle to the occasional stumble. Now, I’m gonna take a shower and wash the shame off me like a call girl after a rough night hitting the streets.