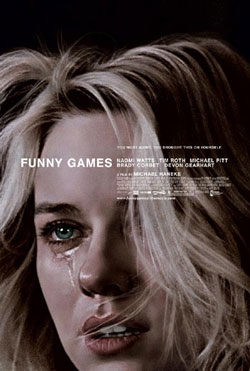 Anna (Naomi Watts) and George (Tim Roth) are enjoying a vacation with their son when a pair of sadistic young men, Paul (Michael Pitt) and Peter (Brady Corbet), breaks into their cabin and holds the family hostage. The psychotic duo plays twisted games with their prisoners, forcing them to comply to stay alive. Director Michael Haneke remakes his chilling 1997 German-language film as an indictment of the media’s fascination with violence.

So I bought this movie as a import way back when it first came out in 1998. At that time it was a German import in which I was forced to read subtitles. That portion isn’t so bad, except listening to German accents for too long can get to you. Moving forward, I liked it then and I like it now. But fair warning, this movie is really not for everyone! Why I say that, is it’s pretty much unrelenting in it’s violence and compassion for human nature. There are no hollywood endings or restraint on taboos in this film. One would question why it was even made?

Now lets jump ahead to 2007. We have a remake. Though it’s really not a remake. It’s the exact same movie with american actors (familiar faces) and no annoying German speak to read thru.

In this version we have famed actors Naomi Watts, Tim Roth with Michael Pitt and Brady Corbet. 95% of the movie is focused on these 4 individuals.

Now to sum up things. A family goes to there summer house to relax. Anna, Tim and there son Georgie upon arriving are greeted by 2 young boys Paul and Peter. Paul and Peter are 2 obvious rich brats who shortly after stop by to borrow some eggs. Although they maintain manners and a pleasant demeanor something is noticeably wrong. The simple request escalates up into a situation where they refuse to leave after being asked to do so. As any person would react, the situation quickly turns from being annoying to downright violent with Tim losing his cool and starting everything in motion.

After which the 2 boys hold the family hostage and perform a series of mind games on them to pass the time. What becomes apparent is these 2 boys have found a way to pass the time by terrorizing their neighbors. Incredibly, they insist on being polite about it and at the same time seem to hold no compassion for their acts. I won’t spoil the rest but the journey is a very dark one that questions the moral of human nature. To say the least, the 4 actors show tremendous effort in there abilities to make it all believable and even painful to watch. One is fore-warned as your feeling after wards will leave an empty spot in your stomach that won’t go away easily.

The director Michael Haneke has his own style. Let’s get that on table from the get go. I loved his style, many might feel a bit unnerved at it. But it works, and it works for the story. We get camera shots that linger on way to long. We get shots that show portions of the violence to let the mind create the rest. We get cuts that waver and move in different ways than we are used to seeing. This is his genius. This is also what makes this film unsettling.

So what is it that makes this film special to our time? For one its the overwhelming fascination by the consumer and medias with more violence being shown on screen. Let’s face it, this film probably wouldn’t have gotten picked up 10 years ago. It’s too much for a viewer to consume and take home with them. Now its pretty much becoming a new standard. Which is the dark endings that leave you thinking. We saw another example of this in the recent “Strangers”. Now I’m not complaining as it’s good for business here at the site, but as one person said….what, do we all just need a hug?

So in the end, can you say that this is a successful filmmaking achievement? I say it’s a good piece of icon filmmaking for our present times, and nothing more. You won’t gain anything by watching but you will start to wonder about where this is all going. Recommended only for die hard violence fans.