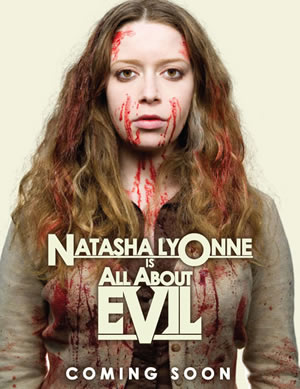 Deborah (Natashia Lyonne) was raised to be in show business by her over-enthusiastic, loving but naive father. Never amounting to much, she grows to become a shy librarian instead; however, things take a grisly turn when her father leaves her his old movie house, the Victoria, after his passing. When threatened by her step-mother, Deborah snaps and releases the killer inside. With the help of her misguided projectionist, Deborah turns the security footage of the murder into a celebrated short feature gaining a legion of local fans. The events escalate as she seeks out like-minded deviants to join her twisted cinematic crusade. 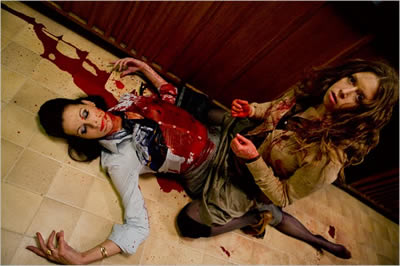 One of the biggest surprises of the 13th Annual Nevermore Film Festival in Durham, NC was Joshua Grannell’s horror comedy All About Evil where it took home their first Audience Award for the weekend. The film was met with applause and laughter and was the highlight of the festival. After an awkward start where a young Deborah performs on stage with disastrous results, All About Evil quickly develops into a riotous, satiric horror flick destined to become a cult classic. About mid-way through, it settles into a successful rhythm of mayhem and madness feeling very much like a cross between Pink Flamingos and Frank Henenlotter. It’s a fantastic, boisterous experience full of rich, zany characters and creative set pieces. 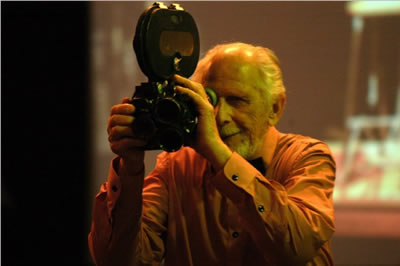 All About Evil is full of recognizable character actors, both fresh and seasoned. Natashia Lyonne headlines the cast as Deborah Tennis. At first her performance and her character appear to be a hot mess and a total disaster until the story and direction begin to take shape, after which it becomes clear very quickly how nuanced and satirical her role really is. By the time she dons classic Hollywood film attire and starts spouting clever spins on typical cliches, the first few missteps are completely forgotten and the persona she is developing becomes fully realized. Deborah is a fragile, unhinged, delusional train wreck. At her side, is her projectionist, Mr. Twigs played by Jack Donner from Buffy the Vampire Slayer and Star Trek. He nearly steals the show and injects the story full of demented glee as soon as he becomes involved. Deborah also hires a few fellow cohorts to create her short film masterpieces who also have a flair for disposing of actors who “die” on stage. Noah Segan from Deadgirl plays Adrian who is sinister, sick and sleezy and funny as hell. His is a grungified Patrick Bateman variation of Riff Raff and it works perfectly. Rounding out Deborah’s band of misfits are Jade and Nikita Ramsey as Veda and Vera, a pair of homicidal twins. This eclectic set of bizarre characters breath life into the film and the actors are perfectly cast into their roles. 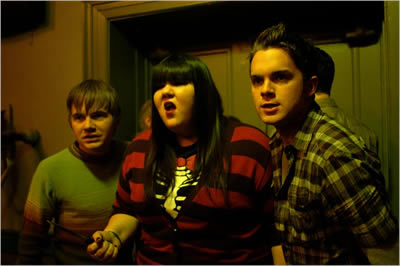 Opposite Lyonne’s Deborah is Thomas Dekker as Steven, a teen movie buff and common patron of the Victoria. Dekker is becoming a familiar face in modern horror films playing John Conner on Terminator: The Sarah Conners Chronicles and appearing in films like Laid To Rest ( 2009) and the A Nightmare on Elm Street (2010) remake. He doesn’t bring much to the role and plays it very straight being upstaged by better actors surrounding him. Although, the understated performance suits the film providing a counterbalance to all the exaggerated, over-the-top performances provided by Lyonne and crew. Cassandra Peterson (better known as Elvira) plays Steven’s mother and anchors the “normal” part of the script. She is exceptional, as is Ariel Hart who plays Steven’s shy girl friend who unwittingly uncovers the truth behind Deborah’s success and becomes their final target. Cult actress Mink Stole plays Deborah’s librarian co-worker and famous San Fransisco drag queen Peaches Christ (an alter ego for director Joshua Grannell) makes an extended cameo as a local film critic and new found Deborah Tennis fan. The entire cast gel together nicely and create an exceptional, memorable ensemble, especially during the second half where the film kicks into high gear. 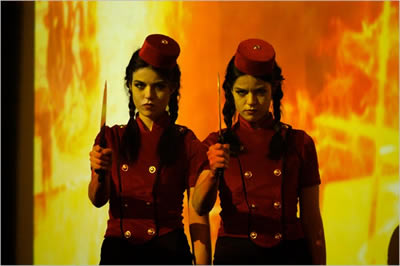 Director Joshua Grannell has a professed love for horror films, especially the more b-movie or campy they are and that love envelopes every frame of his film. He also brings a midnight movie sensibility to the movie as well and infuses the script with a bizarre set of disturbed and disturbing characters. The satirical script focuses on these characters providing the cast with witty and energetic dialog. The gore and effects are sparse but incredibly effective with a fair share of gruesome moments and deliciously morbid site gags. All About Evil is the perfect festival film where the entire audience is primed for the experience and share the director’s passion for the genre and his delivery of that genre. The script has fun with the kills and wraps them within goofy and inspired Deborah Tennis films and titles. Great stuff. All About Evil is a fun movie sure to put a smile on your face and tickle your horror-bone. 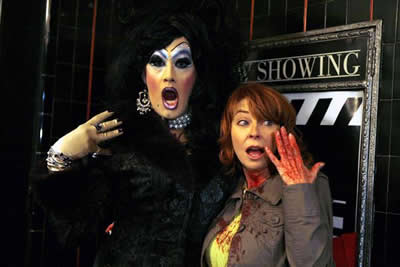 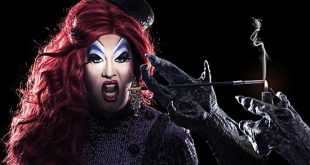