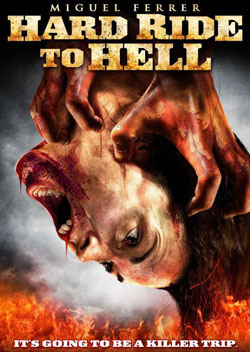 A group of family and friends on a camping trip through the Texas badlands are taken on a one-way ride to Hell after they inadvertently witness a ritual sacrifice at a deserted campsite. Pursed by the devil worshiping biker gang responsible, they hole up in an abandoned church near the border, only to discover that they are pawns in a decades-old battle between good and evil.

QUICK FIX:
A group of family and friends travel through Texas in an RV on their way down to help out with Habitat for Humanity. Everyone seems to have their own issues – especially Danny and Tessa, who are trying to deal with the heartache of having just lost their baby. But when a simple night of camping in an abandoned RV park in the middle of nowhere leads to the group stumbling across a gang of Satanic bikers looking for just the right chick to impregnate in order to birth the Anti-Christ so they can bring about eternal darkness on our world…well…I think you see where this is going. Mucho blood-gushing and boob-exposing ensues, as well as road chases and confrontations and screaming, all leading to yet another final battle for Good vs. EEEEE-vil in an old church in a long-deserted ghost town. And as we all know by now, there can be only one…

RAMBLINGS:
I have a pretty good suspicion that I’m in the minority here (and why should I have it any other way?), but anytime that I see something that reminds me of RACE WITH THE DEVIL, it gets my attention in a big way. I love that movie more than Brick Tamblin loves lamp. And even though we all know by now how much I truly loathe with every fiber of my being the way that Hollyweird has been on the remake train for the last few years while ignoring the talented indie filmmakers (yes, myself included) and their original ideas, if there is one flick that I think could be updated for a new generation with a bigger budget and better FX and a little more of an expanded storyline, that would be RACE WITH THE DEVIL, and I would be all for it. Hell, I’d even volunteer to write that one myself.

Granted, I don’t want you to get the wrong idea here – HARD RIDE TO HELL is not, by any means, a remake of or trying to cash in on RWTD – but the filmmakers did obviously take some of the storyline and make it their own, and I don’t hate them for that – in fact, I applaud them. There’s a great story in there that goes back decades and the way it all culminates in modern times in the final showdown is pretty damned well done. Plus, they put their own little spin on immortality and what the vampirish demons have to do to stay that way that I really dug into, and it left me wanting to know more and see more – always a great sign.

Acting-wise, Ferrer is once again at home playing the Big Bad, and really looks like he’s having the time of his life here. Unfortunately for me though, the ever-hot and talented Isabelle (GINGER SNAPS, of course) had one of the most underdeveloped and annoying characters in the flick, not to mention that I’ve seen in quite some time, which was more than a bit of a letdown. I won’t hold it against her though, and she did the best she could with what she had to work with. Brent Stait though….damn. This guy steals the show as a traveling knife salesman who also happens to know how to use them to slice things other than tomatoes or nails, if you get my drift. He made the role his and chewed up more scenery than I’ve seen since Michael Gross first portrayed the iconic Burt Gummer some 20 years ago.

LAST WORDS:
With a little more money in the budget and another polish or two on the script, this could have easily been one of my favorite movies so far this year. As it stands now though, I’m still not complaining at all. With equal parts RACE WITH THE DEVIL and ROSEMARY’S BABY (and call me crazy, but I could swear there was more than one nod to WARLOCK: THE ARMAGEDDON thrown in there) making for a great story, Ferrer in top form, Isabelle looking her hot self as always, and a nice little spin on the “keeping your immortality by feasting on humans” story, there’s more than enough here for genre fans to get their geek on with, and I highly recommend you take the HARD RIDE TO HELL as soon as possible!