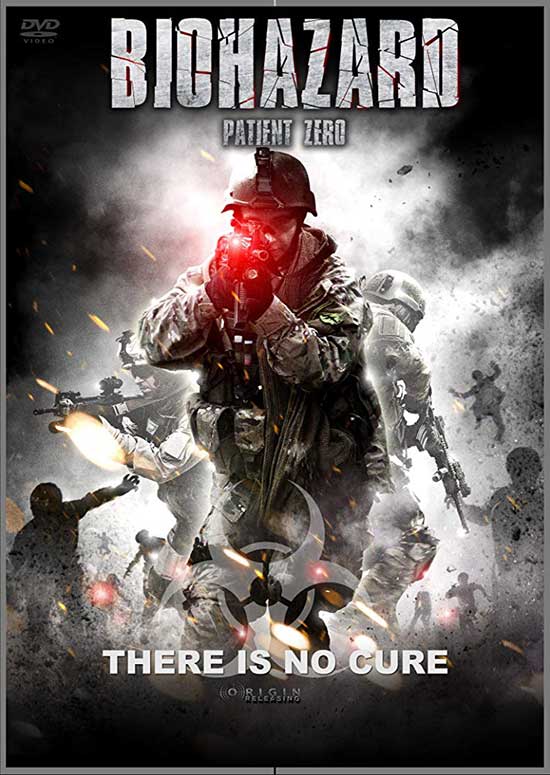 Two young scientists are swept up in a government plot to suppress the truth about a biological disaster at a genetic research facility.

The distributor, Hannover House, has been marketing Patient Zero as a prequel to Humans vs. Zombies (also directed by Brian T. Jaynes), and although I haven’t seen the original film, I found Patient Zero a thoroughly enjoyable viewing experience. It had very slick visuals and storyline, coupled with brilliant acting from all cast members. What a winning combination!

The premise for this film basically revolves around a scientific agricultural facility and the secret nature of the work that is being done there. The boss, Jonathan Wright, keeps up this deception even with his fiancée, Jenna Barnes, who also works there, and happens to be hiding a secret of her own. When there’s an issue of contamination and the laboratory ends up being put on lockdown, Jonathan comes clean, informing her that they were building a genetically modified virus which causes severely aggressive behaviour. Bearing this in mind, both Jonathan and Jenna now have the tricky task of escaping the building, encountering homicidal workers as well as a strict military task force intent on killing all survivors, along the way. 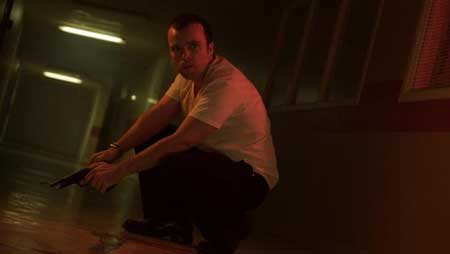 Similarities can be drawn between Patient Zero and The Crazies (originally directed by George Romero and then remade by Breck Eisner), with the use of a secret government plot to construct biological weapons. Just as in The Crazies, Patient Zero also portrays the military as ruthless killers who shoot first and ask questions later and perhaps this is somewhat of a statement about the level of trust that people have today with authority figures, particularly the government. Even the ‘virus’ itself seems remarkably similar in each film, reducing the victims pretty much into ‘zombies’, or what most people would ‘zombies’, but through a scientific experiment as opposed to rising from the dead. Following on from this thought, I think there are also similarities with the Spanish handheld horror film REC (with characters stuck in lockdown, having to contend with a contagious virus) and even Resident Evil (with a somewhat secretive ‘research facility’ which also involves a dangerous virus).

Whilst it’s apparent that Patient Zero doesn’t really have any originality, this is not necessarily a death sentence for it. A lot, if not most, horror movies aren’t original – especially with the recent Hollywood trend of remakes and sequels galore, so I won’t judge this film too harshly on this front. The plot was littered with clichés, but all of the elements worked together well and I don’t blame the director for playing it safe. There was a good blend of action and horror elements, and so, even though I wouldn’t say that the film was very scary, the viewer is still given plenty of fights and gunshots to keep entertained throughout. For those who are of a squeamish disposition, just a tiny smattering of blood is used for this film (surprisingly, given that it is pretty much a zombie film). 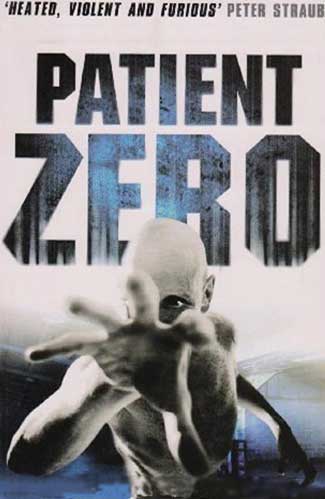 I loved the cinematography in Patient Zero, in particular the use of soft focus worked very effectively. The whole film had a very spectacular, ‘cinematic’ feel to it, what with the ‘letterboxed’ formatting, as well as the mixture of the intensity and drama of the close up facial shots and the ominous, uneasy feelings that the static long shots provided. The editing was very frenzied and fast-paced which I really enjoyed as it always kept me engaged and gripped throughout, eyes fixed to the screen for fear that I’ll miss something. Modern audiences tend to prefer quick, snappy shots and so Patient Zero definitely caters to that, successfully too. The music was also something which nicely complimented the action. It never appeared too jarring and it was used well to add to the creepy atmosphere and the sense of foreboding in many of the tense scenes. 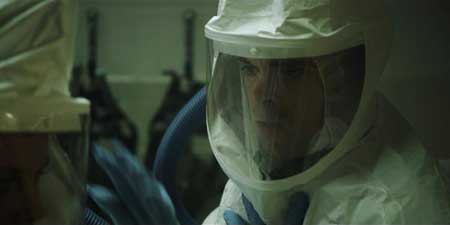 The ‘zombies’ in Patient Zero were not all that frightening, to be honest, and just appeared to be people in white suits shuffling about aimlessly (which kind of contradicts the whole ‘ultra-aggressive’ personality alteration that’s supposed to have taken place). Yeah, they growled and occasionally tried to attack people, but for me, as a hardened horror fan, I felt that more action and more ass-kicking (on the zombies’ part) would have given it an extra ‘wow’ factor. Perhaps also, the film could have done with being a bit longer, as it was only just over an hour long! I wanted more! Take that as a compliment for sure. However, I did respect the fact that obviously a lot of time and effort went into making the locations look authentic, which can’t have been an easy process – how many people even know what an agricultural laboratory should look like and what protocols they have?

Patient Zero had its world premiere at the Splatterfest Film Festival and has continued to get praised ever since. Though it did not have the luxury of a theatrical release, Patient Zero is now being sold at Walmart – something which director, Brian T. Jaynes seems to be quite proud of judging by the film’s Facebook page (there’s a whole range of photos featuring each member of the cast holding a copy in the store, proud looks on their faces). It’s always good to have different avenues of getting your films out there (something which is especially difficult for independent film directors), and I really think that Brian T. Jaynes deserves some recognition for his superb efforts within the horror film industry. Congratulations sir, and I very much look forward to your future works.