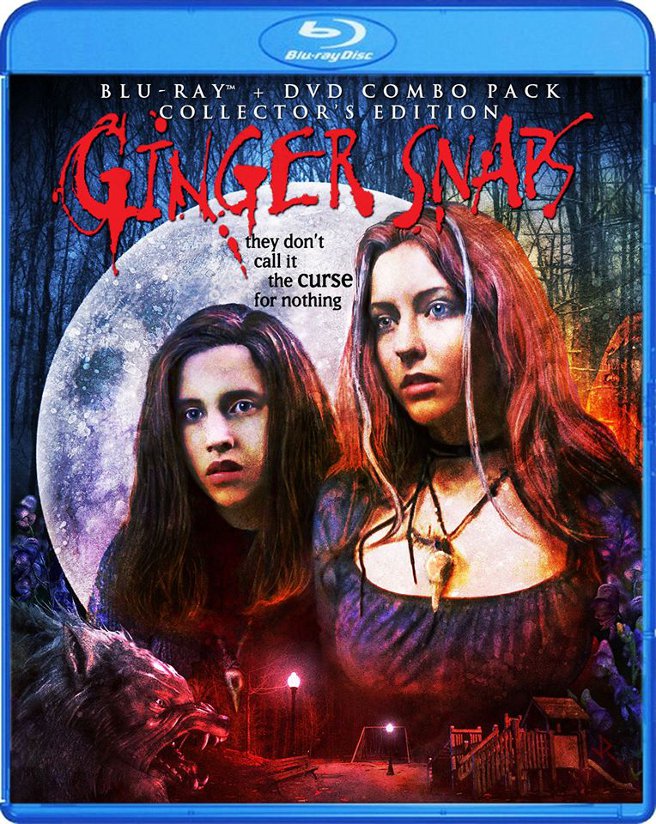 One of the Fitzgerald sisters, suburban goth girl outcasts, gets bitten by something in the woods (and it ain’t a neighborhood dog).

What do lycanthropy & menstruation have in common? An odd question for sure but as presented in the film “Ginger Snaps”, the answer is pretty damn scary. It’s been a dog’s age (Pun unintended) since I’ve seen this flick and I forgot how great it is. The plot tells the story of sisters Brigitte (Emily Perkins) & Ginger (Katharine Isabelle), who are incredibly close and incredibly ostracized by pretty much everyone except their parents. Both of them are decidedly goth looking and they enjoy spending their free time taking morbid pictures depicting scenes of death, usually featuring Ginger as the victim. As the film opens we see some of these pictures as the credits roll, the girls turned in a series of their pictures for a class project that their teacher doesn’t appreciate too much. 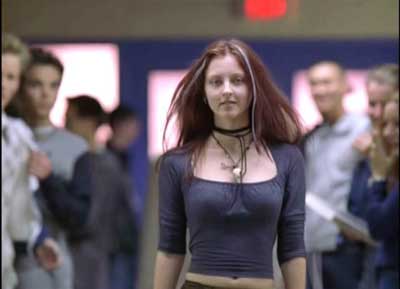 The two of them have an obsession with death & have a suicide pact together as well. Neither one of them want to reach adulthood and their mantra is “Out by sixteen or dead at the scene, but together forever”. It’s immediately evident that these two are not your standard, cookie cut teenagers that you might find in similar films. Both Brigitte and Ginger are incredibly deep and intelligent characters that could carry the movie on their own but together they give the film an immediate gravitas. Perkins & Isabelle play off of each other extremely well and the script (By Karen Walton) is relatively devoid of humor so the performances stay on point throughout the film. What little humor is here is black…extremely black and never detracts from the overall air of gloom that permeates every frame of this movie.

Neither one of the girls have experienced their first menstrual period yet and on the day when Ginger’s finally arrives, she’s also attacked by a werewolf. We’re never told exactly where the werewolf comes from it’s identity either. It attacks Ginger as both she and Brigitte are on the way home and it is a fairly savage attack as well, director John Fawcett’s camera doesn’t shy away from showing us some serious bloodshed. As the creature attempts to make it’s escape it’s hit by a van driven by Sam (Kris Lemche), the local doper who eventually ends up helping Brigitte when Ginger starts to act oddly. Of course “Oddly” means she’s slowly becoming feral and sexually voracious. The wounds that the attack left her with not only begin to heal almost immediately but start to sprout coarse hair as well. She also sprouts a set of fangs (That no one besides Brigitte seems to notice) and a nifty little tail that she has to tape to her leg to keep it from popping out from whatever she’s wearing. Ginger also begins to feel a bloodlust that nothing seems to satisfy, nothing besides blood from something or someone anyway.

It becomes clear to Brigitte that her sister has indeed been attacked by a werewolf and since Ginger’s first menstrual period came on the same day of the attack, which took place under a full moon, the next full moon will not only bring on her next menstrual cycle but her next full transformation into a werewolf and she frantically tries to find a cure for her before it’s too late. In the meanwhile Ginger is slowly growing accustomed to the changes she’s going through and beginning to enjoy them. She even goes as far as to infect a popular jock, Jason (Jesse Moss), with the curse of lycanthropy during sex in the backseat of a car in one of the film’s few humorous scenes. 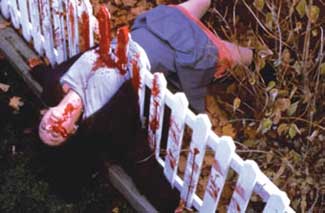 The film is successful not only because of it’s script which really nails what high school is like for those kids who are perennially on the outside looking in but because it’s also a very effective horror film. There are some genuine scares to be found here amidst all of the teen angst and Katharine Isabelle is stunningly effective as Ginger’s personality slowly changes, she even gets the whole lupine walk down just right. She changes into a feral, man eating predator and never once is she anything less than believable. The relationship that Ginger shares with Brigitte also feels right. Isabelle and Perkins are spot on perfect and the script never makes them look or act stupid, they’re just….different. The two of them are very natural with their line readings and react to each other in a way that doesn’t feel forced, as if they were sisters in real life.

Now as much as I love this film it’s not perfect. Although the two leads are excellent I had a problem with their appearance. While Brigitte looks dowdy, plain and nerdy, Ginger doesn’t. As a matter of fact if not for her wardrobe Ginger would be pretty hot stuff. There is a scene where she begins to embrace the changes she’s going through as she enters the school. As she begins to walk down a hallway full of teens that have always shunned her, she starts to (For lack of a better word) strut past everyone with a knowing grin on her face. Her hair frames her face just right as her hips sway left to right and she knows she’s the focus of everyone’s attention, the “Alpha Female” so to speak. I just didn’t buy the fact that the two of them were sisters, their appearances are so dissimilar. I also didn’t understand why no one comments on Ginger’s teeth as they slowly turn into fangs, no one seems to notice or care and she sure isn’t trying to hide them. 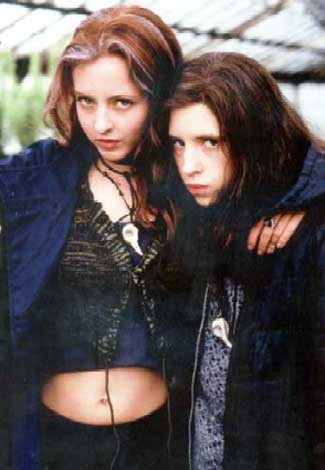 I also thought that the actual werewolf seen in the film looked a little rubbery & immobile. Luckily we rarely see it in it’s entirety so it’s more a case of me nit picking. Mimi Rogers gives a good performance as Pamela, the girls mother but is it just me nit picking again or do her eyes seem to be bulging out of her head everytime I see her in a film? It’s very distracting and when the script calls on her to actually bulge her eyes out for whatever reason….look out! Those peepers take up the entire screen!!

But what’s good, no great about this film? Everything else! “Ginger Snaps” wants to compare lycanthropy to puberty. One of the more effective tag lines for the film is “They don’t call it the curse for nothing” and I see the point but I think it’s more about the loss of ones adolescence. Ginger & Brigitte are dreading the day their period comes for a reason. It’s the portent to womanhood and both of them are aghast at the thought of being adults, hence their suicide pact. The fear of the responsibility that comes with being an adult is one kids don’t face until puberty smacks them dead in the face and they all react differently to it. Ginger ends up becoming a werewolf and ends up enjoying the fact that she doesn’t have to become an adult, she can just eat them! I for one cannot claim to know what women feel monthly when their “Friend” arrives but I have a wife & 2 daughters and I have first hand experience of how they change and it ain’t pretty acolytes. When the full moon finally arrives and Brigitte has the “Cure’ for what’s ailing her sister there’s still a doubt as to whether she’ll be able to administer it since Isabelle is a full blown werewolf at this point. The tension is palpable during these scenes and the blood is all over the place. In one heartbreaking scene Brigitte even tries to ingest blood to be like her sister and to stay true to their vow to be “Together Forever”. I was so emotionally invested in the duo at this point that I nearly shed a tear watching this scene & the finale which I won’t get into here. Suffice it to say that it ends perfectly if tragically. And on that note I should mention the score by Mike Shields which has a dirge like quality to it that fits the proceedings to a tee. 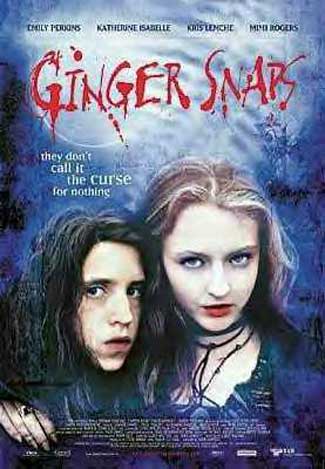 “Ginger Snaps” was produced in Canada and was successful enough there to warrant two sequels. Sadly, it got a straight to DVD release here in the states and while it has become a cult favorite it hasn’t been the true success it should be. Those of us who have seen it know that it is not only a great film about the struggles of being a teen that doesn’t fit in but it’s one of (If not the) best werewolf films ever made. Yeah, yeah I know there are those of you who are screaming “What about “An American Werewolf In London” or “The Howling”? Those are two great films as well but have you actually seen “Ginger Snaps” yet? If not, then shut up and find it. If you have and you still disagree with me…well you’re just dumb then. Do yourself a big favor and see “Ginger Snaps”, then tell your friends to see it as well. Four and a half out of five shrouds from the Black Saint for “Ginger Snaps”, one of the smartest, scariest & most heartfelt horror films you will ever see.

Gingersnaps is a “must see” horror film with plenty of Gothic overtones and werewolf flash. The film is now available on bluray from the restoration masters Shout Factory. Lots of BTS and extras you wont want to miss!