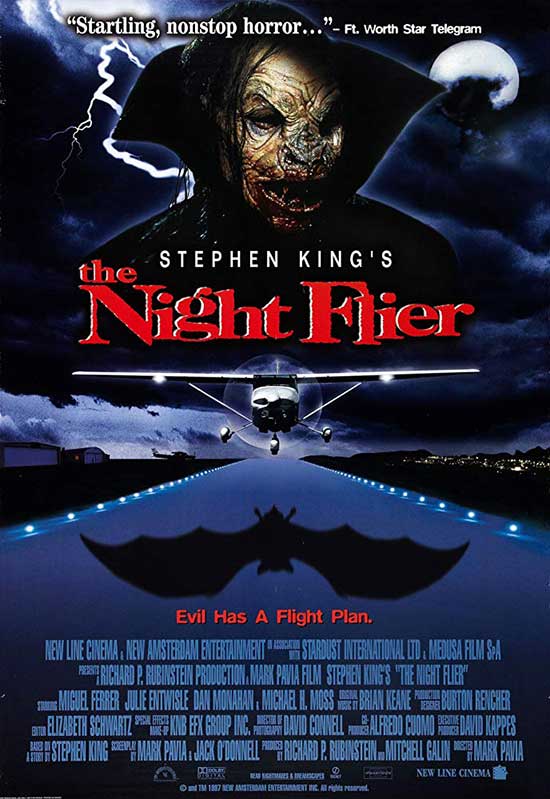 A reporter is on the trail of a vampiric murderer who travels by plane.

Miguel Ferrer is one of those actors who gives a good performance even if the material he is working with stinks on ice. He tended to play angry, jaded types, both good guys and bad guys. You want someone who needs to stand firm even if he might be wrong, put Miguel in the role.

Sadly, he is no longer with us, but he starred in everything from comedy and drama to horror and even science fiction (“Project: ALF” qualifies, right?).  One role that has introduced him to many horror fans is Richard Dees, the driven tabloid reporter from “The Night Flier”, based on the short story of the same name by Stephen King. 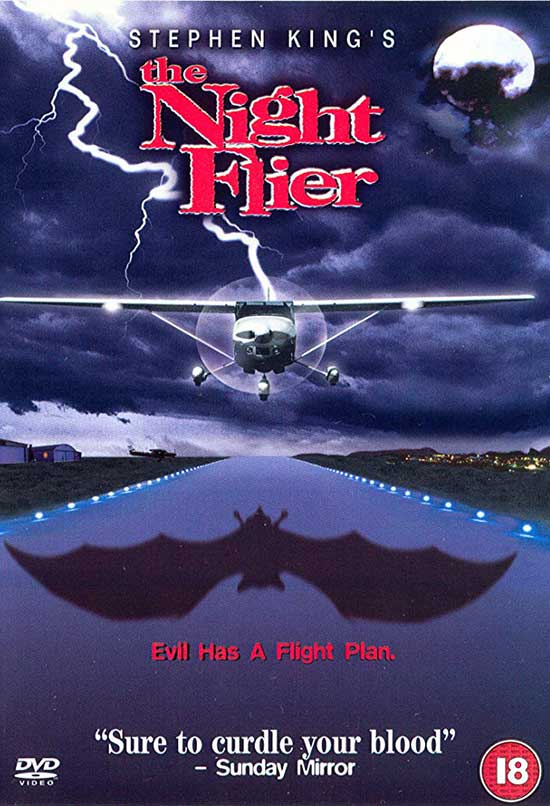 Richard Dees is a lizard in reporter’s clothing working for the Inside View tabloid. His years of tracking, stalking, and writing stories about the worst humanity has to offer have seeped into his skin. His ability to keep himself apart from that trash he reports is failing. He is tired, depressed, and lacks basic human empathy. In fact, he has a rather dim view of humanity and himself, to be honest. 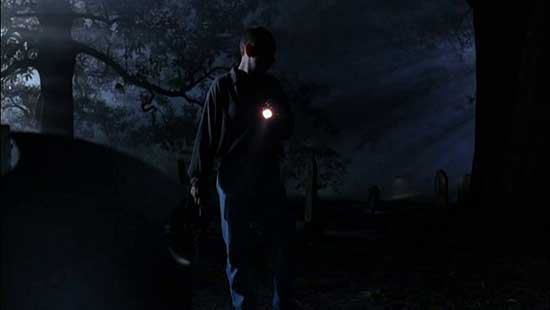 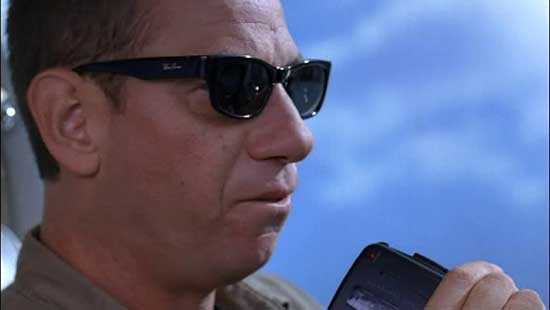 When a sudden rash of odd murders begin occurring at small airfields in the American Northeast by a shadowy character who goes by Dwight Renfield, Richard turns the story down at first, figuring the whole thing to be little more than a waste of time and sure that the authorities will wrap the case before he could get started on research.

Instead of trusting Richard’s dismissive take, the tabloid’s editor-In-chief, Merton Morrison, gives the story to Katherine Blair, a new reporter. In just a few hours, Katherine has pulled police reports, cross-referenced them, and discovered more details just as a report of a new attack reaches the newswire.

Katherine attempts to be friendly with Richard, but he dismisses her as a “Jimmy Olsen” – a newbie who is overeager and too trusting for the tabloid racket. After crushing her emotionally, Richard is informed of Katherine’s progress on the story and of the new murders by the editor-in-chief. He offers the story to Richard again. Smelling a story that might put him back on the cover as “godfather of tabloid gore”, Rich agrees, snaking the story from Katherine, who is understandably pissed off. Dees ignores her dismay. 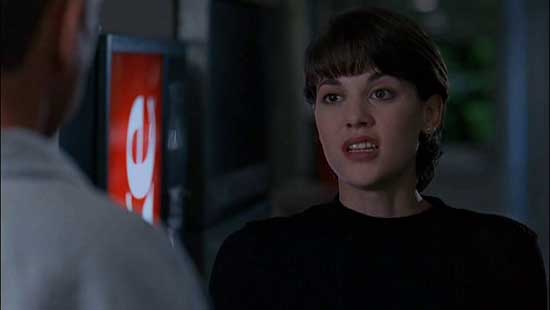 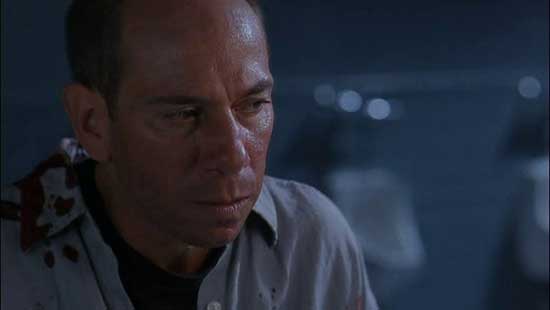 Richard throws himself into the story to the point that he desecrates the grave of one of the victims for “dramatic” purposes while taking a photo. Soon, he is drawing close to his prey. So close that the “Night Flier”, as Richard has dubbed the killer, warns him off the story. Richard, sensing the greatest story of his career, refuses to step back.

“The Night Flier” was made for theatrical release, but, due to various factors, the film debuted on HBO before hitting theaters a year later. It made little money in theaters. In the intervening years, the film has developed a bit of a cult following. The unusual framing of the story and the unique monster design most likely helped with that following.

One element that stands out about the film is the massive amount of practical makeup effects done by the incredible artists at KNB EFX. Face lacerations, huge throat wounds, severed limbs, and bodies torn asunder are just a few of the graphic images scattered throughout the film. Happily, the camera isn’t shy about showing the gore, and the makeup stands up to the extended viewing time, unlike work done by lesser effects crews. 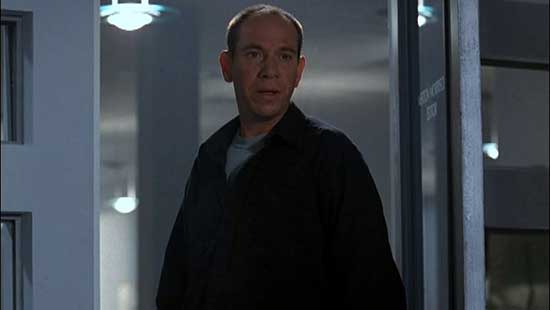 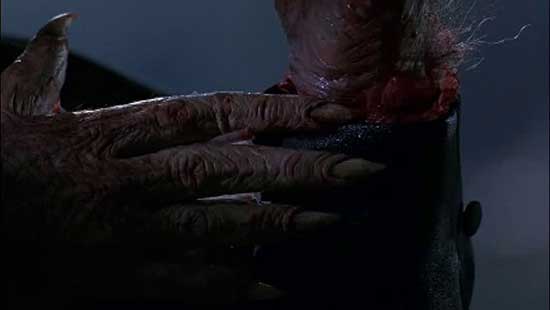 The film exudes a nice creepiness when it focuses on the vampiric killer and his effect on his victims. One pleasantly chilling scene features an older woman in a peignoir set casually waiting on the steps of her home as the killer attacks and feeds on her husband. Then she goes inside and welcomes the monster into the bedroom. Scenes like this have a wonderful dream-like quality that give the film a much-needed shot in the arm when Miguel Ferrer is not onscreen. 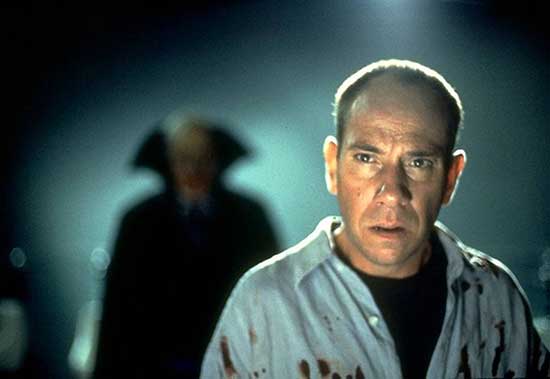 Unfortunately, the creepy elements feel like they belong in a completely different film. The whole vampire who flies by Cessna Skymaster concept is wild enough to sustain its own film. That storyline gets short-sheeted by the time and attention given to the moral downfall of Richard Dees. Both ideas deserve equal representation as it is hinted that Dwight Renfield’s transition into a bloodsucker is representative of Richard’s transition into different kind of vampire – one who feeds on the pain and tragedy of others. The film does not have enough running time to do justice to both, so neither story arc is as complete as it should be. 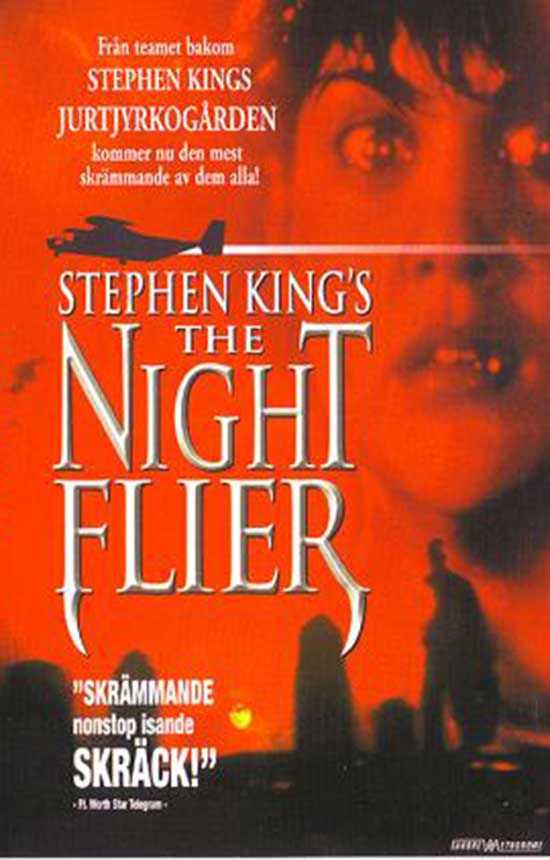 The other big issue the film suffers from is Julie Entwistle. She is attractive, and she does her best. Paired with Miguel Ferrer, her very basic acting skills put her in an even dimmer light than if she had been teamed with a lesser actor. Her character is being groomed by the editor-in-chief to be as efficient and calculating as Dees, while the threat of her taking the story pushes Richard to persue the vampire story with renewed vigor. Her role is little more than a plot device; a better actress would have been wasted, and poor Ms. Entwistle becomes a simple prop used when and where the film needs someone to contrast with Richard.

In the end, “The Night Flier” is an interesting film worth a look for Miguel Ferrer’s portrayal of the slimy Richard Dees and for the scenes that feel like an homage to Val Lewton’s ability to capture an eerie mood with only lighting and actor placement. Beyond that, the film fails to fully develop either the killer’s or Dees’ story into a tale that fully satisfies.