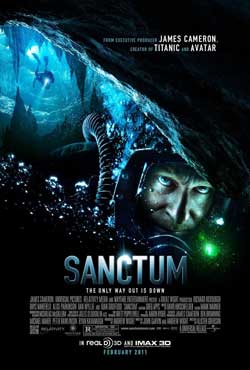 The 3-D action-thriller Sanctum follows a team of underwater cave divers on a treacherous expedition to the largest, most beautiful and least accessible cave system on Earth. When a tropical storm forces them deep into the caverns, they must fight raging water, deadly terrain and creeping panic as they search for an unknown escape route to the sea. Master diver Frank McGuire has explored the South Pacific’s Esa-ala Caves for months. But when his exit is cut off in a flash flood, Frank’s team-including 17-year-old son Josh and financier Carl Hurley are forced to radically alter plans. With dwindling supplies, the crew must navigate an underwater labyrinth to make it out. Soon, they are confronted with the unavoidable question: Can they survive, or will they be trapped forever?

Right on the tail of the huge budget Avatar, James Cameron surprises us with a film that is focused around a cave. It isn’t directed by Cameron, though that usually isn’t a reason not to check out his produced work. A Cameron film is something you take the time to digest to watch front to back. The film did have a bit of that “grandiose” treatment as it starts on an almost Jurassic-like intro flying into great safari land to come upon the ultimate earth hole. A cave that no one has ever cracked. This cave literally looks like the earths anus but promises a solid 90 minute of adventure time. Now right away you’ll want to know what kind of film this , and I ave to say….take a helping of “The Abyss” and mix it up with “Descent (without the vampires or monsters) and you’ll have a great idea of what’s to come.

Frank McGuire (Richard Roxburgh) is our wealthy cave-loving extremist who has spent more time in under the earth than with his own family. Rhys Wakefield plays the role of Josh his protege-but-troubled son who seems to fight more with dad than respect him. We get the sense that Frank is pretty well off to fiance such a huge project expedition and that his league of supporters are all at the mercy of a good paycheck and a promise of some adventure time. Like most of these films, the scene is lush, rich and beautiful. It’s the added element of “something has gone wrong” that really messes up things for the team. In this case its the arrival of an early storm which makes for a ton of water coming the big hole in the earth while the team is busy trying to crack the next cavern. As you guessed it, the team has to push forward, avoid being drowned and excavate there way into unknown territory. Each crew member adds his or her own dynamic, but as you can also guess its a huge evolving body count situation that the treachery of a deep cave exploration brings.

This dynamic has a bit of that Poseidon, got-to-get-to-the-surface feel which we have come to know thru several derived film presentations.  A father\son relationship forms from a troubled one that needs some band-aiding and we find that under stressful situations, stressful things happen that usually end in death. Ioan Gruffudd takes on the role of Carl who becomes very unlikable as more screen time stacks up. This role might throw off viewers who have come to know him thru his Fantastic Four Reed Richards persona. Though my impression was, Carl is the token antagonist who makes things more difficult than they “have” to be.

I don’t think this is going to be a Cameron award winner, which doesn’t say that it’s still not a good film. I just felt that the film took the easy route of “been there and done that” approach that we have seen in several other movies. In short, we are not really seeing much new here. The formula feels cookie cutter at times and doesn’t really bring any visual dynamics that introduce any new situations. The strength of “Sanctum” is in the drama and the sense of loss and sacrifice. It also makes you believe that you are there for the ride with some real nail-biting tension that keeps you alive and kicking with baited breath. “Sanctum provides a layout of thrills for viewers that work. Though those who were expecting something more original in the Avatar vein will be disappointed. Others may just call this a flop and move on to the next expectation, it’s hard to tell. A good way to approach this is, if you liked “The Abyss”, you should be ok with “Sanctum”

The movie was filmed in Australia and was  based on the Cheve/Chaco/etc expeditions in the Yucatan. It was also bases on a true story of 14 people who went in a cave for 2 days and had to find another way out when their entrance collapses. The cave itself was primarily a Warner Brothers studio set that was combined with some impressive opener cgi to build the illusion of a huge open hole in the ground.