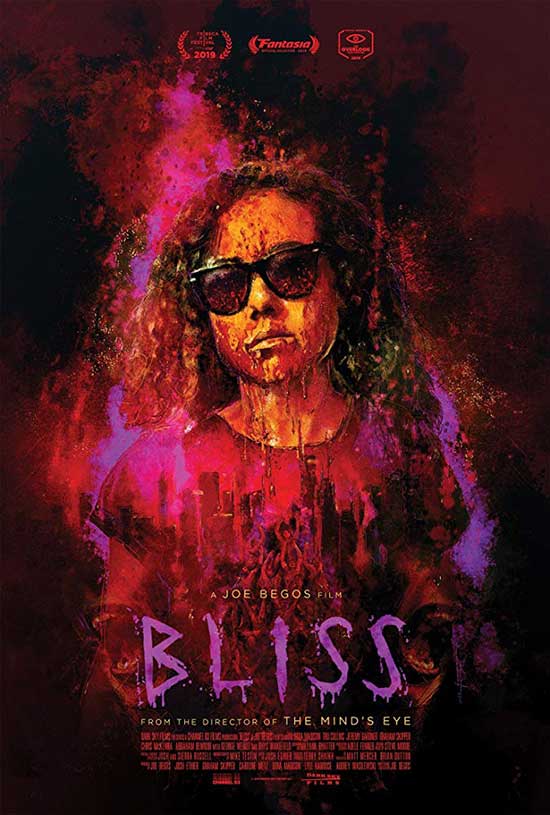 A brilliant painter facing the worst creative block of her life turns to anything she can to complete her masterpiece, spiraling into a hallucinatory hellscape of drugs, sex, and murder in the sleazy underbelly of Los Angeles.

I love a good vampire movie. Vampires have always brought out our darkest fears and desires in some of the greatest horror films ever. There have been several iterations of the vampire lore explored in film throughout the years, each with different rules and meanings behind the cause of vampirism. But one thing is always consistent in each film, the vampire’s hunger and need for human blood.  Bliss is the latest film from genre director Joe Begos which takes the idea of vampires consuming blood to a whole new level of visceral horror. In his film, the vampire is presented as a dangerous and violent addict willing to do anything for their next fix, and the drug is human blood.

The film follows L.A based artist Dezzy (Dora Madison) who is experiencing a terrible  creative block. She is behind in her bills and no matter what she does, she can’t finish a painting. So like other artists before her, she turns to drugs for inspiration. Dezzy is hooked up with a new drug called bliss by her party friend Courtney (Tru Collins) and her entire world goes spiraling out of control. Once Dezzy uses the bliss her mind descends on an acid trip journey where time loses all meaning and her inhibitions are unleashed and unchained. She can continue her work and her senses are supercharged to the max, but with these new experiences comes a terrible side effect. She has an unquenchable and intense thirst for blood and experiences the pain of withdrawal until the thirst is satisfied.

This film is a wild ride, an intense and bloody drug trip fueled by a punk rock soundtrack. That left me entertained and stunned beyond belief. What I love most about the film is how Begos uses vampire mythology to tell a story of the horrors of drugs and addiction. In this film, vampires are wild, pleasure-seeking addicts, that destroy everything in their path to satisfy their thirst. Dora Madison gives a stellar performance as Dezzy. She conveys so much in just her physicality and demeanor of someone who is dealing with something beyond her control.

Jeremy Gardner Once she starts becoming a vampire she is unnerved and scared by her situation, but she is also enjoying herself. She likes the power and the euphoria that comes from drinking blood, and the more blood she consumes, the more of her painting she completes. The power of vampirism mirrors drug addiction. At first, Dezzy feels powerful, focused and euphoric, but the next day she crashes and feels the pain of withdrawal. And the audience is along for the entire ride as Dezzy descents into bloodlust and madness.

Bliss is beautifully shot and gives off an almost noir punk rock feel to it. I especially loved the use of color lighting throughout the film. In scenes where Dezzy is just chilling out with Courtney and her other friends, the lighting is a mellow blue or green. When things are getting crazy and the bliss is causing hallucinations the lighting is all over the place and feels like a strobe light at a rave.

Especially when blood is involved the lighting is red, but a very nasty red to capture the horror of the moment. Begos also really captures the look and feel of the seedy underbelly of the Los Angeles drug scene, that progresses throughout the film. As Dezzy uses more bliss and craves more blood, the nastier the location becomes mirroring the downward spiral of an addict. The same can be said for the soundtrack. The film has a killer punk rock soundtrack featuring songs by The Nymphs, Electric Wizard and Doomriders. The soundtrack is part of Dezzy’s story and captures her personality throughout the film. Fast, hard chaotic and liberating.

Bliss is a hard-hitting horror film. It is an acid trip of a horror film filled with great performances and powerful imagery. This film won’t work for everyone as it is very deep, very weird and bloody as hell. I think Begos knocked it out of the park on this one by tapping into the vampire as a metaphor for the horrors of addiction. It also does what I most appreciate in a vampire film by showing the horrors of vampirism but also the power that comes with it. It’s also so refreshing to see an original vampire film that manages to break new ground on the lore while also adhering to what made the genre so popular. Bliss is currently streaming exclusively on Shudder and available to rent on VOD.