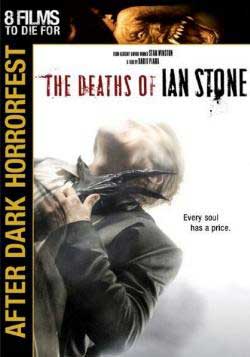 In this byzantine psychological thriller directed by Dario Piana, working stiff Ian Stone (Mike Vogel) finds himself trapped in a bizarre reality: Every day he dies a horrific death at the hands of a killer, only to be resurrected and murdered again. Can Ian get to the bottom of the mystery and break the recurring cycle of death and rebirth? Christina Cole, Michael Feast and Jaime Murray also star.

I have never enjoyed hockey. To utter these words is nearly akin to a felony in Michigan, where you can’t swing a dead kitty in the winter without hitting a body of frozen water bearing a flock of toothless rednecks on skates who would then proceed to swat the feline corpse around the ice with barbaric sticks. It is rather daunting not to get caught up in the excitement of the game when viewed live, but that can be said for nearly any sport, with an exception being golf. Don’t even get me started on golf.

Witnessed from beyond the fourth wall on a screen of any dimensions, hockey becomes as excruciating as an episode of “The Real Housewives of Who Gives a Sh*?” At the opening credits, “The Deaths of Ian Stone” lost points with a lackluster hockey sequence detailing the final supposedly exciting moments of a match. Luckily, the film’s connection with the sport ends there, as titular protagonist Ian (Mike Vogel) blows a last second goal attempt and his collegiate team suffers defeat at his hands. Depressed and lamenting how he hadn’t felt “quite right” all day, he gives his sweetheart Jenny (Christina Cole) a ride home before coming across a man lying prone in the road. As Ian attempts to call for help, the man transforms into a large creature and drags our young star to his untimely death compliments of an oncoming train. 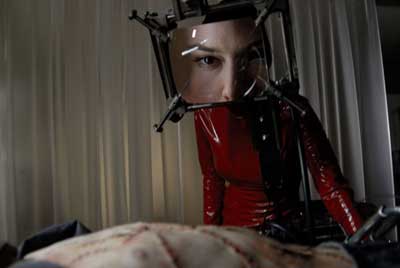 Ian suddenly jolts awake in a sanitary office setting, hinting that the prior events may have been no more than a particularly vivid nightmare. Jenny is no longer a lover but his colleague, and it isn’t long after before this current reality is shattered as Ian is violently murdered by his live-in girlfriend Medea (Jaime Murray), who is also one of the shape-shifting monsters. However, not before he is approached in an alley by the dishevelled Gray, portrayed by English character actor Michael Feast. He informs Ian that the “Harvesters” are coming for him each time a clock stops, and he will be resurrected only to repeat the cycle should they succeed in their abstruse objective. 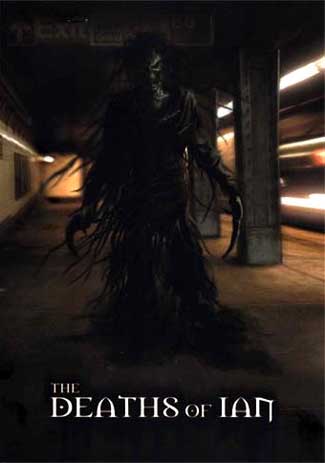 Confused yet? I certainly was, an indication that “Deaths” had succeeded brilliantly in the first third of its run time. It was a most intriguing puzzle, one that kept me anxious to discover where director Dario Piana and writer Brendan Hood would take this bewildering premise. Who were the Harvesters, and what did they want with Ian? What made him special, unlike the number of victims whose life forces the demons drain in their relentless pursuit of him? Why was Jenny a constant player in differing roles within each of his lives? At what point in this film did Jaime Murray begin blatantly mirroring Elizabeth Hurley’s performance in the “Bedazzled” remake without my noticing? 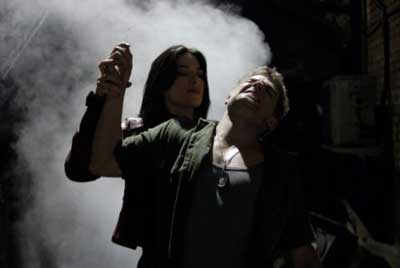 One of the eight offerings from the After Dark Horrorfest of 2007, “Deaths” eventually answers all of these pressing questions (excluding the Murray query, which was rhetorical anyway) as Ian becomes more aware of his unique situation with each existence lived. Unfortunately, the entire affair grows sillier as truths are revealed, serving as mere lip service to a special effects-laded battle to the death betwixt good and evil that, exciting as it is, does a supreme disservice to the intricate and thoughtful proceedings. The most irksome aspect is that the movie feels everything must be spelled out overtly to its audience, as if the public consists of thick children incapable of interpretation. I realize I’d just described 98% of the planet’s population with that statement, but I was insulted nonetheless. Plus, each meticulously unveiled point is explained by the omnipresent Gray, which leads one to wonder why he hadn’t confided all of this to Ian at the onset and saved them both several lifetimes of pain of suffering. As my old man used to reply when one of his brood would chime in with such ponderings, “Because then there wouldn’t be a movie. Now shut up and pass the popcorn.” 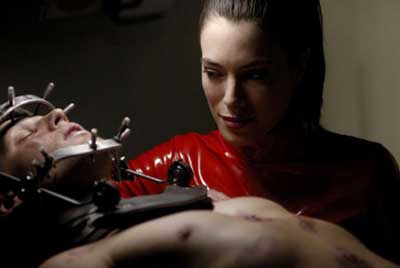 Piana, who started as many have shooting music videos (later directing the portfolio-soiling “Lost Boys: Legacy” in 2010), balances action and quiet moments with an expert precision. The Harevesters, resembling the offspring of a “Harry Potter” Dementor and one of the Ringwraiths from “Lord of the Rings,” are both beautiful and frightening, brutal yet strangely ethereal. The blend of computer and practical effects is nearly seamless, no small feat on a tight allowance. The effects were handled by none other than Stan Winston Studios, and Stan the Man (only I’m allowed to call him that) himself served as one of the producers. In all technical aspects, “Deaths” is an absolute delight. The fault lies in Hood’s script, and his dependence upon outside film influences when backed into a professional corner. Everything about the final act, down to the completely inapropos “Matrix” costumes Medea and her crew don for the equally incongruous torture scenes, feels lifted from better material. In his defense, this stuff is Shakespeare compared to the incoherent scribblings that resulted in 2002’s stinker “They.” 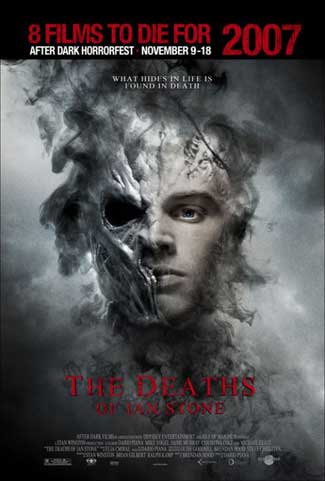 Though no real character development is required on the part of any singular cast member, all perform well with what they have to work with. I still maintain Murray could have been kept on a shorter artistic leash once Madea shows her true colors, but at least she’s having a good time. Vogel is a likable enough lead, despite a few of the more dramatic passages stretching his talent’s reach, and Cole makes for a sympathetic Jenny. If I wasn’t busy scratching my head at the increasingly wonky revelations, I would be pulling for these two plucky kids. 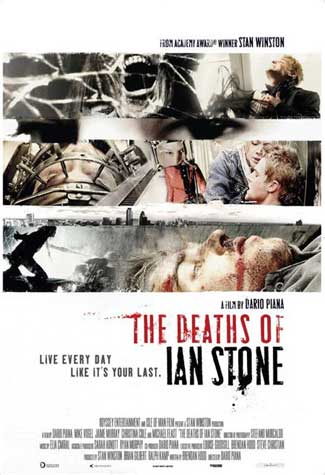 A slang term has cropped up in recent years that is most likely the auditory equivalent of a cat’s death screams as it is being used as a makeshift hockey puck to anyone who isn’t a proud American slacker. It is a product of our infamous need to bastardize two words into one for the sake of brevity and individuality, and one I find myself utilizing more often than I would care to confess. The word is “a’ight,” the hell spawn of “all” and “right.” An ugly contraction indeed, but fitting in summing up my personal feelings for “The Deaths of Ian Stone.” Far from a great motion picture, but not without its praiseworthy merits. It’s just a’ight.