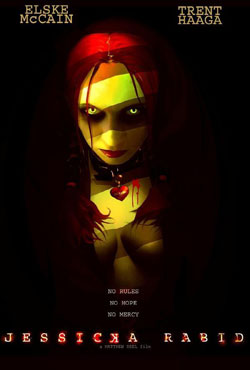 A dysfunctional family, the Hoffman’s have been living their lives in a veil of secrecy. Incest, rape are a part of their every day lives. A product of which, is Jessicka. After years of nameless abuse of her family and neighbors, Jessicka has been reduced to something less than human. She’s more of a family pet than she is a true member of the family. Jessicka is the tragic character brought up from her surroundings, and suddenly finds her opportunity for revenge.

The horror genre has been witness to its fair share of dysfunctional family units. From the Sawyer family in the Texas Chainsaw Massacre to Otis, Baby, and the rest of the Devil’s Rejects kindred, horror has given its audience a stern reminder that regardless of how difficult your family is, there can exist an even worse one.

The subject of dysfunctional families in horror must of course differentiate between its two popular manifestations. These would be an internal conflict between family members and those of whole families banded against external conflicts and interference. In regard to internal conflicts or expressions of domestic abuse, horror cinema has given its dysfunction hungry viewers brother against sister, husband against wife, and parent versus child within numerous classic films. Films such as Halloween, The Shining, and the Omen each illustrate the variables of domestic violence.

The example of whole families acting as a single murderous organism of course may be classified as dysfunctional even if it lacks specific examples of internal conflict or domestic abuse against specific family members. In terms of a whole family against the world so to speak, the Sawyer family and Rob Zombie characters sum up the quintessential dysfunctional family. That is until Matthew Reel and Elske McCain unleashed the Hoffman family unto the world of cinematic horror with their film Jessicka Rabid.

The issue of domestic violence within the horror film is not something often analyzed beyond the comical interplay of the characters and bloodshed surrounding them. Beneath the plot of these films yet exists a subject matter that effects a large number of individuals and families within the United States. In reality, the statistics of domestic violence varies per culture and geography and global estimates give 5.3 million women being abused each year. Within the United States alone, 25% of women experience some degree of abuse within a spousal or familial manner. Such numbers of course only example reported cases of abuse. It is a safe assumption that unreported case numbers would eclipse those of official records.

Despite the critics claims otherwise, domestic violence, as with all violence in horror for that matter, is not a glorification of its occurrence. Whether Oscar Wilde was correct in his assumption that life imitates art, not art of life, violence in film still may be a shadowy cinematic reflection of the dark collective of the human psyche. Jessicka Rabid is a film that through its celluloid mechanisms exemplifies an extreme, yet all too real example of the toxic relationships within certain strata of the American household. Spousal, sibling, and child abuse lurk rampant within the secret corners of an alleged civilized sociological culture. Jessicka Rabid captures this reality with a disturbing accuracy. The Hoffman family, composed of Marley, Brad, Abbey, and Jessicka, illustrate many of the social taboos that an unstable consanguinity may cross.

Jessicka is a young girl facing the struggles of a brain disorder that impairs social interaction, verbal and non-verbal communication, and breeds a fertile ground for certain emotional and psychological vulnerabilities. Jessicka must not only face and assimilate the difficulties of her disability everyday; she is forced to deal with an ever-evolving infection of much darker and existential evils. Jessicka is a young girl subjected to the psychosexual and psychic abuse emanating from places where security and trust should exist. Jessicka is the victim of incest, rape, and a forced drug abuse, each manifesting from her own family members.

The years of abuse she has endured has not only has stunted her emotional and intellectual growth, it has rendered her something little more than an animal. Jessicka exhibits characteristics of a child and of a pet within the Hoffman household. Jessicka is dragged on a leash, given rubber dog toys, kept within a cage, and when not in the incestuous prostituting service of her family, treated like the neglected family dog.

Throughout the film, Jessicka is subjected to a Pandora’s Box of Freudian psychosexual deviance at its worst human manifestation. She is forced to both participate and voyeur within incestuous intercourse, prostituted helplessly within the adult industry, and generally humiliated by those who should love and protect her.

Although seeming to be the focal point of abuse, Jessicka is only one cog within the malfunctioning machine that is her family. The interrelationships between the entire Hoffman family is dysfunctional on epic levels. Marley’s character, played with excellence by genre veteran Trent Haaga, is a conflicted soul. Marley, representing the Alpha Male within the family unit, is torn between his attraction and repulsion towards Jessicka. Marley cares for her, yet is prone to performing humiliating actions against her being at certain moments in the film. His anger towards Brad’s neglect of Jessicka’s maintenance indicates that Marley is capable of compassion towards Jessicka, despite its occasional misrouting. There is an obvious familial tension and resentment between Marley and Brad. The dynamics between Marley and Abbey yet suggest an unspoken, perhaps subconscious, understanding of the moral and ethical dysfunctions of the family relationships. Despite any cruelty in his natures, Marley is yet a provider for the family; he is performing unnecessary evils for the greater good of the family. Marley’s involvement in drug dealing suggests that even if his actions are misaligned, his heart is in the right place. Only in the end of the film do we really see the conflicted heart of Marley Hoffman.

Brad Hoffman, played wickedly by Jeff Sisson, suggests an angry and violent personality suggesting earlier parental abuse of his own. Brad’s perceptions towards both Abbey and Jessicka are callous and predatory, and this is evidenced in several places in the film. The selling of Jessicka to an amateur adult film, as well as his incestuous rape of Abbey, are perfect objectifications, fear of the feminine principle, and misogyny. Perhaps his violence towards Jessicka and Abbey on some level is a symptom of his being threatened by Marley’s obvious preference towards them.

The character of Abbey, played by Cisiany Oliver, is one that represents the archetypal elements of nurturing and compassion found within the feminine psyche of the Hoffman household. In this case it is the feminine psyche infected with long-term dysfunction. Her treatment of Jessicka, although like most of the Hoffman interplay is off track in places, indicates a genuine love and concern. Jessicka’s happy reaction to Abbey’s return home suggests something positive within a universe of Hoffman negativity. Abbey’s dressing up and caring for Jessicka shows her acknowledging that Jessicka is recognized as a real human beneath the object that is normally suffering from dehumanization. Despite this care, as earlier seen within the film, Abbey is still not immune to objectifying Jessicka. The peanut butter erotica scene implies Abbey’s deep-rooted conflicts between sexual and emotional love for Jessicka.

The dressing up of Jessicka, the making beautiful what was once perceived as less than beautiful, is a symbolic point in the film. Jessicka is adorned within dark makeup and clothes, something that is a foretelling of the darker turn her personality will be taking as the film progresses.

As the story evolves, the years of neglect and abuse suffered by Jessicka manifest more than her crooked path of personal dysfunctions. It is a cracking of the corporeal Kabalistic vessels of her consciousness wherein Jessicka unleashes primal atavistic survival mechanisms upon those within her proximity. At this point no one is safe. In this sense, the film becomes a cautionary tale illustrating the limits innocence and trust will keep in the face of repeated violence and abuse. Jessicka eventually transforms from helpless beaten prey into a rabies mad predator. She invokes a fleshed macrocosm of vengeance as any Frankenstein’s Monster would. The evolving madness of Jessicka is visually represented by her hallucinations and Matt Reel’s psychedelic cinematography.

Jessicka’s madness is not just fueled by abuse, but from the internal alchemy of her mental instability with her contracting rabies from the family dog. Rabies traditionally infects the brain and central nervous systems. Infection, combined with a challenged personality, and an emotional and psychological system damaged from abuse is a recipe for disaster.

Elske McCain plays Jessicka exquisitely. Her portrayal of the troubled girl is a haunting reminder that personal experience can always influence an actor’s successful characterization. From her mannerisms to her obsessive behavior patterns, Elske exhibits a disturbed Jessicka beautifully.

Jessicka Rabid is more than a horror film for Elske. Despite the creative input from Matthew Reel who wrote the script and played the p*rn director in the film, Jessicka Rabid is a story inspired by personal sides of the life of Elske McCain. Being the parent of an autistic child, Elske has intimate knowledge of the functioning of the mind suffering from disabilities. It is this close relationship with autism that is one of the points of Genesis for the character of Jessicka for Elske. With autism there is a degree of Neurotypical behavior that indicates a lacking in differentiation between correct social interactions and reactions. In the case of an autistic personality, as projected onto Elske’s character, conjoined with abuse and the neurological inclusion of rabies, Jessicka is a volatile character.

For Elske the sufferings of Jessicka symbolize much deeper and darker relevance. For her, Jessicka is also a living embodiment of what the experiences of cruelty and betrayal in relationships may manifest. Yet as much as Jessicka may be said to be a fictional aggregate of Elske and her autistic daughter, on a larger level the character represents two solely human traits. Jessicka represents the collective of human abuse and the loss of trust that follows.

Jessicka is a very tragic character. She is a product of her environment and upbringing. Her violent behavior is unintentional and the remorse that one can sense she feels after her killings suggest that on certain levels she is able to differentiate between right and wrong.

Jessicka Rabid is a film with a definite haunting mood to it. The background musical score adds to this dark feel permeating the film. There is a visual aesthetic within Jessicka Rabid that makes one feel as if they were viewing a film from the 1970’s. Under this paradigm it may fall under the label of homage to the Grindhouse genre. This is something that only strengthens the films mood.

Jessicka Rabid is a horror film in its purest and most primal sense. It is a film that offers us not archetypal monsters, unhinged preternatural human psychosis, or ancient esoteric spiritual evils. One may even state that Jessicka Rabid is more than a film falling beneath single genre classification. It has elements of multiple genres from horror, thriller, to psychedelic Grindhouse. It of course fits into whatever genre the viewer may process and interpret the subject matter into most comfortably.

Jessicka Rabid is a film that touches upon the most intimate vulnerabilities of the human condition. Behind its plot and visuals is something very deep.

It is a chilling testament to the psychological effects of innocence and trust defiled and destroyed. Jessicka Rabid is on one level a film of revenge, but it truly is a film of awakening. The potential struggle of good and evil within human nature will flicker its tenuous kaleidoscopic flame within the viewers consciousness. Jessicka Rabid is a film that will validate the good within those surrounding you. It may also inspire you to slowly turn towards those trusted souls close to you, and question just what evil they are capable of doing within the deepest repressed recesses of their psyche…